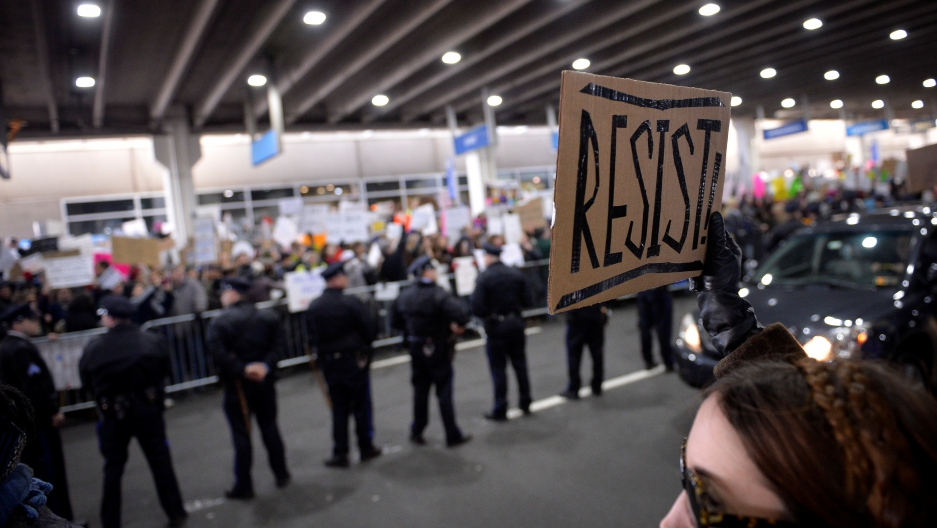 He said it on his campaign trail. He made it official on Friday.

President Donald Trump issued an executive order that bars citizens of seven Muslim-majority countries from entering the US. 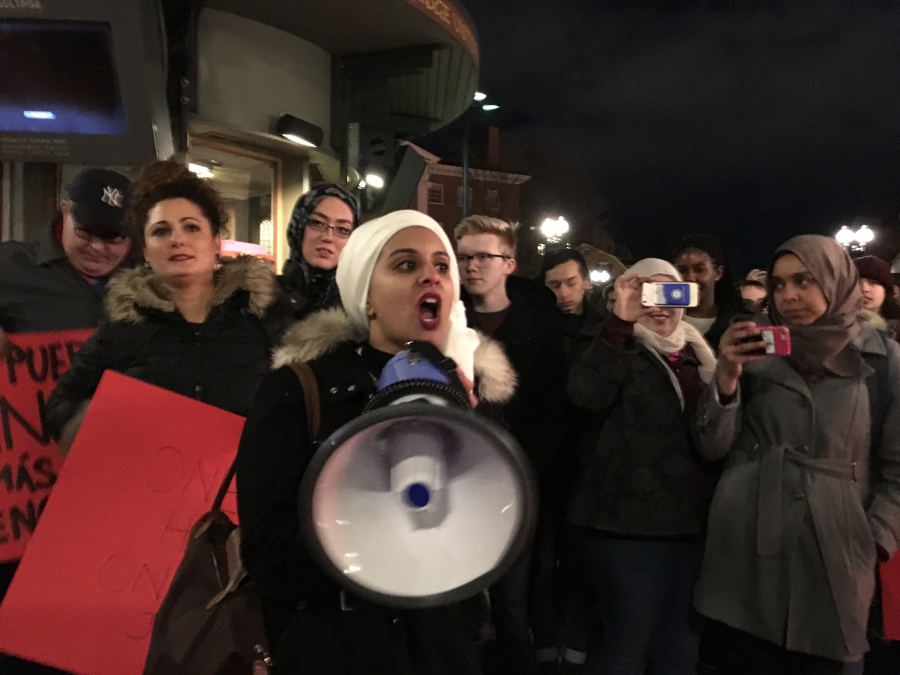 Rana Abdelhamid organized a protest in Harvard Square against Donald Trump's executive action that banned travelers from seven Muslim-majority countries to enter the US.

About 150 people came out to call for a stop to the travel ban. Rana Abdelhamid organized the protest.

"I am the child of two beautiful Muslim immigrants,” she said speaking through a loudspeaker. “And I stand firmly against any sort of blanket Muslim ban. This is not acceptable. This is discrimination. And it’s not OK.”

Resistance to Trump's order was fierce. So was the confusion — and fear — that people with visas, even green cards, would be stopped from entering the US.

Nisrin Omer is a student at Stanford University. She's from Sudan and has lived in the US for 22 years. She has a green card. Last week, she was visiting Sudan when she got a WhatsApp message from Stanford. They advised her to get back to the US.

"I'm a little bit in disbelief,” she said speaking from an airport in Sudan as she was getting ready to get on a plane to the US. “I think this is a very misguided policy."

"In a way, I feel like I’m in a time warp,” she went on to say. “It feels like I’m in the early 1940s. I can’t believe this is happening despite the fact that the United Nations exists. It feels like a violation of my rights as a human being.”

By the time Omer's plane reached New York's JFK airport, it was too late. Trump had signed the order. Omer said she was searched, handcuffed briefly and questioned. She was only allowed to make one phone call. Five hours later, at 4 a.m., she was let go.

On Sunday, the White House clarified the reach of the order, explaining that green card holders won't be barred from entering the US. But they'll face "extra scrutiny."

None of this makes people who now feel more under watch than ever rest easy.

Take Maryam Saeedi and her husband. They're from Iran, have green cards and teach at Carnegie Mellon University in Pittsburgh.

“My mother-in-law has stomach cancer,” Saeedi said. “She’s in critical condition and my husband has been going back every couple of months.”

Now, the couple is wondering whether it's too risky to travel back and forth from Iran — whether they should just stay there and take care of his mother. That would mean selling their house in the US and leaving jobs they worked years to get.

“We have been a productive member of this society,” she explained. “We didn’t feel like an outsider. But it seems that we were not really an insider.”

There are many stories like this. There are many families with one foot in the US, and the other in Iran, Iraq or any one of the seven countries on Trump's list.

People like Neekta Khorsand, a programs manager at an arts education non-profit in Baltimore, Maryland.

Khorsand's parents moved to the US after Iran's Islamic Revolution in 1979. Khorsand said she hasn't seen her relatives in Iran for years and hoped to see them this October. Her mother started the lengthy visa process for Khorsand's relatives — including her uncle — to visit the US.

“I personally haven’t seen him since I was about 13 [years old],” she said, “and I’m nearly 30 now. So it’s been a good half of my life since I’ve seen my uncle. And I’m meant to be getting married this year and we were really looking forward to it being an opportunity for us all to be together, to all see each other.”

Her brother also hasn't seen his uncle in years. "It would be so great to see the two of them actually standing next to each other,” she said tearing up.

But as long as the visa ban is in place, Khorsand’s uncle will not be able to visit the US.

Khorsand, meanwhile, will do whatever it takes to make sure her family in Iran is part of her wedding.

"If I have to just have someone hold up a cell phone and use Viber or Skype or anything like that so that they can even digitally be a part of it that would be better than nothing,” she said.

But really, she hopes it doesn't come to that.

Correction: This post has been updated to reflect that Nisrin Omer was allowed to make one phone call using airport phone. She was not allowed to use her personal cell phone.