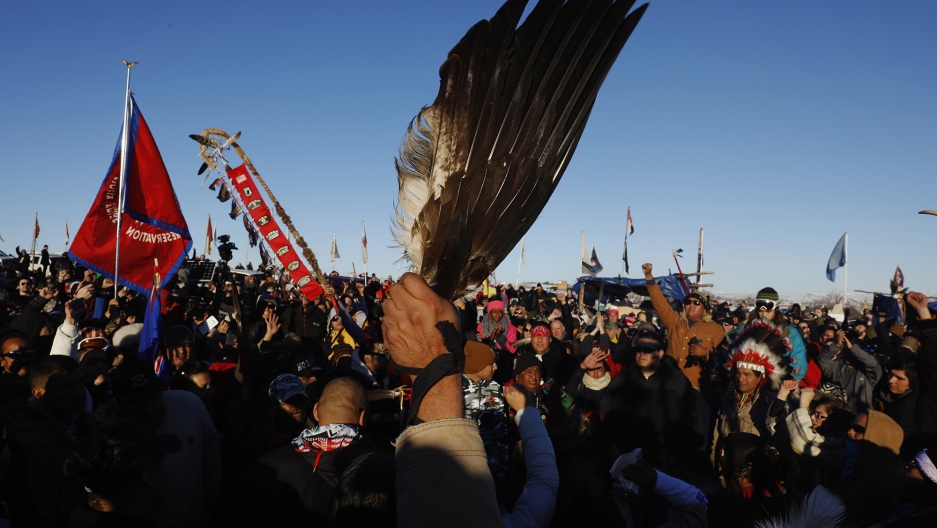 Native American protesters celebrate that the Army Corps of Engineers has denied an easement for the $3.8 billion Dakota Access Pipeline inside of the Oceti Sakowin camp near Cannon Ball, North Dakota on December 4, 2016.

Mr. President, if the Army Corps grants a permits for DAPL, how will you respond to protests?

Protesters and members of the Standing Rock Sioux tribe in North Dakota celebrated a victory last December when the Army Corps of Engineers haulted construction of a controversial oil pipeline when they delayed a decision about a construction permit. But that victory may have been short lived.

This week, President Donald Trump ordered the Army Corps of Engineers to revisit its decision and encouraged them to grant the permit and allow construction of the controversial Dakota Access Pipeline to go ahead. Many protesters believe the pipeline would cross sacred sites and threatened the Standing Rock Sioux's water supply.

While it’s still not clear how Trump's executive order would expedite the process, it's highly likely this development will lead to renewed protests. And the treatment of protesters by the Morton County Sheriff’s Office and other North Dakota law enforcement has already been controversial.

President Trump has shown little sympathy for protesters of any sort, so we're wondering how he plans to react to protesters — will he try to move them off the land by force, or engage them in a dialogue on why he thinks this project should move forward?

So, President Trump, How will you treat the #NoDAPL protesters in the weeks and months ahead. Click here to tweet him that question.