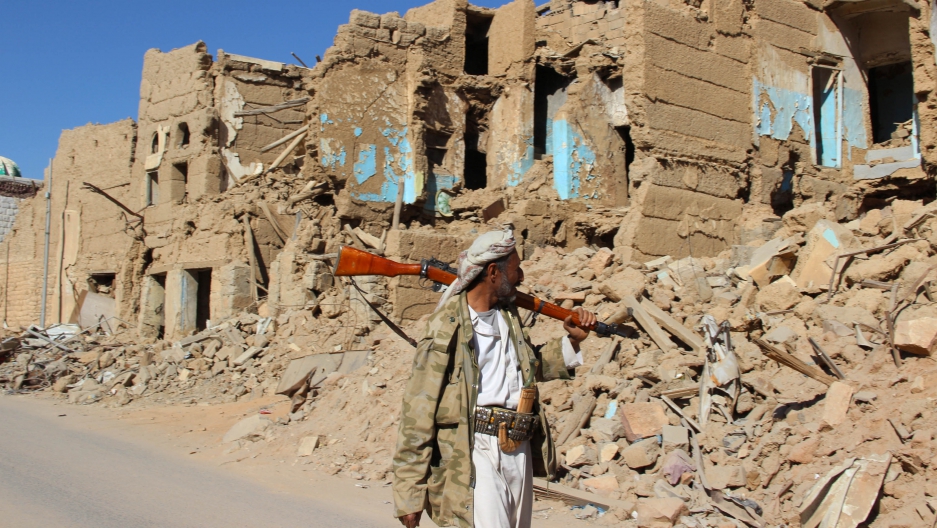 A Houthi armed man walks past destroyed houses in the old quarter of the northwestern city of Saada, Yemen, on Jan. 11.

A statement from the Yemeni Embassy in Cairo, Egypt, said the United States is now unfairly barring citizens fleeing a country where US forces are engaged in a fierce fight against terror.

Here’s an English translation we obtained of the Yemeni Embassy’s statement:

“Today [Saturday] in Cairo International Airport, the first Yemeni citizen was returned while he was heading to the US, with a prior visa. He was banned after US President Trump signed a law banning newcomers to the US from some Islamic countries (Yemen, Libya, Iraq, Syria, Somalia, Sudan and Iran).

This hasty decision was denounced by some people and considered unfair by others, and does not sit in harmony with America's international standing as well as human principles, which were always an issue that gave us a headache.

We are supporting the US and other countries to fight against terrorism, violence and radicalism and it is their right to fight and eliminate this. It is not fair to punish entire countries and put them equal to criminals.

We hope that these decisions will be reconsidered and it will get back to normal without hurting millions of people’s feelings who live in one planet with the American people, other nations and all the sons and daughters of Adam and Eve. It is noteworthy that the law bans new passengers of these countries for a period of 30 days and bans refugees for 120 days, until the White House studies this issue for a longer period. Certainly this law does not include passengers with American citizenship or green card holders, but it includes tourists, students, patients, traders, refugees and visitors.

We urge our citizens who have prior US visas to check with the US Embassy to make sure that they can enter the US without complications.”

Meanwhile, the dangers in Yemen have just been driven home again. On Sunday, the US military said a service member was killed and three wounded in an operation against al-Qaeda in Yemen — the first known US military combat death under Trump. The US said at least 14 militants were killed. Medics in Yemen also said 30 people, including 10 women and children, were killed, according to Reuters.