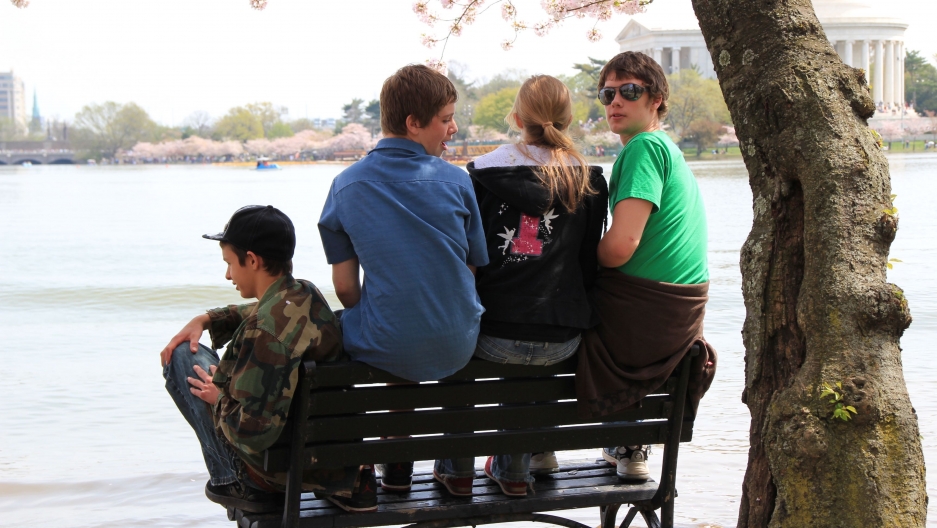 A group of teenagers hangs out at the National Cherry Blossom Festival in Washington, DC.

Teenagers can be indecisive, but new research suggests they aren’t (entirely) doing it to torture you. According to a new study published in eNeuro, picky adolescent behavior is natural — and it can actually be an asset to the maturing brain.

To arrive at the findings, scientists studied the brains and behavior of a little roundworm called Caenorhabditis elegans. Before any human teenager gets offended by the parallels, Laura Hale, a researcher at the Salk Institute for Biological Sciences and one of the paper’s co-authors, explains that the worms were chosen for study because they’re way more basic than we are.

“We are looking at the worm because it's a simpler nervous system,” she says. “And if you think about humans’ brains there's about 100 billion neurons, and then worms only have 300 neurons. And so we want to take these general principles about how the nervous system develops in a younger worm, and then try to apply these to people.”

In the study, scientists tested how well juvenile and adult roundworms could find their way across a plate to the pungent diacetyl — a yellow-green liquid that has a “buttered popcorn smell.” As Hale explains, diacetyl is also a metabolic byproduct of bacteria that the little roundworms like to eat.

Adult roundworms knew right away that the odor led them to food, and headed straight for the source of the buttery scent, Hale says. But juvenile roundworms wandered all over the plate before finally settling on their snack.

Hale and her colleagues speculate that adult roundworms go right to the odor because they’ve encountered the bacteria that produce it, and know that it’s a dependable food source.

In contrast, the young worms are less familiar with the diacetyl-producing bacteria. “And so they're wandering all over the plate because they want to get a sense of what is happening in their environment,” Hale says. “They don't want to become dependent on a food source that might not be available later.”

But juvenile roundworms weren’t so indecisive when they were exposed to bad, potentially dangerous smells. Hale notes that when confronted with negative odors, adult, and juvenile roundworms, had the same response: “If the situation is going to be harmful to them, they both run away from the odor.”

The takeaway, she adds, is that teenage roundworms “seem hardwired to respond to anything that might harm them, but they haven’t yet learned what sort of positive food sources are in their environment.”

And, their indecisiveness begins at the cellular level. Researchers monitored the brain activity of roundworms as they were tempted with diacetyl, and found that adult roundworms actually used more neurons than juveniles to respond to the diacetyl odor. When scientists blocked those extra neurons in adult roundworms, the adults began responding to diacetyl just like teenagers.

Hale says the additional neurons may help adult roundworms encode more features of their environment. But why don’t juvenile roundworms have them, too? It may be a classic “you’ll know better when you’re older” scenario:

“What we're thinking is that there's these different stages of development,” Hale says, “and that there's this stage during the transition to adulthood [where it’s] really important to have some flexibility in how you accommodate sensory information in the world.”

“And so this is just a different kind of normal stage along the process of becoming an adult, and that you have, in the teenage brain, this kind of flexible plasticity to your brain to learn new things. And then this allows you to perform certain tasks as an adult much, much more efficiently.”

The next research step, she says, is to learn more about the plasticity of the brain as it ages. That means further testing how experiences gleaned during adolescence can affect you as an adult, but also how those adult responses may change based on adult experiences.

“We shouldn't restrict ourselves to thinking that this time period has passed, and we're no longer flexible,” she says.