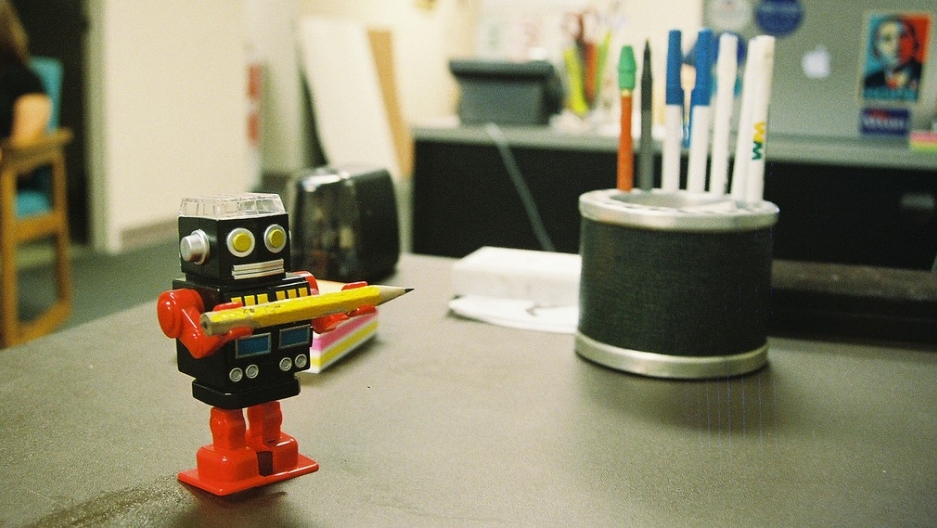 A new report estimates that half of today’s work activities could be automated by 2055. That just means we’ll be finding new ways to work alongside machines, its authors say.

Almost half the activities people are paid to do globally could be automated using current levels of technology, according to a new report from the McKinsey Global Institute.

But before we start fretting about job security — or daydreaming about lives of leisure surrounded by "Jetsons"-style robot staff, the report includes a few other key details.

For one, all that automation won’t happen overnight: The researchers think half of today’s work activities could be automated by 2055, but say it could take up to 20 more years beyond that. And Michael Chui, a partner at McKinsey and one of the report’s authors, says the findings don’t mean mass unemployment is coming. Instead, he says, given the demands of the global economy, we’ll need to find new ways to work alongside machines.

In all, less than 5 percent of individual occupations in the United States can be completely automated by current technologies, the report estimates. But in our daily work, most of us do something that could be automated — and some of us more than others.

“In about 60 percent of occupations, over 30 percent of the things that people do could be automated — either using robots or artificial intelligence, machine learning, deep learning, all of these technologies that we're hearing more and more about,” Chui says.

So far, the conversation about automation has focused on machines that replace manual labor. But Chui explains that with developments in artificial intelligence, cognitive work like collecting and analyzing data can be automated, too.

“Some of those activities are things that we're paying very high-wage and high-skill folks to do,” Chui points out. “If you look across the professions — again, whether it’s a marketer, whether it's a physician, whether it's an attorney or an accountant — a significant percentage of what they do is, in fact, collecting data and analyzing data. And that's increasingly susceptible to automation, as well.”

Looking just at the United States, about half of economic growth in the past 50 years has been tied to increases in the labor force, Chui says. “We have a growing population thanks to some immigration, as well as more people being born … more women in the workforce, etc. But as the country ages, that demographic dividend is basically going to disappear.”

In the future, then, we may need all human and robot hands on deck to sustain economic growth — but that will bring its own challenges. “What we ought to be doing is trying to solve the problem of ‘mass redeployment,’” Chui says. “How can we continue to have people working alongside the machines as we go forward?”

As it turns out, in the United States, mass redeployment isn’t an entirely new phenomenon. According to the report, in 1900, 40 percent of Americans were involved in agriculture. Today, that number is less than 2 percent, thanks, in part, to technology. “We don't have 30 percent unemployment because, in fact, we found new things for people to do in the economy,” Chui says. “So we have … historically been able to do that.”

When it comes down to it, it may take time to retrain workers affected by automation. But rolling out large-scale automation will take time, too, Chui says.

In the report, the researchers did some math on how long it takes people to adopt new technologies. They found that technology can take anywhere from eight to 28 years from the time it’s commercially available to when it’s co-opted throughout the economy. And when it comes to widespread automation of our work, Chui says there are other factors that could affect the timeline.

“There’s a political question, there are also questions about what one finds acceptable,” he says. “I mean, there was a time when people would say, 'You know, if I go to a bank, I want to talk to a person, because this is an important financial transaction. I don't want to deal with a machine.' Since then, a lot of people are now transacting either [with] ATMs, online or on mobile, etc."

“And so that you know again, as we talked about that adoption curve, different people will choose to use automation in different ways over time.”