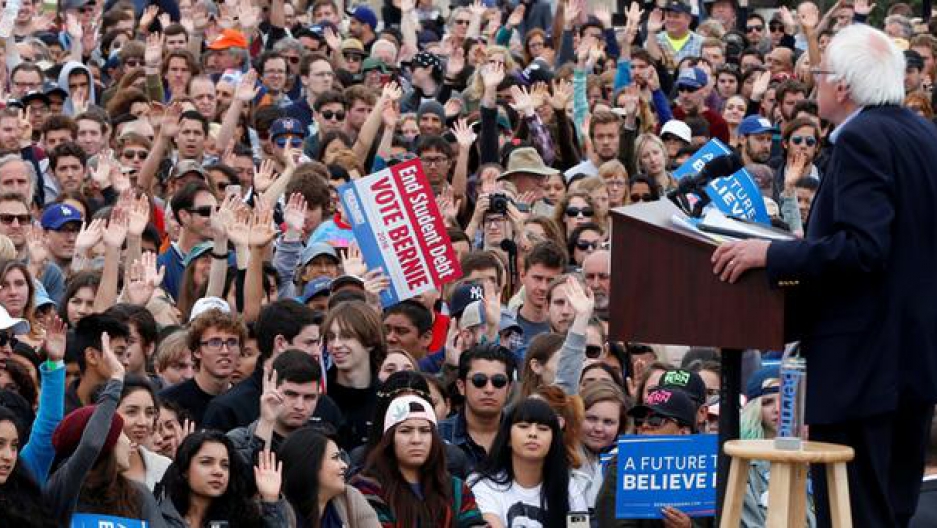 Many among a large crowd of students in Santa Barbara raise their hands when U.S. presidential candidate Bernie Sanders asks how many of them have student debt. Sanders and Hillary Clinton, the Democratic nominee for President, each released comprehensive plans to tackle student debt. President Trump's plans remain vague.

Mr. President, what will you do to alleviate student loan debt?

In his inaugural address, President Donald Trump said that one of the most important things a nation can do for its citizens is offer them a good education.

We have “An education system flush with cash,” Trump said, “but which leaves our young and beautiful students deprived of all knowledge.”

Whether America’s “young and beautiful students” are “deprived of all knowledge” is up for debate. What we do know is that lots of those students are following up their secondary education by studying at colleges and universities.

The National Center for Education Statistics predicted that 20.5 million students would enroll in US institutions of higher education in fall 2016. That’s about a 25 percent increase since fall 2000.

Along with enrollment numbers, the nation’s student loan debt is increasing. And the rate of growth is alarming.

Making matters worse: Student loan debt is among the worst kinds of debt. Most people can’t claim the interest as a deduction on their taxes. Navigating rules on qualifying for forgiveness programs can be like trudging through a maze. And even declaring bankruptcy doesn't erase student loan debt.

Not all students are carrying the burden equally. A study released earlier this month by public policy organization Dēmos finds that while 1 in 5 Americans — about 44 million in total — and about 1 in 3 millennials count student loan debt among their monthly expenses, over half of African American households younger than 40 are paying off student loans. Their study suggests that race also predicts which borrowers are more likely to default on their loans. As of 2014, 36.6 percent of all white debtors were either in default or “seriously delinquent” compared to 52.6 percent of African Americans, 52.5 percent of American Indians, 43.7 percent of Latinos, and 36.9 percent of Asian borrowers.

On the campaign trail in October, Trump said he was in favor of instituting a student loan repayment plan that would allow borrowers to make payments proportional to their income. He even suggested he was on board with forgiving the balance for borrowers who have consistently made their payments on their loans over a period of time.

Although Trump says he will “work with Congress on reforms,” details are scarce for the new president’s plan to reduce student debt.

So, President Trump, how specifically will you ease the debt burden of millions of American students? Click here to tweet him that question.