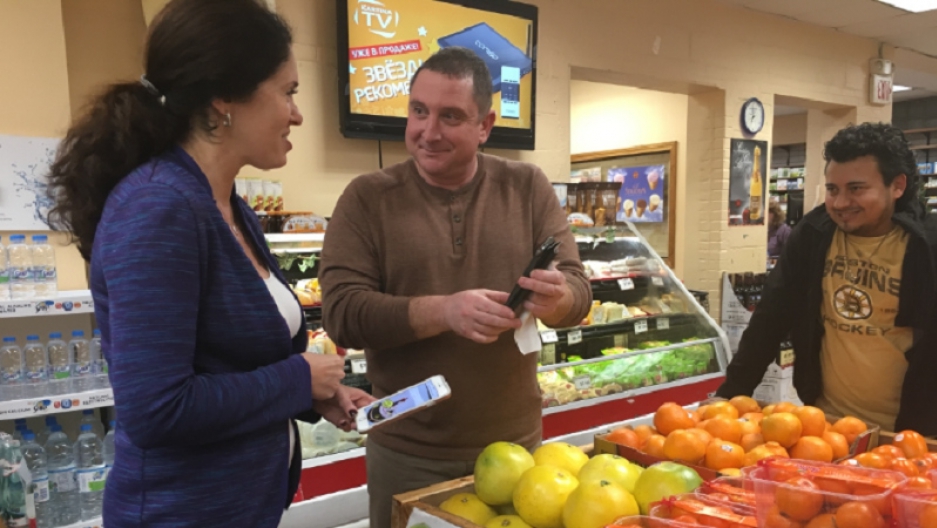 Between Boston's Charles River and nearby leafy Brookline, there’s Allston. It’s one of Boston’s dense, concrete neighborhoods and a hub for the local Russian community.

US-Russia relations have been a source of political intrigue this election season, and many in this Boston community have been watching closely. Now that a new president occupies the White House, three different generations of Russian Americans are taking stock — and each generation feels differently about Donald Trump’s relationship with Vladimir Putin.

Zabota is tucked away on a congested side street, behind a parking lot. It’s a senior center frequented by many of the community’s Russian Jews.

“This is whole community. It’s very nice, very friendly,” says Rozaliya Brodskaya, looking into the dinning area. She’s about to sit down to a breakfast of Russian farmer’s cheese.

Often over meals, the conversation turns to politics. And Brodskaya says there are some things she and her senior center buddies agree on: “Mostly whole Russian community, they voted for Trump.”

But in this community, you can’t talk about politics without talking about Putin.

“I love him very much. For everything,” Brodskaya says.

Yeva Veytsman, who has been coming to Zabota for eight years and grew up in Soviet Russia, bristles at Putin’s name.

“I hate him,” Veytsman says emphatically. “When I see him in the TV, I close my eyes.”

Yet, she says she’d like to see Trump — whom she supported — get along with Putin.

She says that, without cooperation, the world would become unstable. There might be an increase in terrorism. Perhaps a third world war. Or the Cold War could begin again.

Yuriy Blyakhman owns a supermarket a few blocks from Zabota, where similar conversations often unfold beside jars of pickled cabbage and over the deli counter.

He’s convinced “it is the Cold War right now.”

Blyakhman grew up in the former Soviet Union, along with co-owner Sabina Roytman. When they re-met in Boston, they started a chain of stores catering to people from the former Soviet bloc — many of their customers are in their 40s, 50s, and 60s.

When the talk turns to politics, Roytman and Blyakhma agree that there’s no consensus on Trump. But, they say, their generation agrees on Putin:

Yet, as much as they don’t like Putin, they too want Trump to like him — or, at least, talk to him and work with him.

Roytman agrees: “We need to learn each other, in order to know what’s going on. You need to talk to each other."

While Sabina Roytman wants Trump and Putin to talk, she and her daughter try not to talk about politics at home.

Roytman’s daughter, Annabel Epstein, says when she and her mother do start talking, “it usually ends up in a lot of arguing and it does not end well."

So when Epstein — who has lived in the US for eight years and is now a college student in DC — decided to go to the Women's March, her parents were not pleased. They'd both been rooting for Trump.

Epstein recalls that her step-dad had a question: "He was asking me if I was being paid to march."

Her mother had another response. "She doesn't really get protesting, in general. She kind of thinks it's useless."

Epstein thinks that's a legacy of her mother's upbringing in Communist Russia. But she says that here, where people can make a difference, she wants US officials to stand up to Putin.

"As long as Putin has a lot of human rights violations that are going on in Russia, I don't think that Americans should be showing support for his actions."

While Annabel Epstein may disagree with her parents and her community elders on how Trump and Putin should interact, they all agree on one thing: Even if they are now far from Moscow, the Russian relationship with the US is an issue that hits close to home.