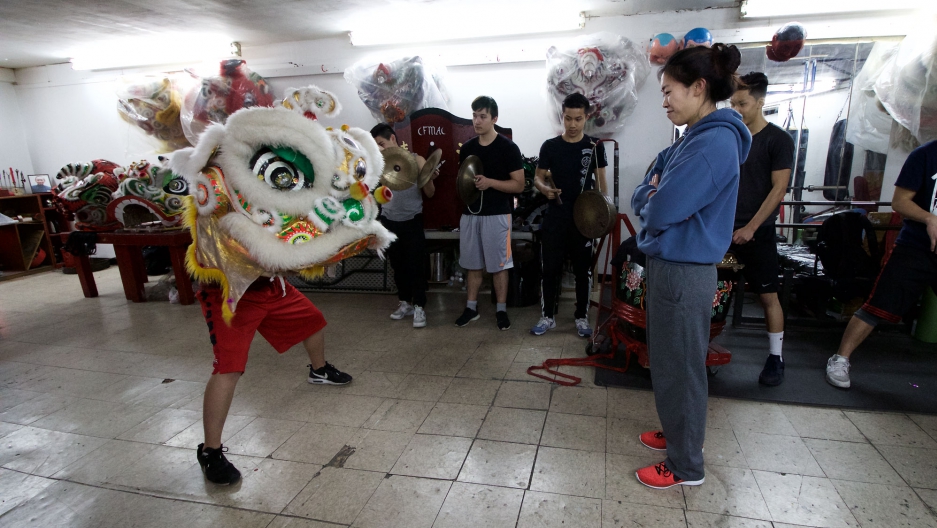 Kelly Wong is one of the lion dance instructors at the New York Chinese Freemasons Athletic Club. Originally founded as a fraternal society, the Freemasons were among the first troupes in Chinatown to train women to lion dance.

On the fourth floor of a shabby walk-up fronting one of the busiest streets in New York's Chinatown, lions are dancing.

The New York Chinese Freemasons Athletic Club (more on that name in a second) hosts what’s believed to be the longest-running lion dance troupe in New York City. For this year’s Lunar New Year Parade, pairs of lion dancers will again don giant papier-mâché heads and colorful synthetic tails to cavort through the streets — blessing businesses, thrilling tourists and discreetly collecting cash. This year’s will be the club’s 61st annual parade.

Back in the 1960s, there were fewer than 10 troupes participating in Chinatown’s Lunar New Year parade; today it’s more like 40 or 50. 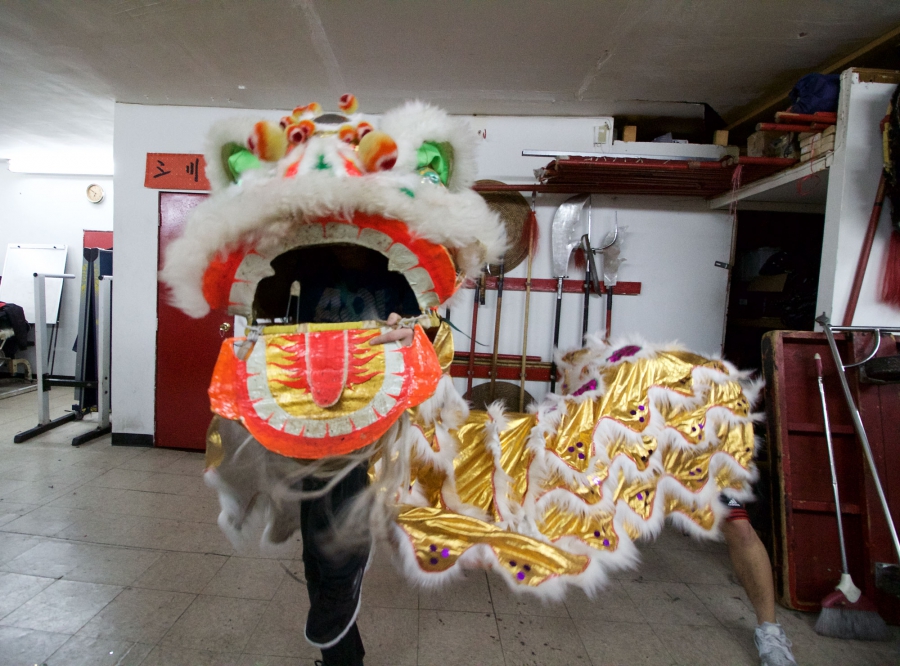 Dancers are supposed to control the lion head's ears and eyes by manipulating four strings with one hand, while the other supports and moves the head.

The dancers make it look easy, but that head can weigh up to 30 pounds, and swiveling it around on your forearms when you can see almost nothing but your feet requires a lot of flexibility, strength and balance.

“It’s not like in the movies — the guy reads a book and then he's flying through the air,” says Karlin Chan, one of the club’s veteran lion dancers. He joined the troupe as a 10-year-old, back in the late ’60s. Chan explains the Chinese Freemasons practice a form of “southern lion dance” based on kung fu.

“You had to learn martial arts before the master of the system, your particular shifu as they’re called. Your instructor would teach you the basics of lion dancing,” he says, “because lion dancing was for the top students.”

Today, training is still based on kung fu stances, but only the leg forms.

When I arrive, about nine guys are hunched in a wide, low squat known as the “horse stance.”

Their teacher is a woman.

Considering martial arts is almost equally popular with men as with women in the US, this shouldn’t be surprising. But lion dancing was traditionally reserved for men. And the same goes for membership in the Chinese Freemasons.

“It was all a bachelor society,” Chan says. “Women were not allowed in.”

The Chinese Freemasons (no relation to European freemasonry) came together in the late 1800s to support immigrants from China.

“They had these halls where people would come to get news from their home villages and whatnot,” Chan says.

This club remains steeped in tradition, with a Buddhist shrine taking up a large corner of the room. Back when Karlin Chan joined it was still all male, and all Chinese. But in the ’70s, they started letting non-Chinese kids who wanted to lion dance become members. And in the ’80s, the Chinese Freemasons became one of the first New York Chinatown troupes to welcome women lion dancers.

“I guess someone decided, ‘hey, we're in the US now. Let's do something different,’” says Prima Lai, who joined the Chinese Freemasons 15 years ago, when she was 12. Her stepfather, a member, offered her a deal.

“He said, if you join the Freemasons, you can get kung fu classes for free. Free kung fu Classes? Who's not going to say yes, right?” 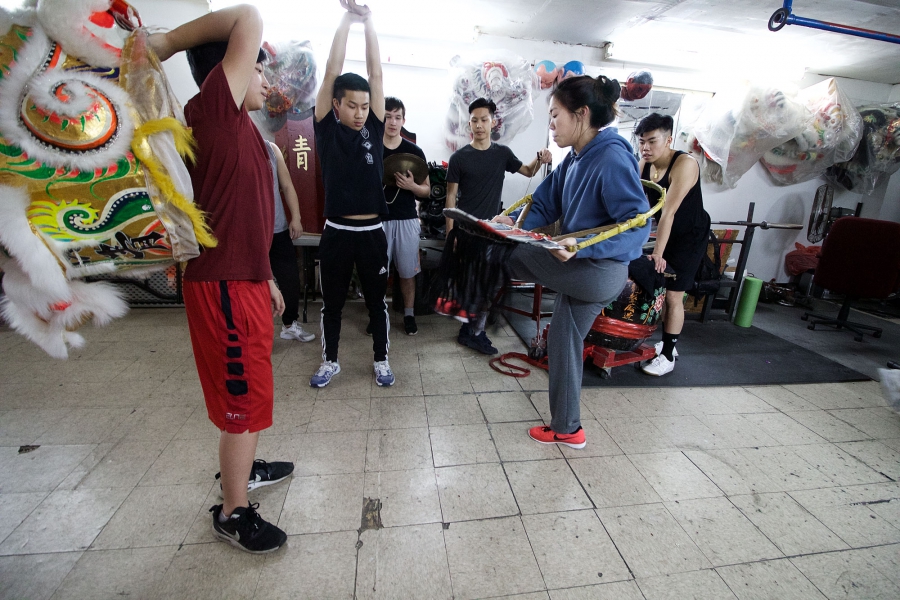 The catch? She had to learn how to lion dance too — that’s actually how the club earns most of its money. There was only one other female member at the time, but for Lai that wasn’t an issue.

Today, Lai is an instructor — and there is definitely still no special girl treatment.

“There are certain weeks when we’ll do about 500 push-ups in a night,” says Avril Saavedra, 17. She joined the Chinese Freemasons last year after volunteering as a runner — someone who dashes into shops along the parade route to see if they’ll pay for a performance. She came with a friend, Prima Lai’s sister.

“Once I came up here and I saw what it was, I just thought it was the coolest thing ever. And I said, well, would it be possible for me to join, which was kind of out there for me because … I'm not Chinese.” 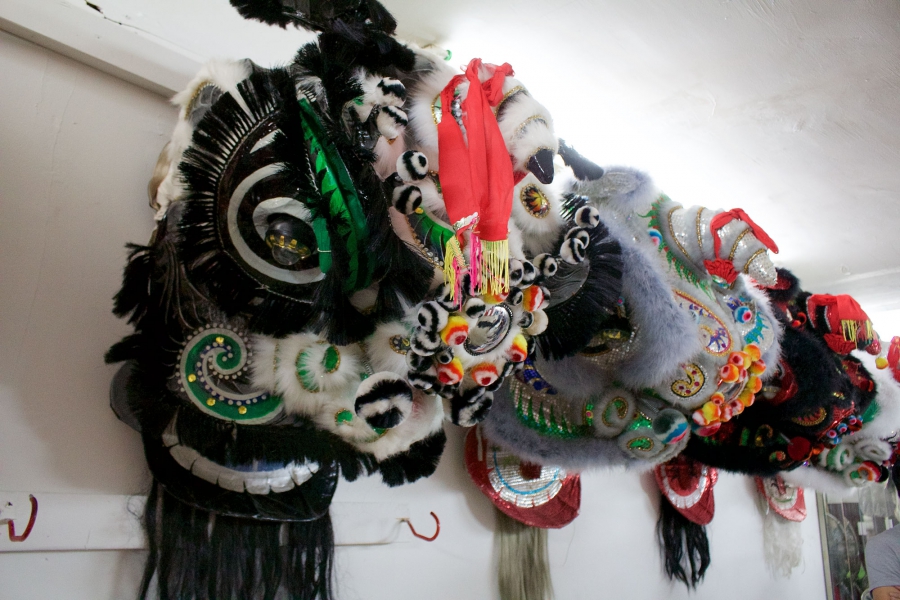 The head used for the Chinese lion, which includes a horn growing out of its forehead, is an imaginative interpretation of an animal not native to ancient China, incorporating elements of the dragon and other mythical beasts.

Saavedra was born in Uruguay. “Surrounded by cows,” she says, laughing. “But my friend said if you're willing to do a lot of work and to have a lifelong commitment to this club ... then you can join us.”

That’s as a trial member. Becoming a full member can take years.

Despite their openness to new members like Saavedra, there are still only three active women lion dancers in the troupe out of about 60, something Lai attributes to the hardcore training, but also some lingering “anti-female traditions,” she says.

“For example, women are not allowed to touch the head if they are on their period ... because the lion head is supposed to bring you good luck and if you're bleeding it's bad luck,” she says. “I think ... nobody wants to be that person to say, let’s forget what our ancestors told us.”

Saavedra says she’s also aware that some retro attitudes toward women persist, but “we as a group are trying to change that.”

Next fall, Saavedra is moving to Boston for college, but she still plans to come back to lion dance in New York’s Lunar New Year parade, and to keep up her membership in the club.

The Masonic commitment, Chinese or not, is real. 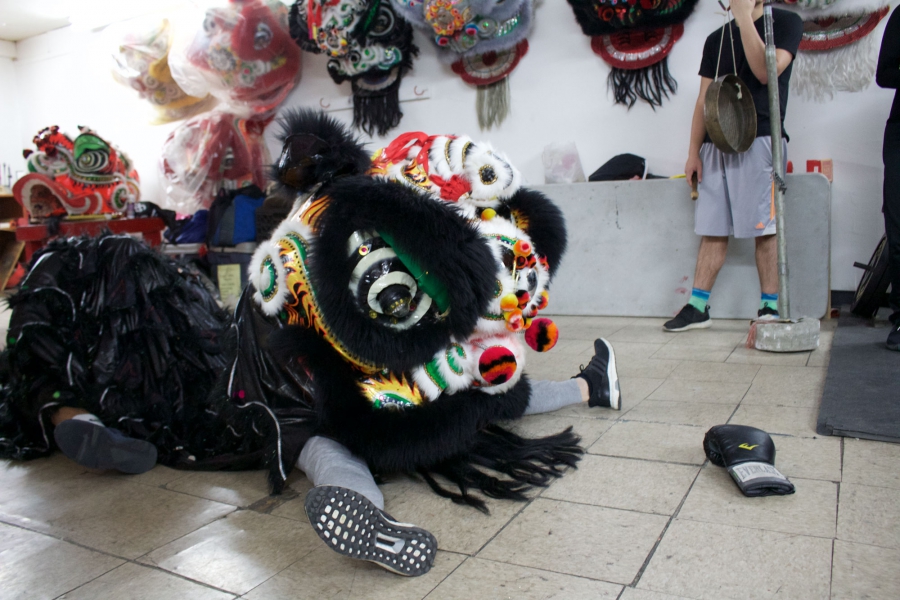