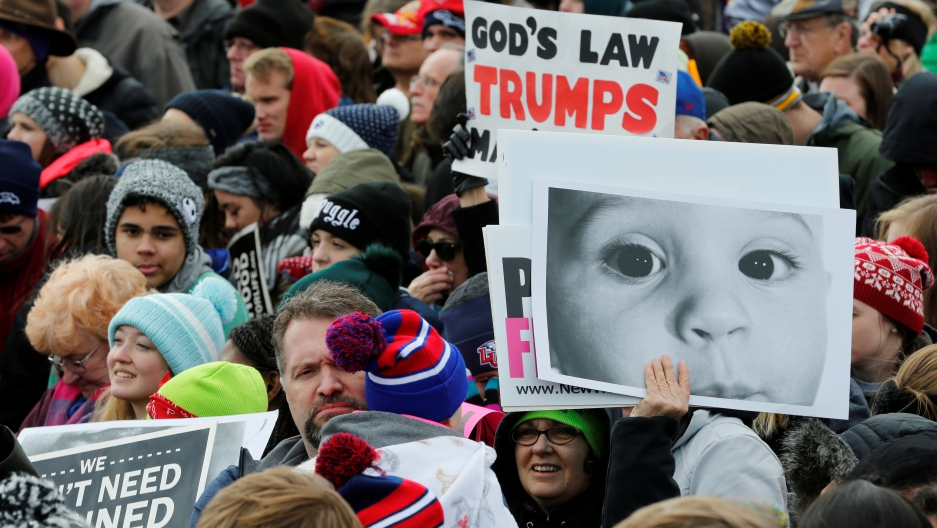 Thousands of protesters gathered for the annual March for Life rally in Washington, DC.

Latinas are increasingly vocal participants in the March for Life, the gathering of anti-abortion activists that descends yearly on the National Mall.

That's according to Dr. Grazie Pozo Christie, a Miami resident who traveled to Washington, DC, for Friday's demonstration.

"The United States is becoming more and more Hispanic. It's Hispanics that are having children, and, of course, the immigration is very big from Hispanic countries," she says. "We are very much traditionally a pro-life culture, we believe in the dignity of life, even the very small and vulnerable life."

Christie grew up in Guadalajara, Mexico, and came to the United States at age 11. She says the anti-abortion movement in the US attracts a cross section of society, and embraces Catholics from Latin America.

"People who are for the dignity of life find contradictions in political parties because we don't always fit perfectly into any category, and we don't expect to fit perfectly into neat political categories," she says. "But Mr. Trump is shaking up the equation tremendously, and we are very hopeful from the pro-life position."

On Tuesday, President Trump signed an executive order to reinstate a policy barring US aid to groups performing or promoting abortions abroad. The Oval Office photo depicting the event ricocheted around the internet. It showed the president and a half a dozen men — all white — standing behind him.

The lack of diversity in the photo didn't bother Christie.

"We don't see it that that way," she says. "We believe that good ideas come from men and women. And as long as the idea is good, we don't care who's promoting it. We are free and open that way."

At this year's March for Life, protesters heard from a sitting vice president for the first time. Kellyanne Conway, President Donald Trump's senior adviser, also spoke at the event. Conway recently told The Washington Post that she understands why some women would have an abortion. Asked if those women shouldn't have been allowed to have the procedure, she told the Post, "No, I don't judge them."

Nikki Haley, the new US ambassador to the United Nations, said in her confirmation hearing that although she opposed abortion, she supported funding for contraceptive services in foreign aid programs.

But Christie faults the US for promoting reproductive rights globally under the Obama administration.

"There are many countries in Latin America where abortion isn't allowed at all, and that's because the people of the country don't believe in it. That's not part of their culture," she says. "So, the pressure that the United States places on these countries to align themselves with American values is a kind of imperialism that Latin Americans resist and resent."

Christie calls the anti-abortion crusaders "a largely feminine movement." And it doesn't matter to her if those devising the legislation that mandates women's reproductive choices are largely male.