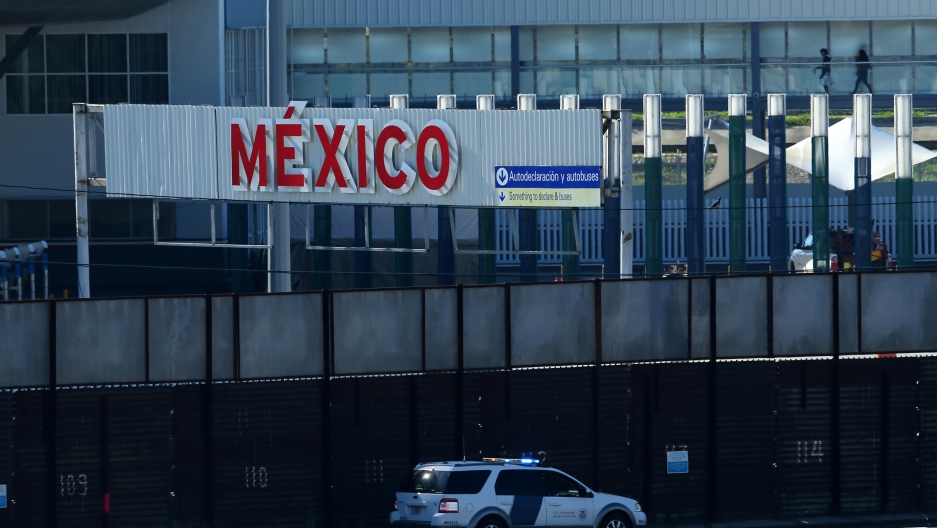 A US border patrol vehicle drives along the border wall between Mexico and the United States in San Ysidro, California, January 25, 2017.

Mexican President Enrique Peña Nieto on Thursday called off a meeting with Donald Trump as tensions over the US leader's vow to make Mexico fund a new wall on the neighbors' border boiled over.

Trump had been scheduled to receive Peña Nieto at the White House next week, for their first meeting since the inauguration. Instead, the Republican president is facing a foreign policy spat during his first week in the Oval Office.

But their escalating war of words over who would fund the proposed border wall — a central pledge made by Trump during his successful presidential campaign — escalated to the breaking point on Thursday.

"If Mexico is unwilling to pay for the badly needed wall, then it would be better to cancel the upcoming meeting," Trump said on Twitter in the morning.

The bareknuckle early-morning tweet — already a signature Trump move — shocked diplomats, but was in keeping with the mogul's hardball approach to negotiations and is likely to delight his supporters.

Peña Nieto didn't take long to rise to the challenge.

"We informed the White House this morning that I will not attend the working meeting scheduled for next Tuesday" with Trump in Washington, the Mexican leader responded on Twitter.

"Mexico reiterates its willingness to work with the United States to reach agreements in both nations' interests."

White House spokesman Sean Spicer told reporters that the "lines of communications" would remain open and Washington hoped to "schedule something in the future."

'Mexico will not pay for any wall'

The first salvos between the two presidents came Wednesday, when Trump ordered officials to begin to "plan, design and construct a physical wall" along the 2,000-mile (3,200-kilometer) US-Mexico border.

Stemming immigration was a central plank of Trump's election campaign, but he has struggled to articulate how the wall will be paid for, beyond saying "Mexico will pay."

Republican leaders announced Thursday they would try to carve out $12-15 billion worth of US taxpayers' money for the project.

Trump's order had put Peña Nieto under fierce domestic pressure to hit back, and hit back the Mexican leader did in a video message to the nation late Wednesday.

"I regret and condemn the decision of the United States to continue construction of a wall that, for years, has divided us instead of uniting us," Peña Nieto said.

"I have said it time and again: Mexico will not pay for any wall," he added.

Around two in three Mexicans have a favorable opinion of the United States, according to Pew surveys, but anti-American and anti-Trump sentiment is not uncommon.

Trump also took to Twitter on Thursday to gripe about the trade gap between Mexico and the United States.

"The US has a $60 billion trade deficit with Mexico. It has been a one-sided deal from the beginning of NAFTA with massive numbers of jobs and companies lost," he said.

That deficit for the trade in goods is slightly higher than the overall trade deficit — including services — of $49 billion in 2015.

Trump has vowed to renegotiate the 23-year-old North American Free Trade Agreement between Mexico the United States and Canada.

That renegotiation could provide one way for Trump to claim victory, through increased tariffs on Mexican goods or higher border transit costs.

But it could also risk retaliatory tariffs or blowback from US firms who export $267 billion a year south of the border.

Trump has also ordered officials to scour US government departments and agencies in search of "direct and indirect" aid or assistance to the Mexican government and report back within 30 days.

The United States is expected to provide about $134 million worth of assistance to Mexico this year, with much of the spending wrapped up in the "Merida Initiative" to combat drug cartels.

Trump was in Philadelphia on Thursday for a Republican congressional retreat, where he will have to calm some jitters.

While Trump has pursued a solidly conservative governing agenda, his outbursts over inauguration crowd size, his war of words with the media, and revival of his claim of massive voter fraud has led to concerns within his own party.

The Philadelphia meeting will feature another high-profile guest: British Prime Minister Theresa May, who will become the first foreign leader to meet Trump since his inauguration.

May, who addresses the Republican retreat shortly after Trump, will almost certainly discuss the prospects of a key post-Brexit trade deal with the United States.

The two leaders will meet in Washington on Friday and hold a joint news conference, the White House said.