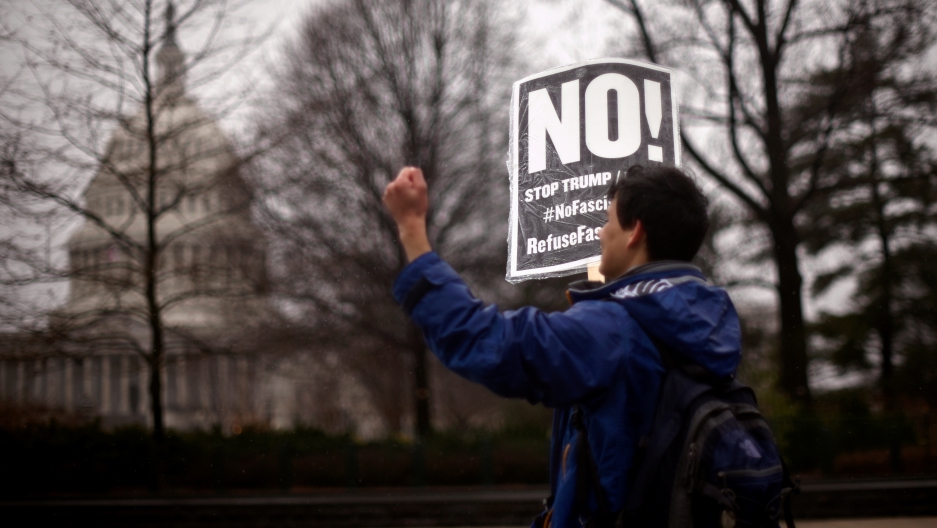 A protester organized by RefuseFascism.org participates in a demonstration outside the US Supreme Court against U.S. President Donald Trump in Washington, January 23, 2017.

President Trump, how do you plan to unite the divided American electorate?

So uniting the country, or at least convincing everyone to get along, is one of the most prominent questions facing Trump as he moves into the White House.

Though President Trump won the Electoral College with 304 votes compared to Hillary Clinton’s 227, he lost the popular vote by about 3 million ballots. On Monday, he continued making false statements that "3 to 5 million" ballots from undocumented immigrants or others ineligible to vote cost him the election. There has been no evidence whatsoever of any largescale illegal voting.

While President Trump has said he wants to be the leader of “all Americans,” he has continually taken to Twitter to attack those who disagree with him or challenge him. Recently, he attacked civil rights icon Congressman John Lewis, who claimed that Trump was an illegitimate president.

On the whole, some 45 percent of Americans disapprove of the incoming president.

With such striking divisions, we want to know: How will President Trump unite the country? Click here to tweet him that question.