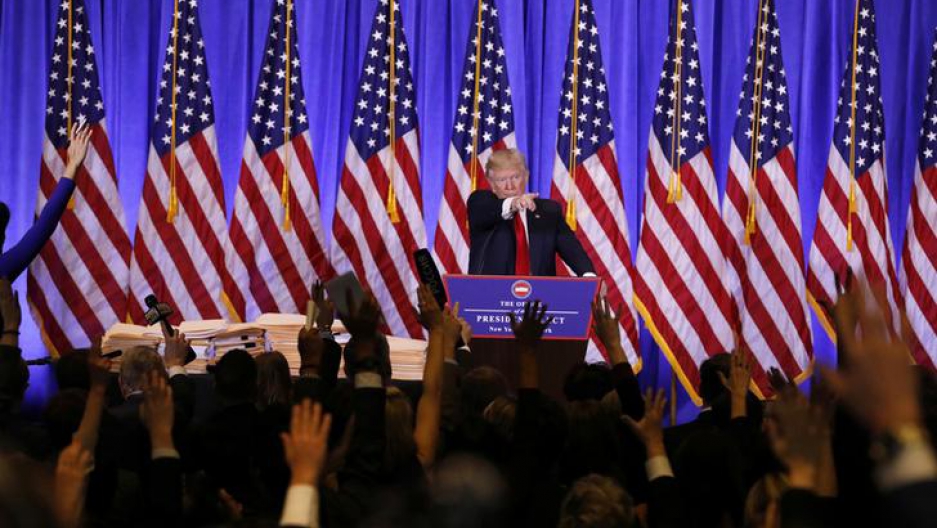 US President-elect Donald Trump calls on reporters during a news conference in the lobby of Trump Tower in Manhattan, New York City, on Jan. 11, 2017.
Credit:

It’s fair to say that facts are taking a beating during President Donald Trump's first few days on the job.

There were the claims and counterclaims about the size of the Inauguration Day crowd in Washington, and whether it rained or not when Trump spoke.

On Saturday, the president praised the intelligence agencies at the CIA's headquarters — just days after comparing their work to Nazi Germany.

There were attacks on the media.

And somewhere along the line, falsehoods got relabeled as "alternative facts."

Trump spokesman Sean Spicer seemed to double down on that during his press briefing on Monday. When asked about the dustup over inauguration numbers, he said, “I believe we have to be honest with the American people. Sometimes we can disagree with the facts.”

Disagree with the facts.

It all sounds familiar to Russian journalists like Alexey Kovalev who blogs about propaganda, fake news and Russian state media at noodleremover.news (Russian site).

In his most recent blog, “A message to my doomed colleagues in the American media,” which appears on Medium, Kovalev writes:

“Congratulations, US media! You’ve just covered your first press conference of an authoritarian leader with a massive ego and a deep disdain for your trade and everything you hold dear. We in Russia have been doing it for 12 years now  —  with a short hiatus when our leader wasn’t technically our leader  —  so quite a few things during Donald Trump’s press conference rang a bell.”

In short, Kovalev says there are some lessons he’s learned from having covered Russian President Vladimir Putin’s typical four-hour press conferences that may be useful in looking at President Trump’s comments to the Washington press corps.

For example, Kovalev says Putin and his advisers are quite successful at completely dominating the agenda. “Welcome to the circus,” Kovalev says. “Don’t be fooled into thinking that the press conferences are designed to inform the public or the media.” Instead, he says, the events are a one-man show to create a barrage of factoids and misinformation as a kind of distraction from more important issues and policies.

“The thing is that when you think it’s your mission to make him [Putin] admit a lie, or an inconsistency in his previous statements [because he tends to make U-turns in his statements on policies], when you try to point out those inconsistencies or catch him red-handed lying, there’s no point because he’ll evade your question, he knows that he can just drown you in meaningless factoids or false moral equivalencies or by using what is called ‘whataboutism.’”

Whataboutism, Kovalev explains, is an old Soviet trick. If Putin is pressed by a Russian journalist about an allegation of serious human rights abuse in Russia, he’s very unlikely to directly address the question. Instead Putin might deflect or undermine the seriousness of the question by asking, Don’t human rights abuses happen in other countries as well? What about Guantanamo Bay?

"There's probably not a nation in the world that followed US elections more closely than Russians" - rare factual statement on Russian TV. pic.twitter.com/tYAvay20pR

His advice to US journalists in the face of possibly similar disinformation tactics that now seem to emanate from the White House?

“For one thing, the American media has a distinct advantage over their Russian colleagues. You can meaningfully influence the public opinion so as to unseat Trump in the next election cycle. We don’t have that kind of privilege because that’s not how elections work in Russia,” he says.

And when it comes to the president’s tweets on this or that topic, Kovalev says, “People are completely obsessing over it, and it’s dominating the headlines, and that’s exactly the point. To keep you distracted … and meanwhile while you’re distracted with these public statements, they’re passing bills quietly that will go unreported because everybody else is too busy.”

Kovalev calls information like the Trump team’s inflated and inaccurate estimates of his inauguration crowds, the “chaff that’s thrown out to distract you from what really matters.”

So his simple advice in what he calls the “era of BS” for his US colleagues is this: “Don’t overreact. Remember you have this advantage of being able to influence public policy so do this, because the people, at some point, will stop caring. They will put out so many obvious lies that at some point the public will begin to wonder whether objective truth exists at all. They will stop caring like they did in Russia. So don’t concentrate or obsess over these nonsensical and factually untrue statements. Just concentrate on the acts, not the words.”