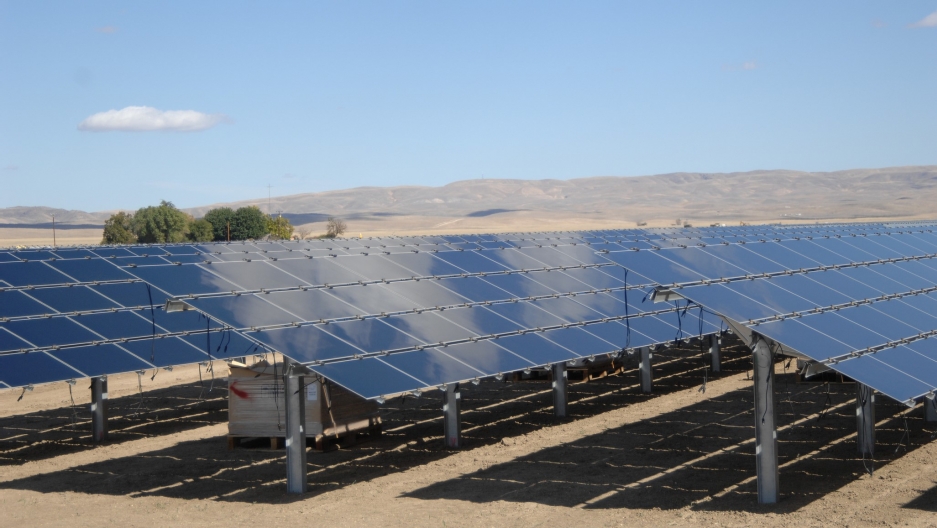 These are solar panels at Topaz Solar Farm in California.

The price of solar photovoltaic panels is coming down, and it’s great news for consumers, solar installers and the environment.

But not everyone is happy about cheap solar: The price of solar photovoltaics is so low, that, according to Bloomberg, some manufacturers were likely selling at a loss in December 2016.

Ethan Zindler, an analyst at Bloomberg New Energy Finance, says that overall, the solar industry is “booming.” But as he explains, the current price of solar panels shines a light (pun intended) on a cutthroat market for manufacturers.

“If you're a consumer who's been thinking about putting solar on your roof, now it's cheaper than it's ever been,” he says. “You used to look at a system that would cost $30,000, and it may cost as little as $10,000-$15,000 now. And so there's great opportunities for consumers in the most developed countries, those of us who have nice houses that want to put them up on our roofs.”

Another type of consumer stands to benefit a great deal from cheap solar panels: “There’s about 1.3 billion people still on our planet with no real adequate energy access,” Zindler says. “A simple module or two on a thatched roof can provide a light for the first time. There are solar lanterns that are being sold at very inexpensive prices that can really make a difference in people's lives.”

But for photovoltaics manufacturers, current conditions aren’t so bright. The competition among manufacturers is intense right now. And with the collapse in prices, many manufacturers are operating at or just below their margins. “It’s hard to make money,” he says.

Nowhere are the pros and cons of cheap photovoltaics illustrated more clearly than in China. Zindler notes that many of the biggest players in solar technology — like Trina Solar, Jinko Solar and Yingli Solar — are Chinese companies that helped spur the market. Now, they’re in some ways, victims of the market’s success. But as he points out, China is the largest consumer — and supplier — of solar.

“There's a lot of attention that gets focused on China and the amount of coal that they burn, and their CO2 emissions,” he says. “But it should not be overlooked that they are the largest market right now.”

In fact, China recently pledged to spend more than $360 billion on renewable energy by 2020. “To put that in context, that industry has already in China been attracting about $100 billion a year,” Zindler says. “So it's great to have that long-term commitment, but that's basically the size of their market.”

And many other emerging markets “also happen to be countries with fantastic solar resources, great sun,” Zindler notes. “And so adding a new megawatt of capacity in these countries from solar can really be the lowest-cost way to bring more people onto the grid.”

So for solar manufacturers, the cloudy day isn’t likely to last.

“It's an interesting industry because it's still young, so it's facing pressures right now,” Zindler notes. “But overall … the percentage rates of growth that we've seen year on year have really been quite spectacular overall.”