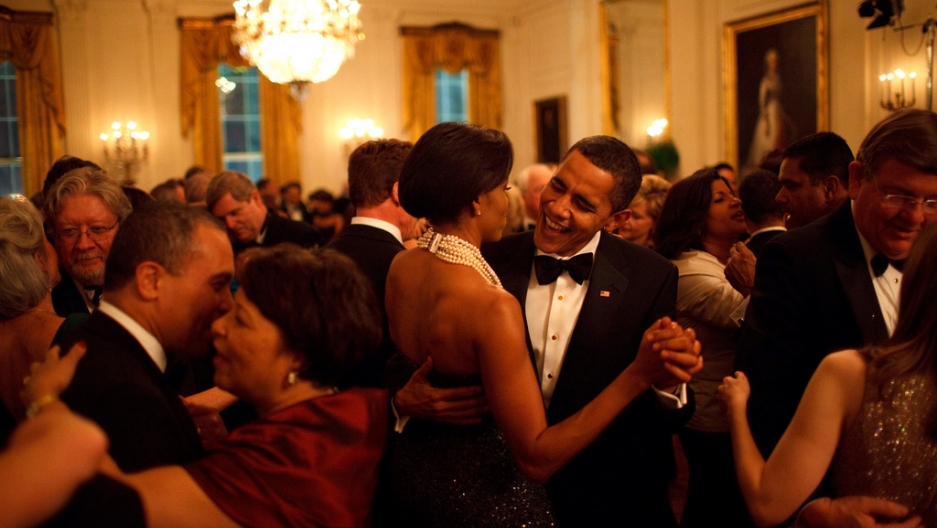 Former President Barack Obama and first lady Michelle Obama dance together at the Governors Ball in 2009.

Eight years ago, as Barack Obama was about to be inaugurated as the 44th president of the United States, Studio 360’s Kurt Andersen asked the writer and cultural critic, Cintra Wilson, to leave a voicemail for the incoming president, saying what she wanted to see from his time in office. So, she took the opportunity to not only call in a few favors but, also, to compliment his threads.

“I just want to say you are such a stylish man, and I love you, almost completely unconditionally,” she says. “I know you are busy, but if you could see your way around renouncing the theory of the unitary executive and making the executive office accountable to American law again, that would be so awesome.” And a final ask: “Oh, and it might be a nice bipartisan gesture to rebuild the Nixon bowling alley. I am just saying, do you feel me?”

All told, Obama signed more than 2,000 executive actions (although he signed fewer legally binding executive orders than any president since George H.W. Bush). In that same period, Wilson published several books, including “Fear and Clothing: Unbuckling American Style,” which devotes an entire chapter to "uncloseting" clothes and power in Washington, DC.

Reflecting on Obama’s presidency, Wilson says she doesn’t believe that Obama, given a different Congress, would have needed to rely so heavily on executive actions. “But he was facing such dire opposition his entire presidency … It was just, you know, swimming upstream the whole time.”

For Wilson, the grace of Obama’s actions was mirrored in his personal style — and she admired the first lady’s style, too. Their clothing choices sent an “international message,” she says.

“It was one of relaxed authority, sophistication, familiarity with European style and customs,” she says. “They can sit in any castle or parliament or any political institution in the world and look like themselves, you know, with their signature elegance and their hipness and their open-mindedness.”

The Obamas’ style was a departure from the usual fashion for politicians and heads of state, which can be quite rigid, Wilson notes. (In “Fear and Clothing,” her chapter on Washington, DC, is subtitled, “War and Pleats: I Love a Man in a Command-Form Fashion Statement.”)

But that doesn’t mean the Obamas’ fashion choices were always beloved. On election night in 2008, Michelle Obama wore a black-and-red dress by designer Narciso Rodriguez that was panned by some in the media.

“It looked sort of like a bloody French maid costume, which I thought was really ironic,” Wilson says. “Like, look, we're coming in to clean up the country now. I don't know if she intended that joke or not, but I thought it was really sophisticated.”

But what Wilson admires the most about Michelle Obama’s fashion sense? “It wasn’t always considered correct,” she says. “People would occasionally go into a great kerfuffle over, you know, the fact that her beautiful arms were showing … I mean, she seemed so threateningly radical to people who wanted everybody to dress like Lady Bird Johnson.”

“And Obama — that man can wear a suit like nobody's business. He always just looks like … you know, the other member of the Rat Pack, who was just as cool as Sinatra.”

But Obama wasn’t always dressed like a Rat Pack extra: In 2009, he wore “dad jeans” to throw out the first pitch of a Major League Baseball game, and the internet noticed. “I’m a little frumpy,” Obama told journalist Meredith Vieira, after she gave him a chance to defend the pants. “I hate to shop. Those jeans are comfortable.”

The dad jeans episode has haunted Obama, but Wilson thinks his response to Vieira was a bit tongue-in-cheek. After all, no one’s mistaking Washington, DC, for the “style capital” of the United States.

“I mean, dad jeans are pretty much the only thing a Republican can respectably wear in Washington, DC,” Wilson says. “Anything else, you know, you're going to look a little too Italian.”

Plus, she argues, as commander in chief of the United States military, Obama’s denim options were limited. “It’s not like he can go around in some kind of 7 For All Mankind, rhinestone-pocketed, Ed Hardy, you know, boot legs,” she adds.

“Oh yeah, he’s got the common touch,” she says.