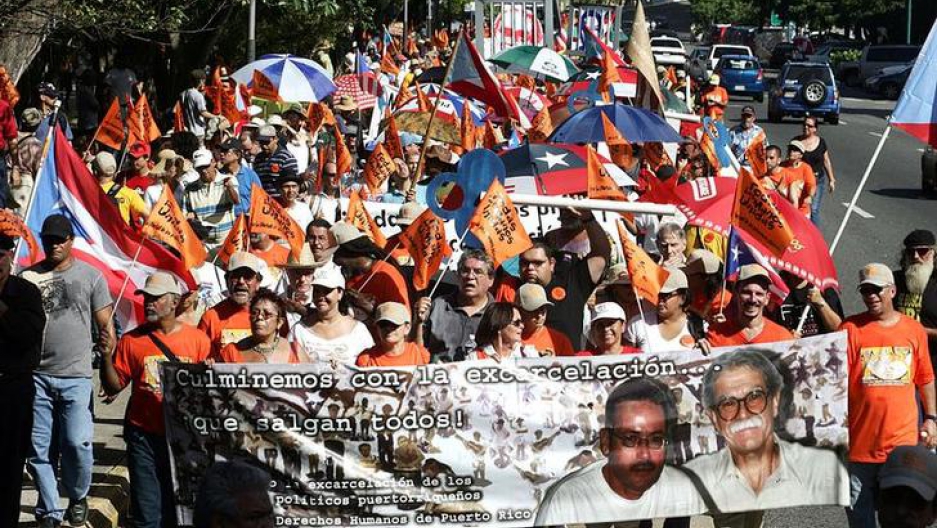 The Puerto Rico Human Rights Committee and other political groups march to demand the release of pro-independence activists Carlos Alberto Torres, Oscar López Rivera and Jose Perez Gonzalez in San Juan, Puerto Rico, on Oct. 8, 2006. Torres, López Rivera and Perez Gonzalez are political prisoners being held in US prisons. The banner reads "Let's complete the release of the Puerto Rican political prisoners. Free all of them ... "

Among the 273 people who were pardoned or had their sentences commuted this week by outgoing President Barack Obama was 74-year-old Puerto Rican nationalist Oscar López Rivera.

"Oscar," as he’s known to supporters, was linked to a Puerto Rican nationalist group, the Armed Forces of National Liberation, which carried out bombings and other crimes in New York, Washington and Los Angeles in the 1970s and 80s — all in an effort to gain independence for Puerto Rico.

In 1981, López Rivera was convicted of seditious conspiracy (use of force to commit robbery, and conspiracy to transport explosives) and sentenced to 55 years in a US federal prison. He’s currently being held at Terre Haute, Indiana, and has served 35 years of his prison sentence.

Obama's commutation means he should be released in May. News of López Rivera’s commutation reverberated across the streets of San Juan and Chicago, where his supporters have long demanded his release.

Among those celebrating the news is López Rivera’s brother.

“Everybody broke out in jubilation, we were ecstatic. It was an amazing moment of this historical, incredible news,” says José López, executive director of the Puerto Rican Cultural Center in Chicago.

@POTUS I commend you for doing what is right. Now #OscarLopezRivera will return to his island, his people & his family. ¡Gracias! pic.twitter.com/rpxOrFVsTa

López Rivera’s lawyer, Jan Susler, told The Associated Press that she was the first to tell López Rivera of his commutation. "He's very, very grateful," she said, adding that López Rivera is scheduled to be freed May 17.

“He wants to live in Puerto Rico, and people there really want him to come home," said Susler. José López echoes that sentiment, saying that when his brother eventually returns to Puerto Rico, it will be a remarkable homecoming.

“Oscar’s release was a moment of jubilation in Puerto Rico, there’s incredible excitement. Oscar’s cause has united the entire Puerto Rican nation. In Puerto Rico we are extremely divided politically, in terms of the political status of the island, yet Oscar’s cause brought everyone together.”

José López praises Obama’s decision, calling it “an incredibly brave decision." He says by releasing Oscar, Obama is helping to begin a process of reconciliation with the Puerto Rican people. “The US has controlled Puerto Rico since 1898, and this message of President Obama to the Puerto Rican people is a message that we need to enter into a serious process of resolving the colonial quagmire, which is Puerto Rico. I believe this is an incredible moment," says José López.

When asked if he thought his brother’s release from prison was tantamount to that of Nelson Mandela’s release from Robben Island, José López says, "Absolutely."

But while the future may seem bright for Oscar, there are still those who hold him responsible for his ties to the violent nationalist group.

"I'm willing to forgive, but he never once said he was sorry, showed no remorse at all,'' Mary Connor Tully told the AP. Her husband was killed in a 1975 bombing attributed to the Armed Forces National Liberation. It was an attack on the Fraunces Tavern in New York that killed four people and injured 60. "He's an old man and he'll get to live his life free, and hopefully he can live with the sins he committed, and that he'll answer one day to a higher power than us for what he did."

But it’s important to note that López was not convicted of having a direct role in that bombing. “Oscar was never, ever tied to any of the bombings and in particular to the bombing of Fraunces Tavern in 1975 and Oscar had nothing to do with it," says José López. "Even more importantly, if the US government, the FBI, had any inkling of evidence to tie my brother to the bombings of Fraunces Tavern, he would've been given the death sentence. He would have been probably already dead.”

“Seditious conspiracy is a thought crime, not a crime of action so I don't agree that my brother had anything to do with any of the bombings or killings," José López adds. "I don't know where there's information in any way, shape or form that links my brother to any of those incidents."

And José López adds that despite serving 35 years in prison, at least 12 of which were in solitary confinement, his brother Oscar still has hope. “It’s a lesson that I’ve learned from my brother, on how to find inner peace in spite of all the adversities that one faces particularly in a situation like he was under for 12-and-a-half years,” says López.