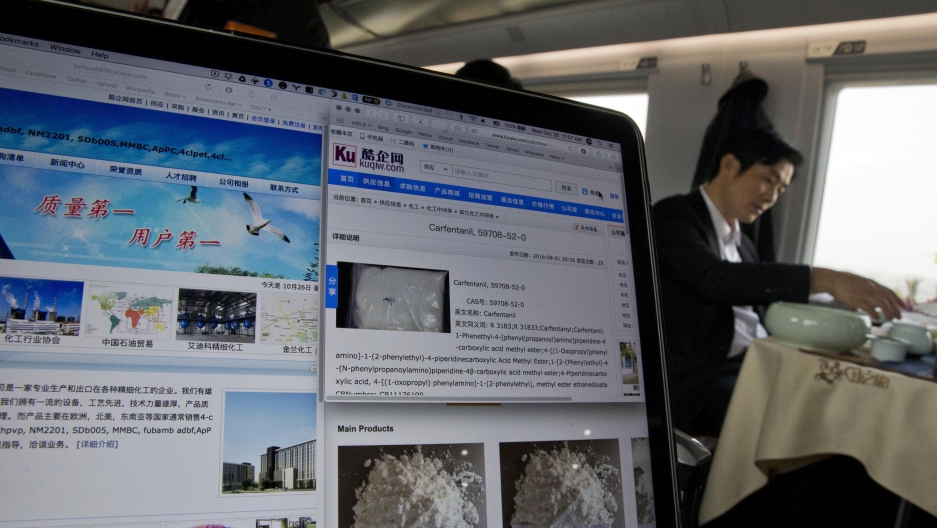 A man drinking tea — on a train leaving Beijing in October 2016 — is shown here, near a computer displaying a list of companies selling the lethal synthetic opioid, carfentanil, online. Use of the deadly chemical, carfentanil, has exploded across the US, with more than 400 seizures in eight states since July. China is the main "source country" of the drugs in the US.

China has announced it will ban carfentanil — a lethal opioid 100 times more potent than fentanyl — as of March 1.

Carfentanil became a new and deadly factor in America's opioid epidemic when it started appearing on US streets during the summer of 2016, driving up rates of fatal overdoses. The drug has been entering the United States through an unlikely portal: the US Postal Service.

National security analyst Juliette Kayyem says this vulnerability needs to be addressed: "Homeland security has to be about risk reduction and about the vulnerabilities in our system, and while over the past 15 years we've tightened up airline security, cargo security, maritime security, we've done almost nothing with mail," she says.

Carfentanil is one of the latest and deadliest synthetic opioids to show up in the United States. Erika Kinetz, a journalist for The Associated Press who is based in Shanghai, saw how carfentanil went from legitimate use to abuse in the midst of her reporting on China and the opioid crisis. "It was developed in the 1970s as a tranquilizer for large animals. If you look at the literature about carfentanil, though, you see all these reports in scientific papers about how to tranquilize moose and elephants. Then suddenly in July of 2016, you start seeing reports about carfentanil leading to drug overdoses in Canada and the United States."

Since then, the Drug Enforcement Administration has reported hundreds of seizures of carfentanil — initially in Ohio, Florida and neighboring states — and last month, it began showing up in New York, Pennsylvania and New England. The DEA says China is the main source for carfentanil and that it's getting to the US through two major routes: Mexico via drug cartels, which are processing and shipping the stuff across the US border, and through the US mail.

From her base in China, Kinetz perused the web to see how easy it was to buy carfentanil. She and her colleagues found that "it was very easy. We certainly got a lot of offers for many different opioids. We were focused initially particularly on carfentanil because it's one of the strongest opioids in the fentanyl class of drugs, and it's been used in the past as a chemical weapon. And just looking on the open internet, I found over a dozen companies that were happy to offer carfentanil for sale. Sometimes they would guarantee delivery to major Western capitals. Some companies would offer advice on how to best sneak packages past customs."

Kinetz says Chinese officials acknowledged the country's role in the carfentanil trade, but initially questioned the DEA's assertion that it's the main source of the lethal compounds "simply because the US has not provided any data to China to prove that it is, in fact, the main 'source country.'" All that changed on Feb. 16 when China's Ministry of Public Security announced the ban, which closes a major regulatory loophole in the fight to end America's opioid epidemic.
Kayyem, the national security expert, says the reason there hasn't been good data to date is that US still has no effective mail screening process. "We actually don't require advance electronic data screening of mail, like, 'who sent it,' 'who's it going to,' 'what's in it' [and] the weight and quantity of materials." Kayyem says creating such a system would enable US officials to identify trends, figure out neighborhoods in China where carfentanil is coming from and help officials create a no-screen list.

"Once it enters this country, it's essentially too late. People should think about it like airport security. All the screening of foreign travelers is done before they get on a plane because once they're here, it's impossible to stop it. We should do the same for the mail system." 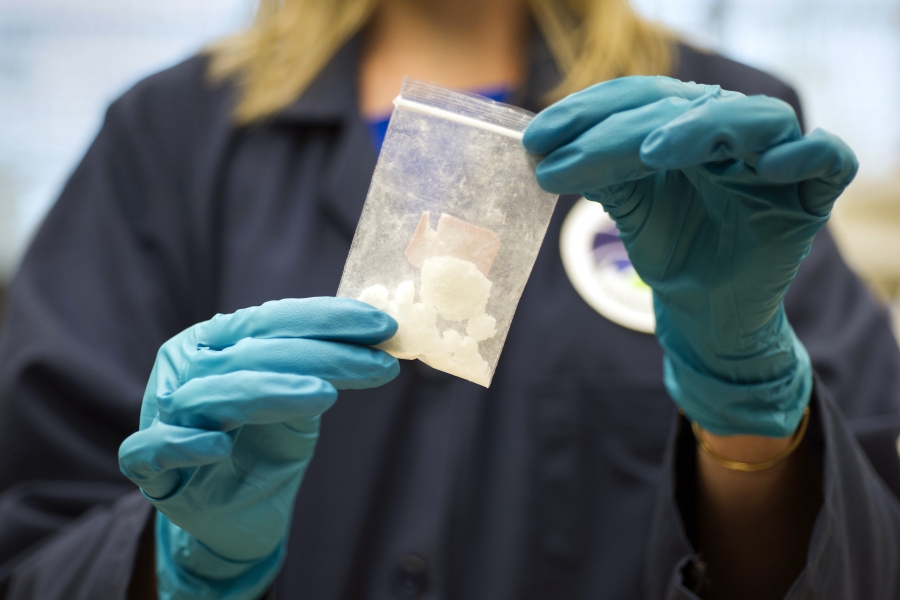 A bag of drugs that was seized in a raid is displayed at the Drug Enforcement Administration Special Testing and Research Laboratory in Sterling, Virginia. The DEA is setting up an office in China to work with Beijing to try to cut off the Chinese supply of deadly synthetic drugs, like fentanyl and carfentanil. China disputes US claims that it's the main source of opioids. Still, Beijing has already banned fentanyl, an opioid some 50 times stronger than heroin.

After 9/11, there were calls for the US Postal Service to look into advance screening techniques, but it's never been fully implemented. Private-sector mail services like FedEx already have electronic screening. Kayyem says this makes for helpful warnings to drug dealers on the so-called darknet. "There are actually statements on the dark web that if you want to get drugs into the United States, do not use the private services. Use the good, old-fashioned United States Postal Service, which when you think about it, our own system should be the least vulnerable," she says.

Kinetz, who's still reporting on the matter, says Beijing is cooperating with the DEA. "It's important to remember that these synthetic opioids are not widely abused within China. Yet in October 2015, China banned 116 of these synthetic drugs that aren't abused in China but are abused in North America." Beijing's new ban on carfentanil, a controlled substance in China, happened after intensive lobbying from the State Department and the DEA.

But if effective electronic mail-screening has to occur before something gets in the mail, that means China has to set up a system of its own. Kayyem says that might happen if the United States gets its own system in place first.  "There are international bodies that control standards of security for the postal system, and if the United States begins to make overtures that it wants the standards raised, that is how you get the international community to move. But without us moving, no one else will."

Which of course brings us to President Donald Trump. His views on China are pretty critical but Kayyem is still hopeful. "Interestingly enough, on the campaign trail, Donald Trump, more so than Hillary Clinton, picked up on this issue, the vulnerabilities of our mail system and actually seemed to approve or applaud it, but this will require a legislative demand by Congress." Kayyem believes that's possible because the opioid crisis is a rare example, where Republicans and Democrats agree that something has to be done.

"This is doable. The technology is not that hard. It's just trying to get enough momentum behind it," she says.