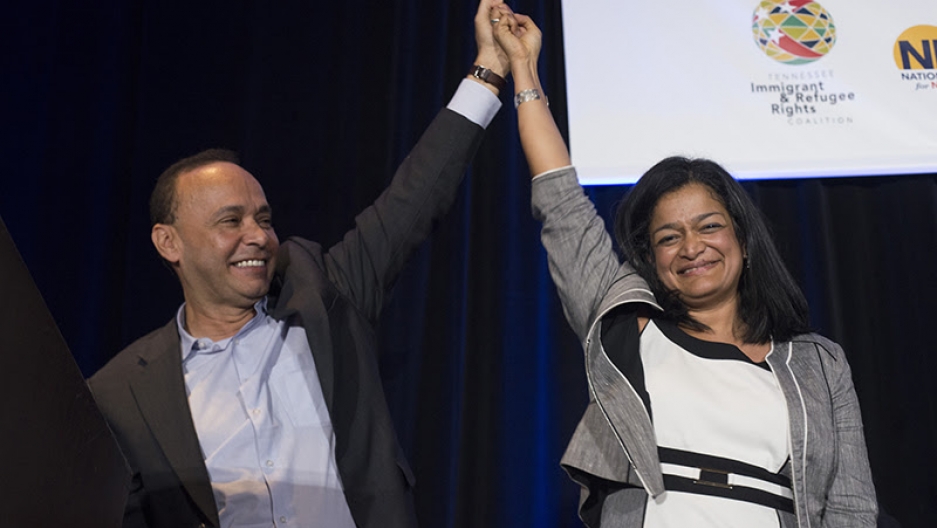 US Congressman Luis Gutierrez of Chicago and US Congresswoman Pramila Jayapal of Washington State get a cheer from the crowd at the 2016 National Immigrant Integration Conference in Nashville.

This Martin Luther King Day, many people are remembering how many setbacks King faced — and how many setbacks African Americans faced — as he struggled for civil rights. King was constantly trying to tell people, though, that the struggle was worth it. That we have to trust in the promise of a future we may not see realized.

So this episode of Otherhood pays respect to the many mundane incremental steps King took to get to his goal, even when it looked unattainable. Sixty years ago this week, MLK was celebrating his birthday after meeting with black ministers from across the South.

It turned out to be a very important moment in history: that was the first meeting of the Southern Christian Leadership Conference, a group that was crucial to the Civil Rights Movement.

Listen to the podcast

This episode of Otherhood is called "What's the backup plan?"

Listen to the full podcast to hear an interview with US Representative Luis Gutierrez of Chicago, who's boycotting Donald Trump's inauguration so he can protest in DC instead.

Rupa also talks to the first Indian American woman to serve in the House of Representatives, Pramila Jayapal, who talks about the responsibility of model minorities to show solidarity.

I've been looking for a new moment like that meeting — a moment when a new movement comes together to protect people who feel threatened by Donald Trump's proposals, possibly including mass deportations, a Muslim registry, and an end to funding for sanctuary cities.

So I went to Nashville, where immigrant leaders from across the US had a chance to talk to each other face to face about what to do.

It was the 2016 National Immigrant Integration Conference, a yearly gathering of lawyers, organizers, funders, advocates and officials from across the US who work on immigration. This was probably their one chance before Trump becomes president to come up with plans to work together.

I met with people like Cristina Jiménez, who’s credited with helping start the so-called Dreamers movement.

“For the first time I feel generally afraid of what could happen,” she told me.

Jiménez founded the youth-led nonprofit United We Dream. She was one of the first students who came out publicly as undocumented and helped achieve deferred action for students. But she doesn’t think those kinds of tactics are going to work any more. Jiménez's nationwide network is asking schools, churches, cities and anyone else they can think of to declare themselves safe spaces for immigrants who may need protection.

I asked her if those spaces will become like a new Underground Railroad, and she said, “I think it could get there.”

That sounds extreme, but many people at the conference were talking in those terms. Azadeh Shahshahani is with Project South, an institute for the elimination of poverty and genocide. She’s a former president of the National Lawyers Guild, and she was born in Tehran, four days after the 1979 revolution. She’s served on international human rights delegations to Haiti, Honduras, Palestine, Tunisia, Egypt and Venezuela.

She said activists shouldn’t plan for courts to protect people.

“We can’t be relying on courts. Trump unfortunately can remake the judiciary,” she said. “I think we really need people’s movements. A lot of what has been achieved in this country, the fight as a whole, is led by people’s movements and lawyers help where they can.”

I was surprised. “You have all these legal skills,” I said, “yet you’re saying we need to rely on movements.”

“Yeah,” she said. “We are the ones who can save ourselves.”

“But,” I asked, “how do you make movements effective?”

“Sustainability,” she responded. “Look at Standing Rock,” she said, referencing the successful months-long sit in Native Americans and their supporters held in North Dakota to protest a pipeline planned near a reservation.

“That was an extreme action they took,” I said. “You’re saying we’re going to get to an extreme.”

“Yeah!” Shahshahani said. “We have to go as far as we can. For us to really survive, we can’t work in silos anymore.”

And that’s an important point. African immigrants in particular feel like other immigrant groups haven’t done enough to show solidarity with African Americans. Kalia Abiade told me a story about how, at the 2014 conference, she and others like Opal Tometi, a Nigerian American who’s one of the founders of Black Lives Matter, took the stage and had everyone say why black lives matter.

“That was the first time I felt emotionally connected to this conference,” said Abiade, who’s with the Pillars Fund, a Chicago-based philanthropic project that supports Muslim nonprofits. “I think we’re just beginning to have the hard conversations about racial justice within the immigrant rights movement.”

So this movement has a long way to go. That’s why younger people are key, says Tara Rhaguveer of the National Partnership for New Americans, which puts the conference on every year.

“This battle that we’re about to go fight, or that we’ve been fighting, is not going to be over in 2018 or 2020. It’s actually going to be a much longer fight than that,” she says. “I really think this is the moment — this should be the moment that mobilizes my generation. I hope it is.”

It’s impossible to know how important a meeting the 2016 National Immigrant Integration Conference was; time will show if the people who met there and the conversations they had were crucial to the development of a new movement, like the first meeting of the Southern Christian Leadership Conference was to the Civil Rights Movement.

What’s undeniable is that many of the people I spoke with will be on the front lines — of whatever happens next.