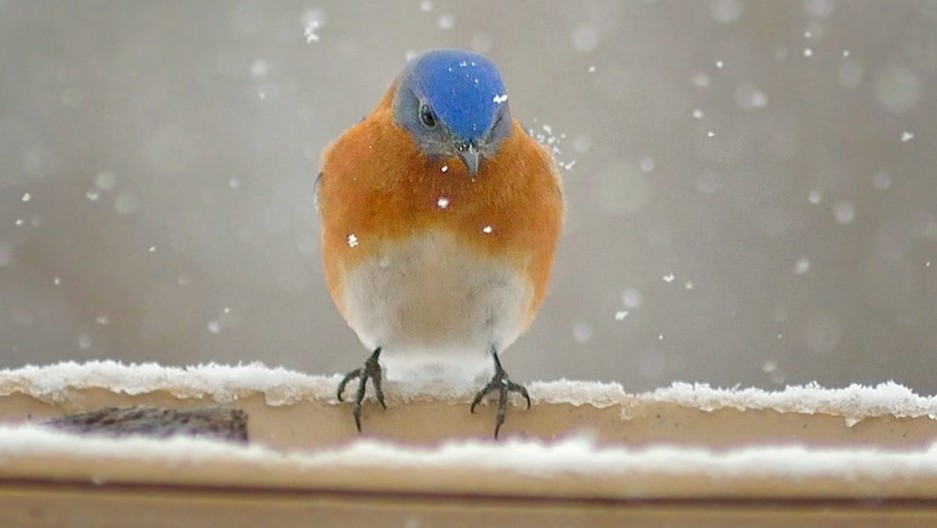 A bluebird braves the cold.

As snow, wind and rain kept many of us cozy inside our homes this December, thousands of bird-watchers grabbed their binoculars and headed out for a day in the elements.

Theirs was no average bird-nerd-devotion: They were on a mission to count every bird they saw or heard, as part of the National Audubon Society's 117th annual Christmas Bird Count.

The count, which begins every Dec. 14 and wraps every Jan. 5, is a census of local bird populations.

Taken at the end of the fall migration, the census provides a snapshot of “how many of which birds are where” — valuable data for scientists studying everything from climate change to the effects of West Nile virus. Results from this year’s tally are still pouring in, but last year, 77,000 birders recorded just under 59 million birds across the United States, Canada, Latin America, the Caribbean and Pacific Islands. The birds they counted represented roughly one-quarter of the world’s known bird species.

“The beauty of the [Christmas Bird Count] is that we really are getting a yardstick on everything that's out there on a continental basis at the same time of year, and we can actually really track what's happening over time with a lot of the species,” says Geoff LeBaron, Audubon's Christmas Bird Count director.

LeBaron explains that the Christmas Bird Count dates all the way back to 1900, when ornithologist Frank Chapman proposed counting birds over the holiday, rather than hunting them. In addition to collecting bird observation data, the count also tracks “effort data,” which helps scientists accurately interpret bird count results.

"So, in a year like this, where potentially, weather is impacting the number of people that are out there and how they can get around, [the count] is still valuable data because we're tracking 'birds per party hour,'" LeBaron says. “We can then sort of measure how much effort was expended to actually count all the birds that are tallied every year.”

While it’s too early to get the big picture on this year’s bird populations, local counts — each covering an area just 15 miles in diameter — have already yielded some surprises. In New York City's Central Park, counters spotted a killdeer, a shorebird that usually doesn’t hang around Manhattan this time of year, says Debra Kriensky, a conservation biologist at the New York City Audubon.

“We actually have a really amazing diversity of birds here in New York City, and even in our really small parks, our pocket parks, we get a lot of birds,” she says.

And LeBaron took part in a counting party in South Kingstown, Rhode Island, which spotted a northern waterthrush for just the third time in that area. Even stranger was the sight of a western tanager, which had never been recorded there before.

“It's a bird that shouldn't be [there] at all, let alone at this season,” he says, adding that the little tanager was a hatch-year bird, and may have headed east instead of south on its first migration. “But also there's been a series of strong storms that have swept right across from the Pacific Northwest over here, and that can also bring birds over. So we'll see how that bird fares.”

One avian species that the Christmas Bird Count has helped scientists learn more about is the bluebird. Decades’ worth of bird count data show that bluebirds have expanded their range northward “quite a bit over the last 50 years,” LeBaron says. It’s a shift that Audubon is digging into further with a new citizen science project.

“We have a new program called Climate Watch which we're testing out right now, and it's actually looking for areas where bluebirds are moving into during the winter in the north, and probably out of in the south,” he says. “So it's trying to track how the birds are responding to climate change.”

In fact, if you missed this year’s Christmas Bird Count, there are opportunities to observe birds for science all year long: Another, newer bird count, the Great Backyard Bird Count, takes place every February, attracting bird-watchers from around the globe. There’s even a program called Hummingbirds at Home: “The goal of that is actually to track what food sources the hummingbirds are using in people's yards,” LeBaron says.

Basically, as Kriensky says of the Christmas Bird Count, “everything counts.” Even the little brown sparrows that flock in droves across New York City.

“I think it's important to count the common birds while they're still common because then you can tell are there changes over time in those populations,” she adds. “And it's still pretty exciting, even if you get a high count of a really common bird. For example, we had in Central Park 1,300 white-throated sparrows. So they’re an abundant bird this time of year, but that's a lot a lot of sparrows, and it was really fun counting them all throughout the park.”

This article is based on an interview that aired on PRI's Science Friday. You can watch this year’s Christmas Bird Count results roll in here.