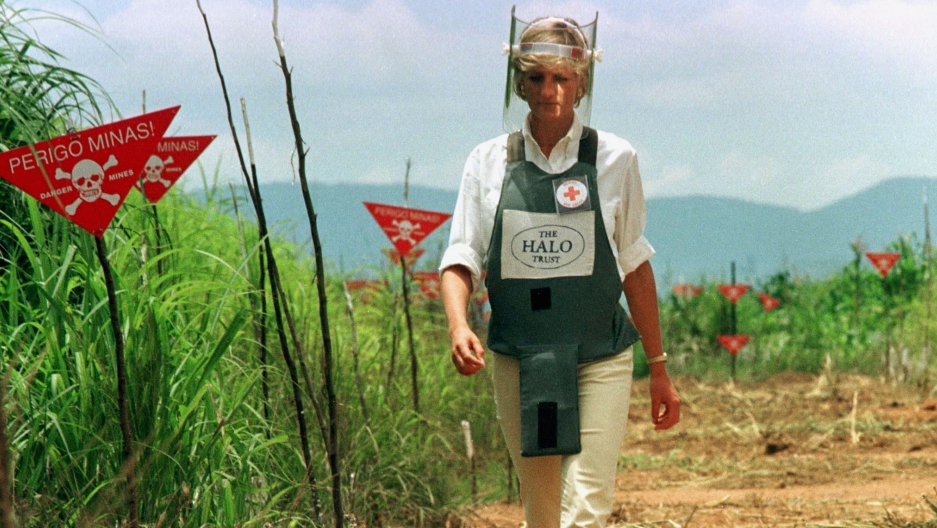 Princess Diana walks through a safety corridor in the minefields of Huambo, Angola, on Jan. 15, 1997.

On Jan. 15, 1997, one of the world's most famous women walked through an active minefield in Angola, and detonated a mine in front of an audience of international reporters, with the help of a land mine removal expert.

"I did not want to be on the front page of the news the next day," that mine removal expert, Paul Heslop, recently told the BBC, "as the man who'd blown up Princess Diana."

Twenty years ago, Heslop had left his job at a London bank for a more adventurous life, traveling to former war zones around the globe to remove unexploded land mines. He was in charge of the demining mission in Angola, which in 1997 was recovering from a brutal civil war, and remembers being nervous about the arrival of his high-profile visitor.

The princess was a benefactor of the nongovernmental organization that Heslop worked for, the Hazardous Areas Life-Support Organization, or HALO. She was coming to see what Heslop's team was doing with her largesse.

"This was going to be an amazing opportunity to showcase the work we did, and how we did it, to the most famous woman in the world," Heslop recalls, "and there was obviously going to be a huge amount of media interest."

After 30 years of civil war, Angola's countryside was still littered with millions of land mines. In a speech at the airport, the princess publicly endorsed a Red Cross campaign for a worldwide ban on mines.

"There couldn't be a more appropriate place to begin this campaign than Angola," Diana told the press gathered for the event, "because this nation has the highest number of amputees per population than anywhere in the world."

Heslop was tasked with guiding Diana through the minefield. He says things did not go well at first.

"She wasn't making eye contact, and I felt that initially she was disinterested," he says. "And then, when the whole mob of journalists came off the other planes I suddenly realized why she was so nervous. And this poor woman was about to go into a live minefield, a dangerous area, in front of however many hundreds of millions or billions of people on the news, and I thought back to the first time I went into a minefield, and I was petrified."

Cameras were rolling. All eyes were on the princess and Heslop, who helped her adjust her safety gear as he explained the protocol.

"Don't be embarrassed about asking questions," Heslop told the princess. "If at any time you have any doubt, if you're in a safe area or unsafe area, just stand still, draw attention to yourself. If you hear an uncontrolled explosion, please just check yourself to make sure you've not been injured, and we'll come back to the control point here."

"And if you find as a result of the blast you've been, you've gone into an uncleared area," Heslop continued, "stay still, and we'll come in and get you out."

And with that, the pair stepped together into an active minefield.

It was all choreographed, of course. The princess was to be shown a dummy land mine. She'd push a button to detonate it, just like Heslop's team did every day.

"As you can see, they've been working away here, and they've uncovered a mine," Heslop told her. "What we're going to do now, is, place a charge here, and you will detonate a mine. Just press a button, and there will be a bang, and you will have got rid of one of these things."

"One down, 17 million to go," Diana said, and pushed the button.

Recalling the day two decades later, Heslop takes a certain pride in how well it all went.

"When we were taking her through the minefield, her security were very concerned about how we would manage it," he says, "and I said to them, 'You know, this is probably the one time in the trip that you don't have to worry. Because we care more about something happening to her even than you do.' And as they were leaving to get on the plane, the head of security came over and shook my hand, and he said, 'That's been the easiest two hours of our trip, thanks very much.'"

The press event drew lots of attention worldwide — not least in the UK where, in 1997, the British army still kept land mines in its arsenal. A British reporter in Angola asked Diana for a comment.

"Ma'am, a government minister at home has said you're a loose cannon by supporting this campaign," she told Diana. "Do you have any reaction to that?"

"We're here only trying to highlight a problem that's going on all around the world," the princess responded. "That's all."

A few months later, Diana would die in a car crash in Paris.

The UK ratified the international convention banning land mines the following year. Today, 80 percent of the world's countries have signed on to the treaty.

"Unfortunately, 20 years on, we're a long way to solving the problem but we haven't completely solved it yet," says Heslop, who still works on land mines, now for the United Nations. "And I think that would be the downside of Diana's legacy, is that people feel that the mine problem has now been solved, and actually it hasn't. There's still a way to go."

Among the countries yet to ratify the international ban on land mines are China, Russia and the United States.

Paul Heslop told his story to the BBC's Farhana Haider.