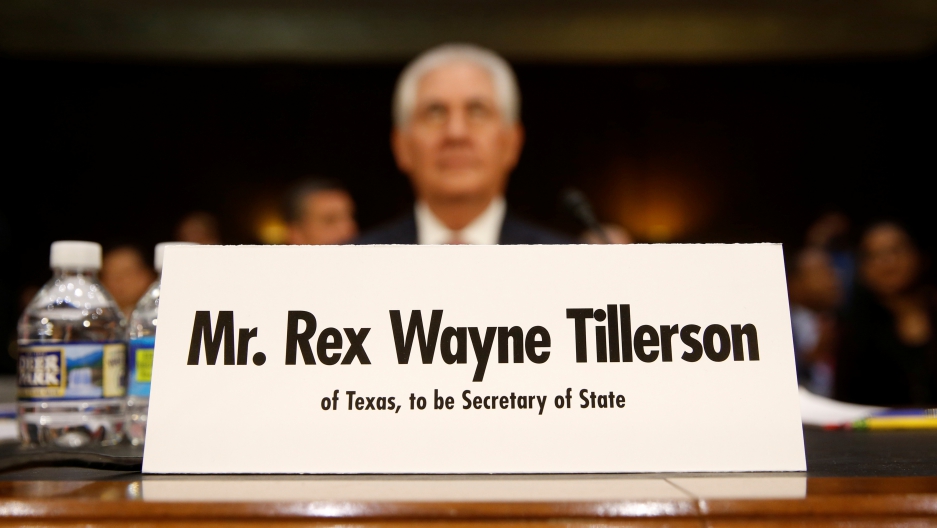 Rex Tillerson, the former chairman and chief executive officer of ExxonMobil, testifies before a Senate Foreign Relations Committee confirmation hearing on his nomination to be U.S. secretary of state in Washington, U.S. January 11, 2017.

Rex Tillerson told the Senate panel considering his nomination for secretary of state that he supported the United States remaining in the Paris climate agreement and that he has made his views known to Donald Trump.

The position, repeated several times during a day-long hearing of the Senate Foreign Relations Committee, puts him at odds with the president-elect's campaign vow to "cancel" the landmark global accord.

But Tillerson acknowledged that this advice would have to be squared with Trump's own promises to put "America first" in the new administration's energy policy, which heavily favors the unrestricted use of fossil fuels.

"We're better served by being at that table than leaving the table," Tillerson said in response to a question from Democratic Sen. Tom Udall of New Mexico, noting that more than 190 countries had come together to tackle climate change.

Tillerson, chairman and chief executive of Exxon Mobil until two weeks ago, did not mention the accord or climate change in his nine-page prepared introductory remarks. But again and again in his wide-ranging testimony, he was pressed by Democrats to articulate his views on the climate crisis, because as secretary of state he would have to lead the country's climate diplomacy.

Though Tillerson cautiously backed the Paris agreement, mainly to ensure other countries are doing their fair share of climate action, on other climate change issues he was more doubtful. He pushed back against the growing scientific evidence that links global warming to severe weather events, habitat loss and spread of certain diseases. He also declined to answer questions about Exxon's ambitious in-house climate research in the 1970s and why it pivoted to funding climate denial campaigns afterward, telling senators to ask the company.

By Neela Banerjee, John H. Cushman Jr. and Marianne Lavelle for Inside Climate News. To read the rest of their article, click here.