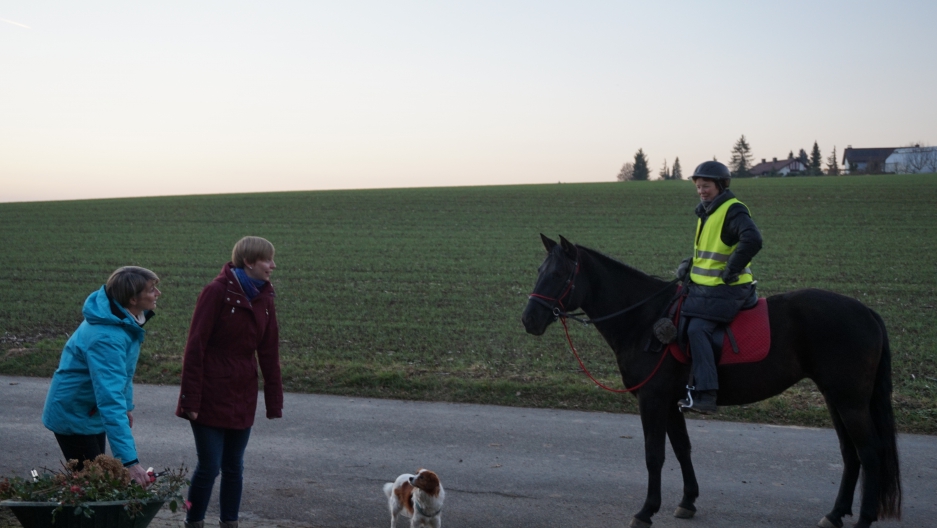 Across Europe, countries are grappling with how to best accommodate the surge of migrants. That includes Switzerland, population 8.5 million. The country grants asylum to a few thousand refugees each year and tries to resettle them evenly across the country. But not every community welcomes those refugees.

In Oberwil-Lieli, a small, wealthy town, the immigration battle recently came to a head.

Oberwil-Lieli is right outside Zurich, Switzerland’s biggest city. It feels like a different world here — there are rolling hills, and people drop by each others' houses on horseback.

Graduate student Johanna Gü​ndel, 25, loved growing up in a town where her family has lived for generations.

But last year, a university roommate of hers posted a video to Facebook of a mayor boasting to a reporter that his town was safe and idyllic — and that it was going to stay that way because no refugees were there. It turns out that under his leadership the town had opted to pay a $300,000 fine rather than accept its federal quota of eight refugees.

This was the first Gü​ndel had heard of this. She was incensed — and she wasn’t alone. Others in her town of slightly more than 2,000 people were shocked.

“That was the time when we kind of woke up and realized, is that what was going on all those years?” she said.

It was. All those years there weren’t refugees there, it was because the town had been paying the fine to their canton, similar to a state. The fine had been put in place in case a community couldn’t accommodate the refugees they were mandated to take in — the Swiss government has each town take refugees based on how many adults live in a community. Recently, the size of the fine has been increased tenfold. And the mayor, Andreas Glarner, was boasting about it because he was running for a seat in Swiss Parliament.

“Just the fact how he talked about we here in Oberwil-Lieli do this and want this and I did not feel like I in any way belonged to that we,” said Gü​ndel.

Gü​ndel organized protests and introduced a vote on the issue at a town meeting. The residents voted to allow refugees in. Then someone filed a referendum and there was a mail-in vote — and this time, the town voted the other way, to NOT allow refugees in. Both elections were tight, nearly 50-50.

Meanwhile, the mayor kept campaigning, calling migrants terrorists and warning they’d take jobs and resources. News footage shows him gleefully standing in front of housing where refugee Bosnian families had once lived, as they were demolished. 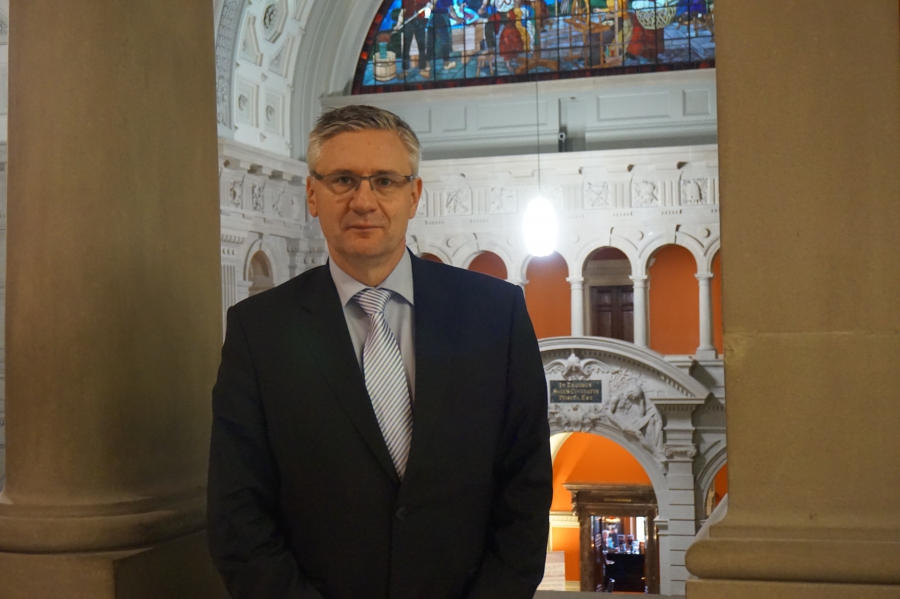 Andreas Glarner is mayor of the town of Oberwil-Lieli and a member of the Swiss parliament.

Glarner says he had them torn down because they were for refugees. He says this while in the Parliament building in Bern, Switzerland’s capital. He earned a seat here after campaigning on his anti-migrant rhetoric.

“We cannot take the whole world into Switzerland. That’s really a big problem. There’s a mass migration to Europe and we should stop it,” he said.

He proudly shows off his seat on the Parliament floor and walks me around the building as he talks about the importance of maintaining what he thinks of as Swiss identity.

“It’s very Swiss to keep our own country as we like to have it. We are not in the European community. And we are free in our decisions and we should make what is good for Switzerland,” he said.

Back in Oberwil-Lieli, even individual families are divided as to whether the town should welcome refugees. Gü​ndel says it’s been hard.

“My town changed for me. It was difficult to walk the dog on the streets because some people wouldn’t greet me anymore,” she said. “Every time you meet someone you think is this person for me or against me. And it takes a lot of strength, a lot of energy, and I did not feel quite as at home and at ease anymore as I used to.”

At the local grocery store, resident Marc Bierty is picking up a few things. He says he voted to allow migrants in, but his involvement stopped there.

“I don’t have the time for that because I’m employed, I have two kids, I have to provide for them and I have a lot of things on my mind despite that,” he said.

He says as divisive as this question was, most people are just concerned with living their lives.

“They didn’t have an opposition or on the other side they didn’t have maybe a pro side — so it was really Swiss like — we’re in the middle,” he said with a laugh.

As for Glarner? The mayor and member of Parliament visited migrant camps in Greece a few months ago. He’s still keeping up his populist right-wing rhetoric, but the trip softened his views enough that he’s now leading a move to allow a single refugee family to move to town.

It won’t be anytime soon though — he can’t find a landlord with space to rent.