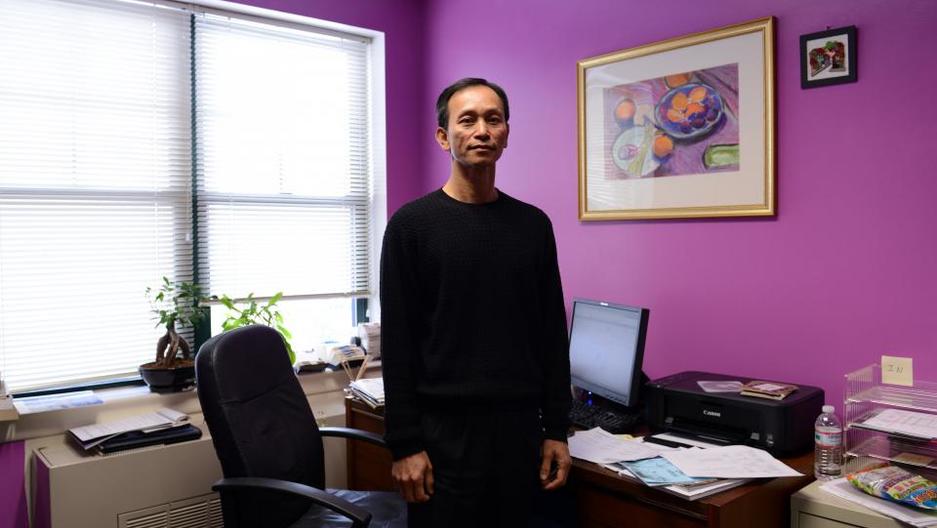 Nam Pham, former director of VietAID in Dorchester, at his former office in Dorchester's Fields Corner. He never encountered the younger Wahlberg, but he encountered racism in the neighborhood frequently.

The list of actor Mark Wahlberg’s offenses is not inconsequential. At 16, during an attempted robbery, he pummeled a Vietnamese man with a wooden stick and knocked him unconscious. Later the same day in 1988, he punched another immigrant from Vietnam and allegedly peppered him with a racially derogatory term directed at Asians.

“Gook — just like the N-word. But the G-word is for us,” said Nam Pham, a leader in Dorchester’s 8,000-strong Vietnamese community, who is all too familiar with the term. He never encountered Wahlberg, but he encountered the term frequently.

“I first came to Dorchester’s Field’s Corner in 1981, and once in a while I would run into people who would tell to my face, ‘Go home gook,’" Pham said. "It was very common.”

This is why Wahlberg’s on-screen portrayal of a Boston cop is filled with irony given the crimes he committed as a young man, including several assaults on people of color. The movie "Patriot's Day" will be released to general audiences nationwide Friday. It details the immediate aftermath of the 2013 Boston Marathon bombings where police Sgt. Tommy Saunders, played by Wahlberg, is in a frantic race against the clock to hunt down the Tsarnaev brothers. 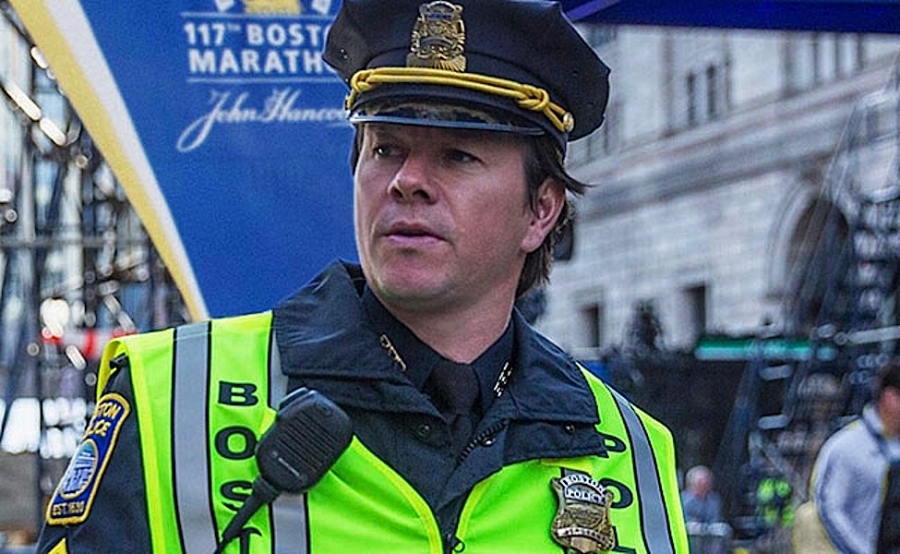 Mark Wahlberg as Sgt. Tommy Saunders in “Patriot’s Day.” The film is about the 2013 Boston Marathon bombings and has nationwide release on Friday, January 13.

Before stardom, Wahlberg was something else: a juvenile delinquent, making life hell for Vietnamese immigrants and African Americans on Boston’s racially divided streets.

Wahlberg was convicted of assault and served a little more than a month in detention for attacks on the Vietnamese men. The A-list actor was, until recently, trying to win an official pardon for his crimes. Both former Governor Deval Patrick and current Governor Charlie Baker were disinclined to act on his request for a pardon, so in September Wahlberg dropped it. Baker met with Wahlberg in early 2016 to discuss his upcoming movie. But in a recent interview, the governor still appeared unsympathetic to the notion of a pardon, despite Wahlberg’s work on "Patriot’s Day".

"I give Peter Berg [the director] and Wahlberg and the rest of them a lot of credit for what I believe capturing the story in the right way," said Baker.

The road to a pardon in Massachusetts would go through the Governor’s Council and at least one member, Mike Albano, was ready to grant it. He says Wahlberg’s fame made his case more difficult.

"The interesting part about this one is, if his name was Mark Smith, this would not be controversial at all," Albano said. "He was a youthful offender. He served his time. If you look at his record, the contributions he's made back to the community with veterans and young people, he’s a perfect fit for a pardon.”

Though the pardon is now moot, Wahlberg remains self-conscious about his past and told me during a recent press conference for "Patriot’s Day" that he is trying to make up for it through charitable work with the Boys and Girls Clubs and through his own life example.

"Considering where I came from and coming up in an area like this is not an easy thing to do, but that’s why I want to focus so much on giving back and make sure I can create opportunity for kids growing up in Dorchester, Roxbury, inner city average youth, and tell them that if I can accomplish what I set out to do through hard work and dedication, they can do the same," Wahlberg said.

Wahlberg grew up in a tough, white working class part of Dorchester. Physical attacks on immigrants and African Americans were not uncommon in the post-anti-school busing era. Busing for the purpose of desegregating schools began in 1974, but its effect lasted into the 1990s. When it began, white residents of Boston’s notoriously insular neighborhoods tried to torpedo a judge's desegregation order by pelting yellow buses carrying black kids with rocks. The conflict spilled over to local beaches, night clubs and street corners. Latinos, Asians and newly arrived Cape Verdeans were also among those targeted.

Both Wahlberg and his victims are dealing with the lingering impact. One victim, Kristyn Atwood of Decatur, Georgia, a black woman who was ten at the time, told the Associated Press in 2015 that she will never forgive him.

"I don't really care who he is. It doesn't make him any exception," she said. "If you're a racist, you're always going to be a racist."

Another victim, Johnny Trinh (Hoa Trinh), a Vietnamese man now living in Texas, told a Daily Mail reporter he does forgive Wahlberg, and denies a popularly held belief that the permanent injury to his left eye was caused by the actor during the 1988 assault.

Pham, the Vietnamese American leader who now works for the Baker administration, suggests a novel way he thinks that Wahlberg can atone for his past.

“He’s a big movie star. We all believe in a second chance," said Pham. "Perhaps he can make a movie talking about race.”

“A man from Dorchester who was a troublemaker and now trying to make things better for everybody. A movie that would embrace the concept of brotherhood, of living together, making our neighborhood a much better place. I think that would be a wonderful thing to do.”

When I mentioned this proposal to Wahlberg, he actually seemed open to the suggestion. "Well, I'll have to figure out who’s going to play me in the movie first. That would be the toughest task," he said.

"Yeah, growing up in Boston during the 70s and 80s there was a huge racial divide. It was pretty much all we knew growing up and one of the things I continue to go back to is to see how far cities come, how much people have grown and how people from all walks of life,” Wahlberg said. “And as far as telling my own story, these are things that I’ve worked hard [to achieve] every day. To become a better person, a better father, a better husband and a better Bostonian. So, the last act of my story is yet to be written but I am very proud to be a Bostonian, to be a part of this story."

Hollywood has never made a full-length movie about the collective trauma of racism and anti-busing that enveloped Boston in the 1970s and 80s. In the meantime, Wahlberg hopes that "Patriot’s Day" will serve as one kind of movie about reconciliation.

The film, he said, is about "how people from all walks of life ran towards the problem and went to help people because it was the right thing to do."