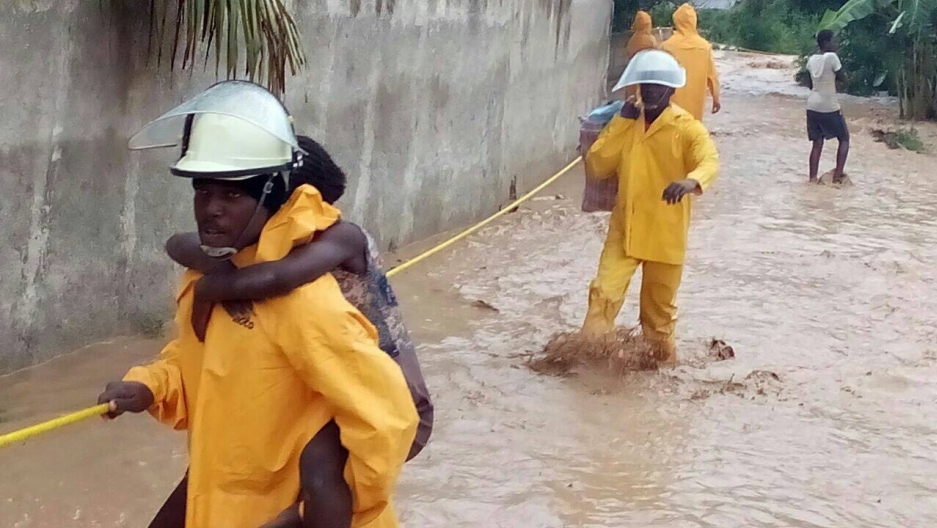 This snapshot shows the government response to Hurricane Matthew, amidst the evacuation, in Haiti.

It was seven years ago today, at 4:53 p.m., that Haiti was violently shaken. In just 35 seconds, the 7.0 earthquake destroyed much of the nation’s capital, Port-au-Prince, and claimed more than 200,000 lives.

Just over three months ago, on Oct. 4, Hurricane Matthew dealt another devastating blow to the country. The Category 4 storm’s 145-mph winds tore through Haiti’s southern peninsula, washing away farmland — one of the island nation's “breadbaskets” — along with vast swaths of homes and trees, and killing hundreds of people.

The two disasters were completely different — one urban, the other, rural; one arriving without warning, the other, visible in the distance — but both amounted to enormous humanitarian crises that called for immediate, aggressive action, locally, and across the globe.

As I drove around the disaster zone in the days after Hurricane Matthew, speaking with aid workers and others on hand, I was struck by what I heard over and over again: “We have learned from the mistakes of the earthquake response.”

So, as horrible as the hurricane was, Haiti has been able to apply some of those lessons — and more recently, it has led to a much-improved disaster response. It starts with the government.

Lesson 1: The government must be in charge

In the earthquake, Haiti lost its National Palace and main government buildings, and many civil servants lost their homes and loved ones, if not their own lives. Still, the government's near absence in the midst of the crisis was surprising. It took days for the president to address the nation, and when aid workers and money flooded in, they largely bypassed the government.

The UN set up coordinating meetings, but they were usually in English; the number of responders was overwhelming, but no one entity was leading the charge. There was a lack of quality control, and there were redundancies and gaps in aid, and many Americans wondered where their money had gone — either the tax dollars slated for earthquake response, or, the nearly half a billion dollars that went to the American Red Cross.

In the aftermath of the hurricane, however, aid workers tell me the big, positive difference, is that this time, the government is in charge. That’s not just because it's better equipped now, but it's also being more intentional about asserting control. This was clear in the statement issued by the Haitian Embassy in Washington the day after the storm; it expressed that the government was responding to the disaster and that anyone who wanted to help should work with local institutions.

The mayor of the hard-hit town of Port Salut, Wilson Denard, says he’s been working with multiple government ministries, as well as nongovernmental organizations, on various aspects of humanitarian relief and reconstruction.

Still, most NGO workers I’ve heard from say they want to see more government control, but the nation's poverty is extremely limiting. The more than $9 billion in aid that went to Haiti in the two years after the earthquake was almost three times the Haitian government’s revenue during that period, and only about 6 percent of that aid went to the Haitian government, and even less to other Haitian organizations.

The consensus in the aid world is clear: International NGOs need to cooperate more with each other, with local organizations and with the government.

A major problem after the earthquake was how little this was happening: Some NGOs insisted on going it alone, even waging turf wars when partnering up would have better served those in need.

That's something that NGOs seem to have taken to heart. When I asked aid workers for success stories in the hurricane response, they brought up a number of partnerships. Including:

•    Dr. Louise Ivers of Partners in Health said the most interesting news in the hurricane response was a cholera vaccination campaign that was made possible by support from the UN and NGOs but “very much led by the Haitian government.”

•    Heifer International donated food, seeds and seedlings to thousands of farmers who had lost everything. They accomplished this by tapping into their partner farmers associations and rural women’s cooperative located in unaffected parts of the country.

•    Gaskov Clergé Foundation, a group founded by natives of the hard-hit city of Les Cayes, signed a "memorandum of understanding" with the city’s mayor after the storm. Under the plan, the city agreed to provide transportation and security for the foundation. In turn, the foundation would supply emergency aid and help rebuild schools and wells. In the end, the group also raised funds to buy two dump trucks for the city.

•    After the earthquake, CARE Country Director Jean-Michel Vigreux says donors, including USAID (United States Agency for International Development), asked CARE and other NGOs to collaborate to set up a cash transfer program. He says donors should do that more — encouraging NGOs to join forces with others.

In 2013, CARE partnered with public and private entities to develop a social safety net program. Vigreux just wishes it had happened earlier: “What is really sad,” he says, “is that between 2010 and 2012 there was so much money available that could have been better used, with expanded cooperation between actors.”

•    Oxfam’s Marie Rivette says she now sees more international-domestic partnerships. By contrast, in the aftermath of the earthquake, outside organizations rushed in and tried to do everything themselves.

When the hurricane hit, local groups got more involved. “What we have to do on the level of international NGOs is support them technically and give them money,” she says.

Although great strides have been made here, not everyone has learned to cooperate — yet.

Angel Aloma, executive director of Food for the Poor, tells me NGOs are less likely than governments to change because of their different cultures and reluctance to work together. Aid veterans agree that turf wars continue.

The fact that the world didn’t rush in after the hurricane, as it did post-earthquake, has been positive in one way: It’s allowed for more local control and easier coordination of the response. The downside, though, is that money is tight in the impoverished country — and urgent needs persist.

In November 2016, the UN appealed to its members for $139 million, to go to relief efforts in Haiti, but by the year’s end, it was only 62 percent of the way there.

So, as Haitian authorities apply the lesson of taking charge as best they can, would-be donors might still need to learn how to give them the means to do so.