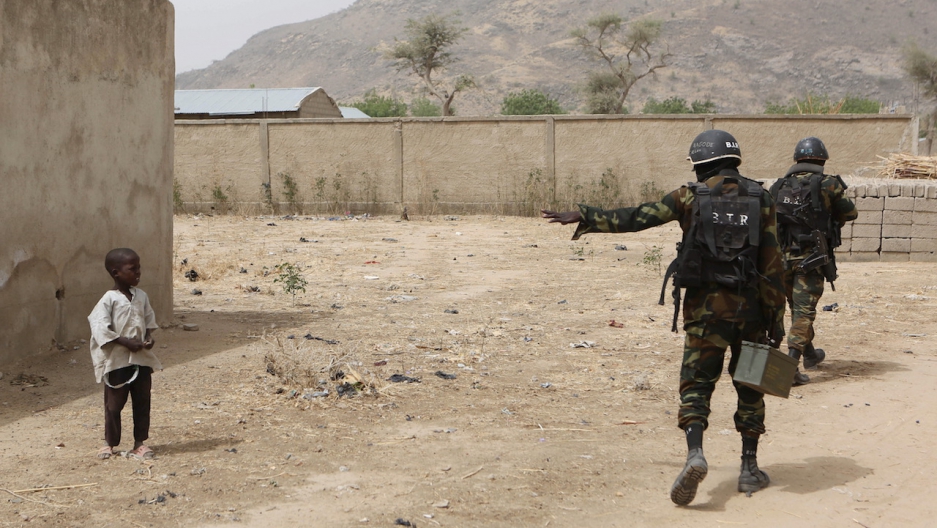 Cameroonian soldiers from the Rapid Intervention Brigade tell a young boy to stay back while on patrol in Kerawa, Cameroon, March 16, 2016.

In the war on terror, guns and bombs just haven’t been enough. So Cameroon is trying spells and curses too.

About a year ago, Cameroonian President Paul Biya urged citizens to use witchcraft against Boko Haram, the Islamic State-affiliated militants who have terrorized West Africa for years.

“We expect every village to have brilliant actions in this direction,” said Midjiyawa Bakari, governor of the Far North region of the country, echoing the president. “We want to hear that this or that village has wiped out or limited the sect's damage through witchcraft. Fight for your country.”

Many viewed the move as a sign of Biya’s desperation as the jihadists continue their rampage of suicide attacks, pillaging and kidnapping throughout Cameroon, as well as in Chad and Nigeria. The three countries have made headway against the group — some commercial routes between Cameroon and Nigeria that had been closed due to the violence have reopened, and some of the people displaced from villages near the Nigerian border have been able to return home. But there is much more left to do.

And locals in Mora, a remote mountainous district in the Far North province near Nigeria, said they would try anything to end the Islamic State’s reign of terror.

After Biya’s call to employ witchcraft against Boko Haram in January 2016, hundreds of militia fighters rushed to sorcerers, commonly called “marabouts,” to obtain lucky charms and talismans to protect them in battle.

"Since I have this gris-gris, I have no problem,” said Mohamad Ahmed, a gym teacher and member of a local militia in Mora, referring to a small cloth bag typically worn around the neck or wrist.

Filled with supposedly magic objects and paper inscribed with verses from the Koran, Bible or other holy scriptures, gris-gris originated in Africa but are common among voodoo practitioners in the Caribbean as well. Women often don them for contraception.

“It is so powerful,” said Ahmed. “I put it on at the moment I go into the field of fighting. The fetish protects its wearer. If someone shoots at you, the bullets have no effect. They fall on the ground like small pebbles.”

Ahmed noted that he has not been shot to test the charm, however.

In the past two years, more than 1,500 Cameroonians have died in the war against Boko Haram, while the violence has displaced 155,000 people, according to the government.

"One morning the terrorists entered our house,” said a 32-year-old woman who fled Kérawa, a village on the Nigerian border, with her 9-month-old baby.

The woman, now in Mora, was a farmer in Kérawa. She declined to provide her name out of fear of retribution from Boko Haram militants. “They murdered my husband before our eyes,” she said. “Then they raped my neighbor before setting fire to the whole village. Soldiers on patrol saved us." 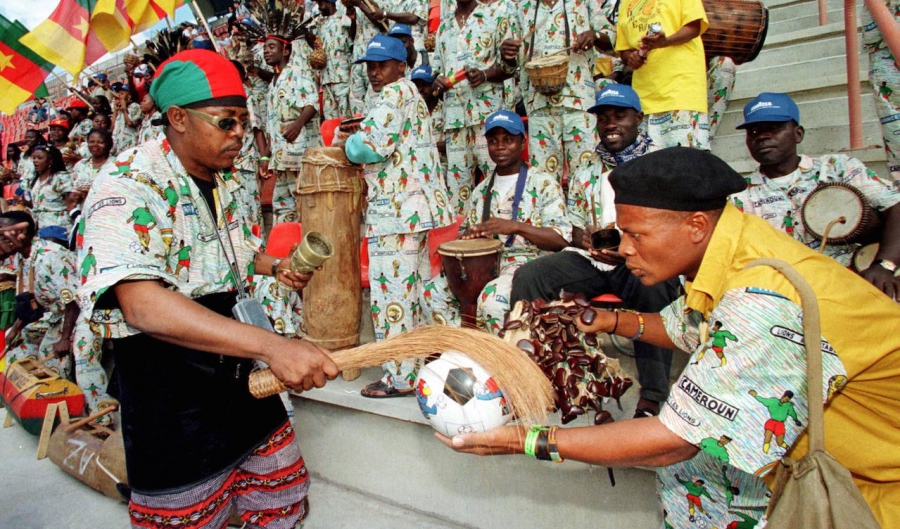 This 1998 file photo shows a witch doctor from Cameroon casting a spell on a soccer ball prior to a national team practice session.

Ironically, witchcraft is illegal in Cameroon due to its perceived pernicious effects in tribal communities, where believers frequently cast spells in hopes of hurting their enemies. The law imposes fines and prison sentences of as long as 10 years on those convicted of black magic.

However, "it is well known that occult ceremonies are practiced in the political circles of Cameroon at a very high level,” said Henriette Ekwe, a Cameroonian political analyst and good government advocate.

She maintains that the call for occult help isn’t a good sign.

“When one comes to advocate the practice of witchcraft, it is because one is not sure of one's army,” she said. “It is not up to a head of state to advocate practices of black magic in a theater of operations where it is the weapons that must inflict defeat on Boko Haram, not magicians or sorcerers. This is very serious for the morale of the troops."

“What is surprising,” she went on, “is that the head of state advocates the practice of witchcraft prohibited in Cameroon. How many times have we thrown old people into cells on the grounds that they are accused of practicing black magic in the villages?”

Baba Boukar, a marabout, claimed that he had studied witchcraft for years and could invoke curses and cure the sick. Against Boko Haram, he said his disciples could choose between magic trinkets like Ahmed’s, or vampirism.

To locals, there are two types of witchcraft: fetishism, which employs charms to harm or do good, and vampirism, in which incantations replace the physical objects.

"Some members of the vigilance committees now have the ability to mystically eat the hearts of enemies or make them slaves by pronouncing incantations," said Boukar. These would be spiritual, not literal, accomplishments.

Another militia fighter, a 30-year-old who gave his name only as Delli, said he possessed an amulet that allowed him to turn invisible and sneak up on Boko Haram terrorists in Kérawa.

"I was recently alerted that two women were in possession of a bomb. I wanted to surprise them,” he explained. "I pronounced the magic phrases and I appeared before them. The bomb was defused."

Still, officials don’t know if the wizardry has been working or not.

"We pass the information of the higher-ups to the populations concerned,” said Toudje Goumo, a deputy prefect of the Mayo-Sava area in Cameroon’s Far North region. “Regarding witchcraft, we don’t have the resources to assess the level of its impact on the ground.”

But locals believe. In fact, faith in the supernatural is so strong among Cameroonians that some said they feared militia members might use magic to commit crimes or exact revenge for grievances against their neighbors.

“I am concerned about the consequences,” said Ngue Bong Simon Pierre, a lawyer in Douala. “Isn't it possible that those responsible for performing these rites might also abuse them?"