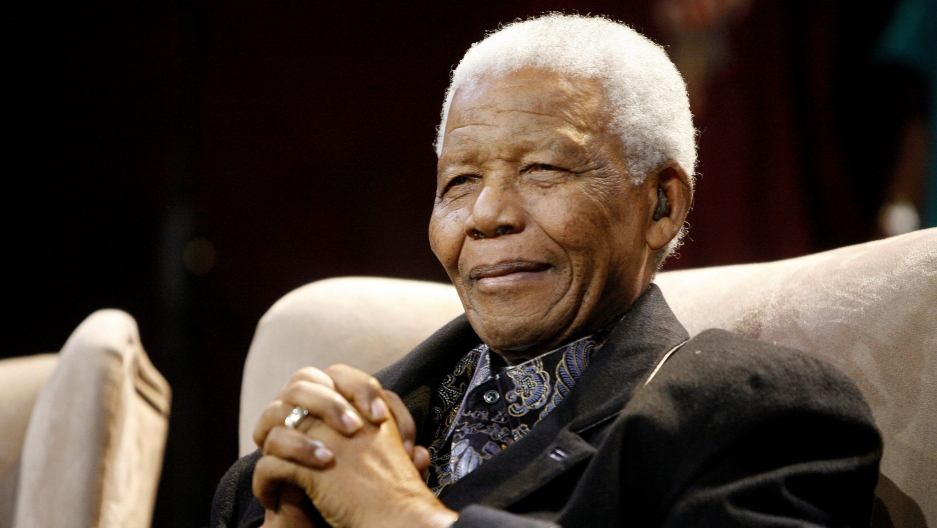 Despite the overwhelming YouTube evidence, however, many folks still swear they remember Darth Vader’s breathy “Luke.” There’s a name for this phenomenon, when many people misremember the same thing, in the same way: It’s called the Mandela Effect. Apparently, when Nelson Mandela died in 2013, some people thought they already had memories of him dying in prison, in the 1980s — before he became South Africa’s president.

“I thought I remembered it clearly, complete with news clips of his funeral, the mourning in South Africa, some rioting in cities and the heartfelt speech by his widow,” writes the paranormal researcher Fiona Broome on her website about the Mandela Effect. “Then, I found out he was still alive.”

For some Mandela Effect enthusiasts, the phenomenon fuels theories about alternate realities. “I think [that]'s a really cool idea,” says Harvard neuroscientist Steve Ramirez. “But until it becomes a kind of trackable, testable, hypothesis, it's … very good science fiction.”

But Ramirez has extensively studied how memories — real and false ones — are formed in our brain. And he explains that along with our memory of an event, we store information about how the event made us feel — even the sights, sounds and smells associated with that memory. Pulling all those relevant bits of information together, Ramirez explains, is an area of our brain known as the "hippocampus."

What’s more, our memory apparatus isn’t perfect: It can’t create objective records of the past. “When you recall a memory, for example, it’s not a tape record[ing], or it’s not an iPhone video of the past,” Ramirez says. “It's actually a reconstructive process, in that the memories that are most real are probably the ones that we don't recall.”

He explains that’s because the second we recall a memory, our brain immediately begins the process of modifying it with bits and pieces of new information. Our resulting recollection is, by nature, impure: “Every memory is a kind of almost mild false memory,” he adds.

And in his research, Ramirez has examined just how memories can be manipulated with new information. In one study, his team created false memories in mice.

“We managed to find the cells in the hippocampus that were involved in processing the memory of a safe environment,” he explains. “In this case, we were working in rodents because we have exquisite access to their cognitive machinery. So we were able to find the cells, in this case, that processed the memory of a safe box that [the mouse] was put in.”

“And then what we did was we were able to artificially turn that memory on while the animal received just some mild aversive stimuli,” he explains. “It doesn't hurt the animal by any means … it's just a surprise. When we placed [the mouse] back in the originally safe environment, the animal actually showed some kind of fear responses to that environment.”

Ramirez isn’t sure what exactly is behind some people’s false memories of Mandela’s 1980s demise. “I don't know what our bandwidth for memory is, but … for some reason, our brain fills in these gaps in these stories,” he offers. “Maybe it's an attention span thing, where when we're learning about Mandela we remember, ‘Oh wow, he was in jail for that long?’ And then the rest of it, you just kind of skim over the Wikipedia page, and it doesn't stick.”

In other popular examples of the Mandela Effect, however, Ramirez sees something called “confirmation bias” at work. For example, many people claim to remember the popular "Berenstain Bears" children’s books actually being spelled "Berenstein." For others, it’s a memory of the famous Queen song, “We Are The Champions,” ending with the phrase “we are the champions of the world.” (That line only comes up in the song's "bridge" — a pause.)

“Sometimes when you have multiple people with imperfect memories confirm each other's bias about that particular memory, then it's more likely to kind of snowball,” he says, “and then you get a little pocket of people that believe A happened, when, in fact, B happened.”

Ramirez adds that this type of confirmation bias can be exacerbated by technology and the media, which give us easy access to “each other’s opinions that confirm our own, and each other’s versions of our histories that also confirm our own.”

“And then in some instances, like a meme, it reaches escape velocity and then takes on a life of its own,” he says.