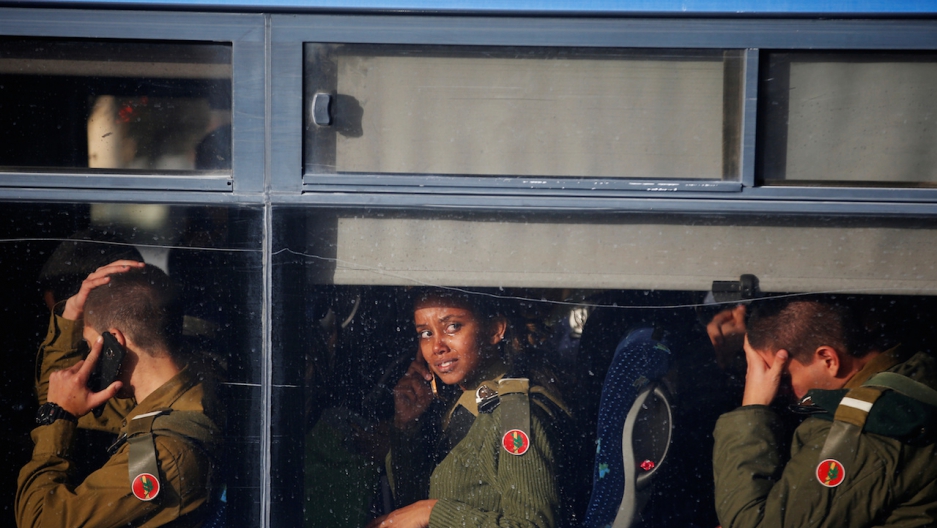 Israeli soldiers leave the scene of a truck-ramming incident in Jerusalem, Jan. 8, 2017.

A Palestinian attacker rammed a truck into a group of Israeli soldiers visiting a popular tourist spot in Jerusalem on Sunday, killing four and wounding at least 15 people, authorities said.

The driver was also killed at the location, overlooking holy sites in the Old City such as the Dome of the Rock and providing one of the most spectacular views of Jerusalem.

Israeli Prime Minister Benjamin Netanyahu alleged the attacker "supported" the Islamic State group, though he provided no details on what led to the finding.

Chaos broke out at the scene when the truck plouwed through the crowd, with hundreds of soldiers having arrived there as part of a tour for troops about the history of Jerusalem.

"A lone terrorist drove his truck into a group of soldiers standing on the side of the road," police spokesman Micky Rosenfeld told reporters at the scene.

"They got off the bus, and as they were getting off the bus and getting organized, he took advantage."

Israel's military said one of its soldiers fired on the attacker and distributed video of him saying he shot after realising it was not an accident.

Multiple bullet holes could be seen in the windshield of the truck.

Police only confirmed four people were dead, but a medic at the scene said they were soldiers.

Medics also reported that three of the victims were women, while all four were in their 20s.

Video said to be of the incident being shared online shows a flatbed truck with a crane in the rear drive through a group of soldiers standing next to a bus.

The driver then pulls off to the side and tries to reverse back toward where the soldiers were hit before the truck eventually comes to a stop.

Ambulances rushed to the location and video showed visitors, including soldiers, running for cover as the incident began. Bodies were later covered in sheets.

"I heard my soldiers screaming and shouting," said one of the tour guides, Lea Schreiber.

"I saw a truck that went on the side of the road. Soldiers starting shooting. ... There were orders and screaming everywhere. They told them to hide behind the wall because there was fear of another attack."

"We know the identity of the assailant, who according to all indications supported IS," Netanyahu said, according to a statement from his office.

Fawzi Barhum, a spokesman for Islamist movement Hamas, which runs the Gaza Strip, saluted the attack, calling it "heroic and brave."

Palestinian security officials in the West Bank city of Ramallah said the driver was a Palestinian in his late 20s from the east Jerusalem neighborhood of Jabal Mukaber, located close to the scene.

Rosenfeld said it was not yet clear if the attack had been planned earlier or was spontaneous.

It occurred in what was formerly designated a no-man's land between mainly Palestinian east and Israeli-dominated west Jerusalem, near UN headquarters at a spot that leads to a promenade with picturesque views.

Israeli settlements in east Jerusalem and Palestinian neighborhoods are located nearby.

The UN envoy for the Middle East peace process, Nickolay Mladenov, condemned the attack in a statement.

"It is reprehensible that some choose to glorify such acts which undermine the possibility of a peaceful future for both Palestinians and Israelis," he said.

"There is nothing heroic in such actions."

A wave of Palestinian knife, gun and car-ramming attacks broke out in October 2015, but the violence had greatly subsided in recent months.

Since October 2015, 247 Palestinians, 40 Israelis, two Americans, a Jordanian, an Eritrean and a Sudanese have been killed, according to an AFP count.

Most of the Palestinians killed were carrying out attacks, according to Israeli authorities.

Others were shot dead during protests or clashes, while some died in Israeli airstrikes on the Gaza Strip.

Many analysts say Palestinian frustration with the Israeli occupation and settlement-building in the West Bank, comatose peace efforts and their own fractured leadership have helped feed the unrest.

Israel says incitement by Palestinian leaders and media is a leading cause.

The status of Jerusalem is one of the most difficult issues in the Israeli-Palestinian conflict.

The Palestinians see east Jerusalem, which Israel occupied in 1967 and later annexed, as the capital of their future state.

Israel views the whole city as its capital.

US President-elect Donald Trump recently stirred fresh controversy over Jerusalem's status by vowing to break with years of precedent and move the US embassy there from Tel Aviv.

Last week, Palestinian president Mahmoud Abbas warned that doing so would cross a "red line" and could jeopardize peace prospects.