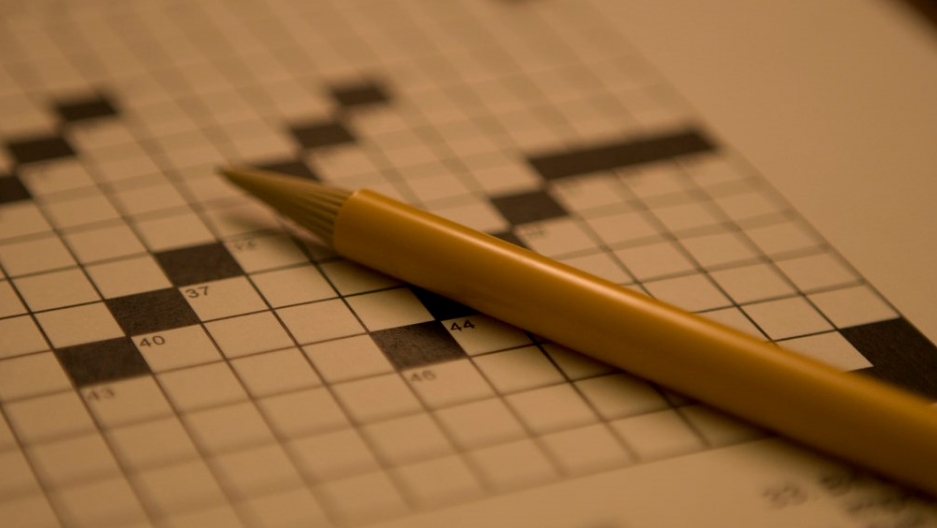 Before you hit the Audubon books, here’s another hint: “The English language is incredibly fluid,” says Brendan Emmett Quigley.

Quigley has been making crosswords for The New York Times for two decades, ever since he was a senior in college. That makes him a "cruciverbalist" — and as he explains it, his job is to twist the mind of the crossword puzzle’s "solver."

“You want to make things that look like verbs, [but] actually are nouns and that sort of thing,” Quigley says. (The answer to the colorful swallow clue, by the way, is "jello shot.")

To set up your own crossword puzzle, Quigley suggests starting with a theme. He says the theme is the puzzle’s “calling card,” and links all the long answers in the grid. You don’t need to overthink your theme, but you should have fun with it.

"It could be something incredibly simple like a category, where you have a bunch of answers — say, answers that begin with parts of a bicycle, like 'chain of fools,' 'pedal pushers,' 'handlebar mustache,'" he says. “You want to find a new way to sort of play with the English language. And really the hardest part of any puzzle is coming up with that gimmick.”

With your theme chosen, next up is slotting answers into your grid (which can be small for your first puzzle — Studio 360’s Kurt Andersen made one using a 4-inch by 4-inch grid). Quigley says the easiest way to fill in a puzzle grid is to choose answers that follow the pattern of “vowel, consonant, vowel, consonant.”

“We want to think of answers that will give us the most flexibility going down,” he says.

Once you have your grid filled out, you can start writing entertaining clues — steering your solver back towards the puzzle’s theme, if need be. Again, the emphasis here is on wordplay.

"One of my all-time favorite clues Mike Shenk wrote for The Wall Street Journal. It was, 'strips in a club,'" Quigley says. "And the answer was 'bacon.'"

For Quigley, the goal is to make crossword puzzles that stymie the solver for just long enough. “There's a rule in puzzle making that says, 'This is a battle, and that the puzzle maker is expected to lose,'” he says.

So if an answer requires some kind of specialized knowledge (for instance, if it’s a proper noun), Quigley advises making the answers going the other way in the puzzle easier to solve. Otherwise, your solvers will have a tough time filling in the square where the two answers cross. Quigley discovered this rule the hard way:

“A crossword blogger by the name of Rex Parker critiqued one of my puzzles in The New York Times, where the illustrator 'N.C. Wyeth' crossed the Boston town 'Natick,'” Quigley explains. “[Parker] said, 'Who in their right mind is going to understand what's going to fit in that one square? It's totally unfair. From now on, this shall be known as the Natick Principle.'”

Some crossword solvers might not find the answers of Wyeth and Natick to be so arcane, but for Quigley, that’s beside the point.

“When you solve a puzzle, you want to go, ‘Wow, I am so clever for figuring out all of these clues, and figuring out the theme and that was a great puzzle. I had a great time with that.’ You don't want them to go, ‘Brendan, you're a jerk for putting those two answers in there.’”

Hint taken. And for more puzzle-making inspiration, check out the crossword puzzle that Quigley created (in just a few minutes!) with Studio 360.