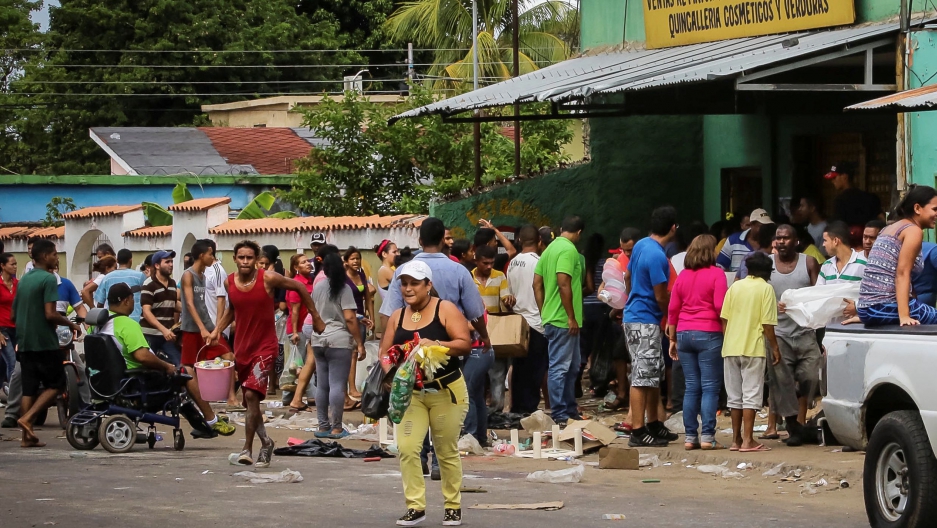 People carry goods taken from a supermarket after it was broken into, in Ciudad Bolivar, Venezuela, on Dec. 17, 2016.

In Venezuela, the food shortage has become so dire that some people spend their days picking up grains of rice and corn that fall out of delivery trucks.

That's according to Hannah Dreier, a correspondent for The Associated Press who is based in the South American country. She contributed to the AP's recent investigative report about the state of affairs and has seen firsthand that many people are on the brink of starvation.

Venezuela's failed economy plus political upheaval are largely to blame for the food crisis. But that's not the whole story, as the AP's in-depth coverage shows: In fact, the Venezuelan military is profiting from people going hungry.

The country relies on imports for most of its food supply, but its financial difficulties have meant it has tried to get by with less — too little for its 30 million people. That has led to some desperate measures: residents barely getting a single meal in a day — looting and violence.

In an effort to address the crippling shortage, President Nicolás Maduro, who has refused aid from various humanitarian organizations worldwide, put the armed forces in control of the national food system this past July.

Many Venezuelans are migrating to Colombia. It used to be the other way around.

Starving zoo animals are a 'metaphor for Venezuelan suffering'

This means that the Venezuelan military is in charge of everything from food distribution to prices. However, instead of confronting the hunger problem, the military is trafficking in food — and it has been taking kickbacks at every turn, according to the AP.

“What we found is that the military has turned it into a racket," said Dreier, adding that "they’re making money on everything from the contracts to when the food gets sold at the market.”

For example, one businessman told the AP about how he secured a contract with the food minister, to import corn: “The corn was billed at double the going rate, so Venezuela gave him a contract to import $25 million worth of corn for $50 million,” she said. The man "was able to get that sweet contract because he gave millions in kickbacks to the food minister.”

Meanwhile, for most residents, basic staples are hard to come by: People are waiting in food lines, some are even “going [through] the trash every day, looking for any scraps of food,” and children are dying of malnutrition, Dreier said.

The military's role here isn't lost on the public. Thousands of protesters have taken to the streets to express their outrage about hunger and other problems.

“One thing that a lot of people said to me was they feel like the military is getting fat while their children get skinny," she said, adding, "there are these military guys who are walking all around them who have nice shirts and nice cars, so nobody is missing what’s happening. But there is a sense that the authorities don’t care.”

Venezuela's food shortage is closely tied to the collapse of oil prices in 2014. There were underlying economic problems before that, Dreier said, but “domestic production of food had been drying up for years after the government nationalized farms and factories. But it kind of didn’t matter because there was so much oil money, and the price of oil was so high," Dreier said.

However, when the price of oil plummeted, a whole host of economic issues came to light. Including an inability to pay for imported food.

Now, despite widespread unrest among Venezuelans, “one clever thing that Maduro has done is, he’s really managed to stifle discontent within the ranks of the military.

"Venezuela has a long history of the military participating in coups, and that's always the question here: ‘Is the military going to rise up against Maduro, who's very unpopular?’ And by doing this, by putting the military in charge of food and allowing them to run these corruption scams, a lot of people think Maduro has successfully pacified the military,” she said.

In terms of digging into the corruption, that's probably up to Venezuela's opposition-led congress, according to Dreier. (The socialist administration controls all the other branches of government.) The congress, having seen the overpayments in the Food Ministry's annual report, has already censured the food minister for corruption. President Maduro's response to that, Dreier said, has been that "'the congress is trying to attack the Socialist Party and, I'm ignoring this.'"

It's unclear where things will go from here given that, “for now, there aren't strong independent institutions that can really take on the issue of corruption until the government itself decides it wants to do that,” Dreier said.

Separately, prosecutors in the US are investigating officials because “some of these bribes, we think, went through the US financial system."​