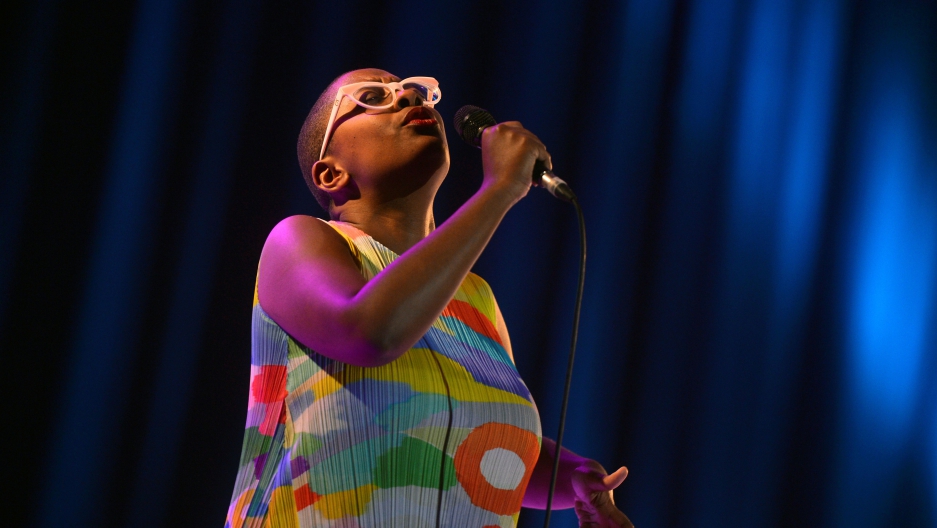 Tavis Smiley finds encouragement for the new year in music, like that of singer Cecile McLorin Salvant, pictured here at the 40th Festival of Jazz in Vitoria, northern Spain, on July 16, 2016.

I spent my New Year's Eve as I always do — at church.

"Watch Night," as it's called, is a long tradition in the Black Church. It started on New Year's Eve in 1862, when slaves gathered in churches to await news and confirmation of the Emancipation Proclamation by President Abraham Lincoln, which came out the next day: Jan. 1, 1863.

The New Year's Eve get-together became a ritual, and it has held (some services also relate to a tradition that began earlier): Black folks are still meeting in churches on the holiday — staying up past midnight thanking God, although we could debate whether true freedom has actually come. There's a difference between freedom and liberation, but that's another piece for another time.

Nonetheless, like my ancestors, I find it comforting to know (especially right about now) that I'm not alone in the darkness that threatens our democracy.

I have absolutely nothing against my friends who go out and "turn up" on New Year's Eve. Or those who choose to stay in, avoiding the drunk drivers and the random bullets. But, for me, bringing in the new year on my knees, praying, is the only way I know to express my profound gratitude for another 365 chances to try and get it right.

The death angel seemed to hover unceasingly last year. If I took nothing else from 2016, I was reminded time and time again that life is precious, that not a one of us is going to get out of here alive. I've recommitted myself to wringing everything I can, out of every day I have.

And, so, about seven hours after Watch Night service was over, I boarded a flight from my home in Los Angeles to New York City for the one thing that always speaks to my heart.

What kind of music? My friend Quincy Jones always reminds me that there are really only two kinds — good and bad.

It's hard not to be inspired on the first day of the new year when you're listening to Cecile McLorin Salvant, and the jazz master Wynton Marsalis shows up to sit in with her. You couldn't ask for a better combination of spirit and soul, and they touched both of mine.

It's hard to not be uplifted on the second day of the year, when Chris Botti does that thing he does with his horn that gets all up inside of you and makes you feel like you're soaring along with him.

It's hard not to feel purposeful on the third day of the new year when you're watching the brilliant Marcus Roberts guide his band through a powerful song called "Tomorrow’s Promise." It gives you perspective as you reflect on yesterday, and wrestle with how to make today a masterpiece. The fact that Roberts is blind creates an even deeper sense of appreciation for his gift, and it serves as a reminder to stop before you even start making excuses. About anything.

As I write this piece on the long flight back home to Los Angeles, I'm marinating on all that soul-stirring, spirit-lifting, life-affirming music. Music is pregnant with a power that can help turn our dark todays into bright tomorrows. Music trumps melancholy. Pardon the pun.

We have some difficult days ahead, to be sure. It's going to be a bit bumpy at takeoff, Friday, January 20. You will no doubt have to keep your safety belt fastened for the entire, four-year ride.

As every flier has heard countless times, you can't help anyone else, unless you first help yourself. So to quote my grandmother Big Mama, it's time to "get your mind right."

In music, there is a freedom that allows us to speak truth to power, and to the powerless, in times like these. "Artists are the gatekeepers of truth," said the great Paul Robeson.

I do not know what you like to listen to, but I do know that music can help you navigate the madness. Music is more than the soundtrack of our lives, music is life itself. So, let the music get into you.