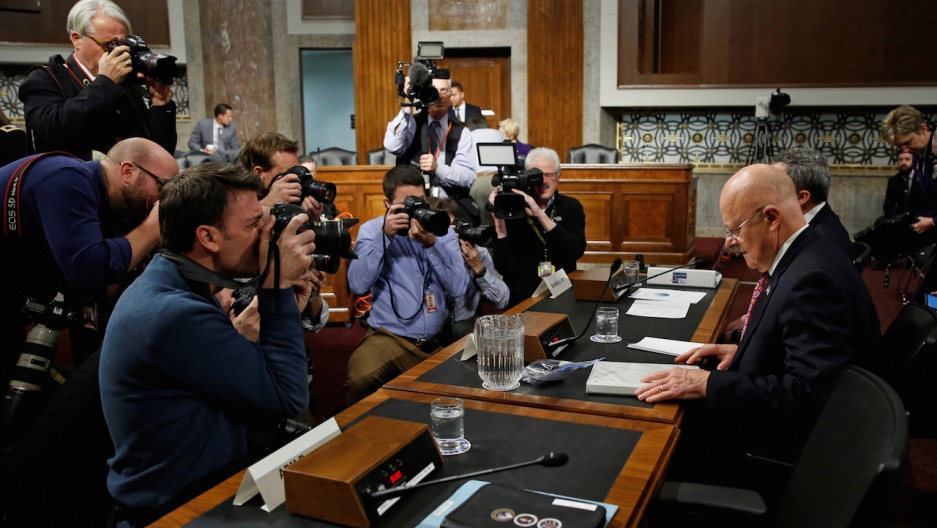 Editor's note: This story was published in January. Congress is still investigating Russian attempts to influence the 2016 US presidential election. FBI Director James Comey and Mike Rogers of the National Security Agency testify before the House Intelligence Committee on March 20. You can watch those proceedings here.

US spy chiefs insisted Thursday they have strong evidence that Russia mounted an unprecedented bid to disrupt the American election, standing firm in the face of Donald Trump's refusal to accept their conclusions.

One day before the heads of four intelligence bodies brief the president-elect on their assessment of Russian meddling in last year's race, Director of National Intelligence James Clapper told a Senate hearing he had "very high" confidence in their findings.

"The Russians have a long history of interfering in elections, theirs and other people's," he told the Armed Services Committee. "But we have never encountered such a direct campaign to interfere with the election process as we have seen in this case."

"This was a multifaceted campaign. So the hacking was only one part of it, and it also entailed classical propaganda, disinformation, fake news."

Clapper, National Security Agency chief Michael Rogers and Marcel Lettre, undersecretary of defense for intelligence, told the committee in a joint statement that "only Russia's senior-most officials" could have authorized the operation, in which hackers stole Democratic Party files and emails, which were then disseminated via WikiLeaks, embarrassing the party and harming losing candidate Hillary Clinton's White House effort.

Trump, who has pledged to bring about a rapprochement with President Vladimir Putin's Russia after taking office on January 20, has repeatedly dismissed that finding.

The Republican president-elect has mocked via Twitter past intelligence errors of the CIA, FBI and other agencies, challenging them to prove that the hacking and leaks could be traced up to the top of Putin's government.

Thursday's much-anticipated hearing, which came ahead of the expected release early next week of a comprehensive White House report on Russian election interference, did not offer any new evidence.

When asked by senators to provide more proof, Clapper repeatedly said he could not do so in public, saying it risked damaging the intelligence community's sources and operations.

"We have invested billions, and we have put people's lives at a risk to glean such information," he said.

Trump will be briefed Friday by Clapper, Rogers, Federal Bureau of Investigation director James Comey and Central Intelligence Agency Director John Brennan on the details of the report, amid concerns Trump has already soured relations with key parts of his national security establishment.

Asked if the report will ascribe a motive to Putin for allegedly ordering the campaign, Clapper replied: "Yes, we will ascribe motivation."

The World spoke with Chris Porter, a manager with the cyber security firm FireEye, who followed the hearing closely.

“In a lot of ways the intelligence community is confirming the long-held views held at FireEye that these activities were sponsored by the Russian government,” he said. “There’s a great deal of technical evidence that the Russian threat group APT28 compromised the DNC and did many of the other election related hacks that they’re accused of.”

Before working at FireEye Porter worked at the CIA, briefing the West Wing on cyber threats. He noted Thursday that evidence of hacking and intent are two separate issues: Whether the Russian government intended to aid Trump’s election or just to sow chaos in the US electoral process is unclear, he said.

“I think it’s difficult to disentangle the Russian government just continuing to advance their foreign policy message from the effect on the campaign. They made a decision early on that they were going to undermine confidence in the US election and to me that’s the real story, that they wanted to sabotage whoever got elected president,” said Porter.

In addition to casting doubts on their conclusions over Russian interference, on Wednesday Trump raised more hackles by citing WikiLeaks founder Julian Assange to suggest that anyone, even a 14 year old child, could have been behind the hacking.

Without naming Trump, Clapper said there was "a difference between healthy skepticism and disparagement" of the intelligence community.

"And I've received many expressions of concern from foreign counterparts about, you know, the disparagement of the US Intelligence community," he said.

"Public trust and confidence in the intelligence community is crucial," he said.

Asked about Assange's credibility, Clapper said his publication of leaked materials had "put people at risk."

"I don't think those of us in the intelligence committee have a whole lot of respect for him," Clapper said.

Nevertheless it was not clear whether the unclassified public version of the upcoming White House report on Russian activities -- which will have sensitive materials removed to protect intelligence operations -- will satisfy demands for more proof.

Clapper said he will "push the envelope" on what can be divulged in the declassified report "because I think the public should know as much about this as possible."