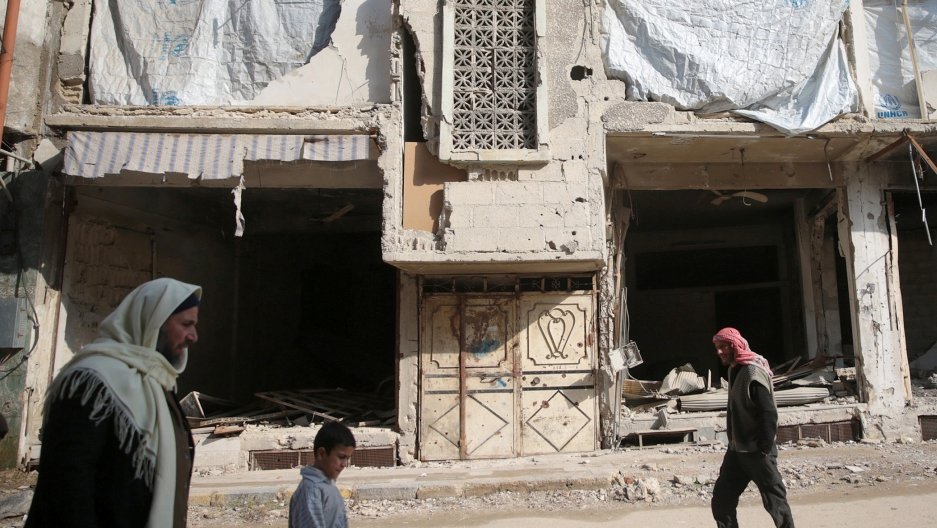 People walk past a damaged building in the eastern Damascus suburb of Ghouta, Syria.

The water from rebel-held Wadi Barada, which supplies four million people in Damascus, has been cut since December 22, causing major shortages.

The regime and rebels have traded accusations over responsibility.

Government forces backed by Lebanon's Hezbollah group are fighting to recapture the area northwest of Damascus even as a nationwide ceasefire has brought quiet to other parts of Syria in preparation for renewed peace talks.

The truce, brokered by regime backer Russia and rebel sponsor Turkey, was meant to pave the way for peace negotiations later this month in the Kazakh capital Astana.

The Syrian Observatory for Human Rights said regime forces late Wednesday launched "dozens of air strikes on parts of Wadi Barada along with artillery and rocket fire, killing a firefighter."

The Observatory, a Britain-based monitor of Syria's conflict, said pro-regime forces and rebels were locked in ongoing clashes there Thursday.

Retaking the area became an urgent priority for the regime as the cut caused severe water shortages in the capital.

Damascus residents said they have been forced to buy bottled water at twice its normal price as their supplies have run low.

"We used to complain about power cuts, but now we can see that it's nothing compared to the lack of drinkable water. Water is life," said Faiz, a 50-year-old civil servant.

Riham, 49, of Mashrou Dummar district, said she has not been able to bathe or wash her clothes for a week. The water in her own tank had almost run out and she only uses it for absolute necessities.

The public water authority has published daily updates on its Facebook page telling residents where and when water will be distributed.

But locals said the water often fails to arrive and when it does, is undrinkable.

Mohannad, 53, said he buys drinking water at twice its normal price. A 10-liter bottle that sold for 500 liras before the mains water was cut now sells for 1,000 liras.

"It's an unexpected cost on top of that fact that living is already expensive," Mohannad said.

The regime says forces in Wadi Barada include former al-Qaeda affiliate Fateh al-Sham Front, previously known as Al-Nusra Front, which Moscow and Damascus say is excluded from the ceasefire.

Rebels deny the group is in the area.

The fighting near Damascus threatened a truce that was meant to pave the way for peace negotiations later this month in the Kazakh capital Astana.

Observatory Director Rami Abdel Rahman said the truce was in a "critical phase" with violations on several fronts. But he said fighting had eased considerably since the truce came into force.

"The number of casualties has fallen a lot, with only 13 dead in the areas covered by the ceasefire since the truce began. That would have been the toll of a single air strike before it came into force."

French President Francois Hollande on Thursday called for respect for the ceasefire, "particularly by the regime" so peace talks could go ahead.

"Every effort should be made to ensure that the negotiations envisaged by the United Nations can take place within the envisaged timeframe," his office said.

Turkey's Foreign Minister Mevlut Cavusoglu warned Wednesday that regime and Hezbollah violations of the truce were putting the Kazakhstan talks at risk.

"When we look at who commits these violations, it is Hezbollah, in particular Shiite groups and the regime," he said.

He urged Russia and Iran, which both back President Bashar al-Assad and are also helping prepare the Astana talks, to pressure Damascus and Hezbollah to stop the fighting.

Iran hit back at "unconstructive" Turkish allegations that Tehran's allies were violating the ceasefire, accusing rebels of breaking the truce.

Despite backing opposite sides in the conflict, Ankara and Moscow have worked closely to broker the ceasefire and plan the Astana talks, which Cavusoglu said could take place on January 23.

Regime ally Iran is also involved in organizing the talks, and top official Alaeddin Boroujerdi was in Damascus on Wednesday for talks with Assad.