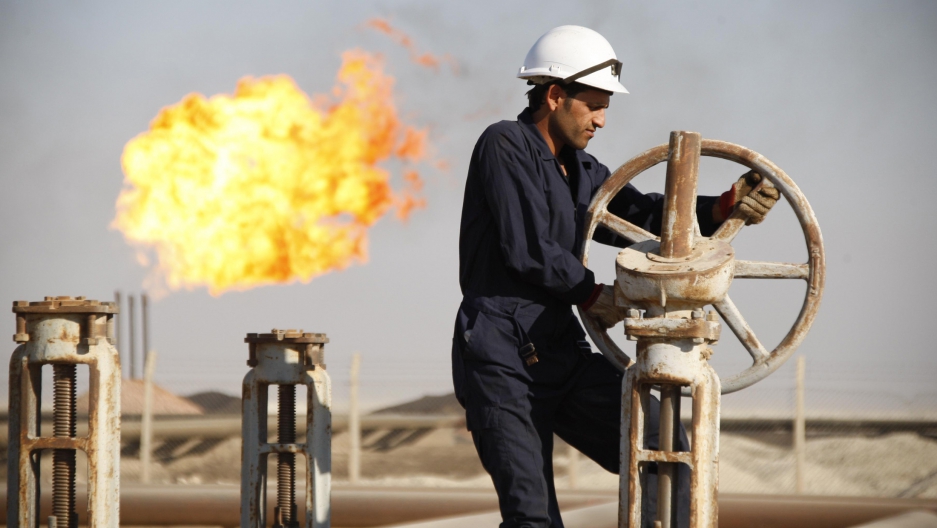 A worker adjusts the valve of an oil pipe at West Qurna oilfield in Iraq's southern province of Basra, under development in 2010 by ExxonMobil and partners.

A 2011 oil exploration deal, between Exxon Mobil and Kurdish leaders in northern Iraq, could raise concerns as the US Senate prepares for confirmation hearings on President-elect Donald Trump's choice for secretary of state: Rex Tillerson, the former CEO of the US oil giant.

Journalist Ben Van Heuvelen was in Baghdad in 2011, covering Iraq’s reconstruction efforts and the renewal of its oil industry. And he witnessed how close Exxon's deal in Iraqi Kurdistan came to causing a violent conflict.

"Just as Exxon was ramping up their projects … in southern Iraq with the federal government, Tillerson also green-lighted negotiations with the autonomous Kurdish government in the north," recalls Van Heuvelen, who is now managing editor of Iraq Oil Report.

The Kurds had escaped most of the destruction of the first Gulf War thanks to US protection under a no-fly zone. By 2011, they had consolidated their hold over a region of northern Iraq that contains, by some estimates, 40 percent of the nation’s oil reserves. Kurdish leaders were eager to exploit the oil wealth under their feet.

"Oil provides almost all of the revenue for the Iraqi government, and whoever controls the oil has an enormous amount of power," Van Heuvelen explains. "The Kurds in the north wanted to have control for themselves, and the federal government in Baghdad thought that this was a national resource that should be managed centrally."

Many Kurds in 2011 had an eye on their future, possibly independent of Baghdad. "So the Kurdish government was trying to sign contracts with big companies as a way of solidifying their policy position,” Van Heuvelen says.

In October 2011, Exxon officials signed a contract — not with Baghdad, but with the Kurds — to drill for oil in Iraqi Kurdistan.

"This became a very controversial move,” says Van Heuvelen, “because it effectively inserted Exxon right into the middle of one of the biggest political fault lines in Iraq, between a majority Arab population and the minority Kurdish population."

Baghdad authorities were furious. And the United States, which has long supported a unified Iraq, wasn't pleased either.

A giant American corporation, by cutting a side deal with the Kurds, had undermined the delicate diplomacy that was holding Iraq together.

Iraqi federal troops and Kurdish soldiers deployed to strengthen their positions in sensitive areas, including in places where Exxon planned to drill.

“The tensions escalated to such a point that there was actually a shootout on the disputed border between the Kurdish territory and federally controlled territory,” Van Heuvelen recalls.

Violence broke out on Nov. 16, 2012, as told by Iraq Oil Report, "when a minor confrontation in the disputed town of Tuz Khurmatu exploded into a shootout between Kurdish and Iraqi security forces that injured several soldiers and left one bystander dead."

“But that caused each government to send thousands of troops to that disputed border," Van Heuvelen says. "So there were several months where those troops … tanks and artillery crews, [were] within range of one another's weapons, just sort of staring at each other. And at one point Prime Minister Nouri al-Maliki … issued a very direct threat saying that if Exxon were to put a drill in the ground they would consider it an act of war.”

In time both sides pulled back their troops and tensions eased with some American mediation. But it was a close call.

When Tillerson appears for confirmation hearings, senators may way want to get his view of the Kurdish oil deal and its impact on the complex politics of Iraq.

”What was Rex Tillerson's understanding of US policy in Iraq at the time?" Van Heuvelen wonders. "And did he put Exxon's business interests above the US policy toward Iraq and the stability of the country?"

"Tillerson has spent his career making hard-headed decisions based on a single metric: how to maximize value for Exxon's shareholders,” Van Heuvelen says. “In Iraq, this aggressive pursuit of business interests apparently left him blind, or at least indifferent, to the ways in which his actions would worsen the country's political instability."

Van Heuvelen, like many who have watched Tillerson conduct business for Exxon, wonders whether the former CEO can shift his focus in the service of his country. "The key question going forward is whether he will continue to view foreign policy through the lens of an oil man, or whether he will adopt a more multi-dimensional view of how to define and pursue American interests abroad."