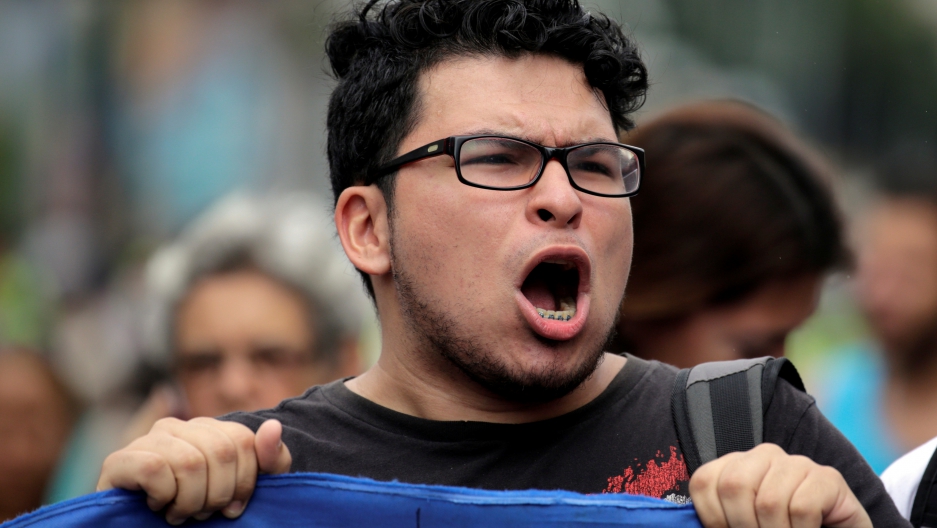 Demonstrators have accused the government of Venezuelan President Nicolas Maduro of systemic corruption.

Latin American transparency activists are keen to see what becomes of the Office of Congressional Ethics, a corruption watchdog in the US House of Representatives that's now in the media spotlight.

Republican lawmakers voted to gut the powers of the independent office Monday night. But on Tuesday they withdrew the plan under heavy criticism, including from President-elect Donald Trump.

Alejandro Salas, Transparency International's regional director for the Americas, worries that the US is sending mixed signals to those fighting corruption around the world.

"I'm very worried, not only from what happened [Tuesday] in the discussion in the [US] Congress about the ethics office, but also this issue that the president had to hold to certain conflict of interest rules," Salas says. "The US has historically had very strong institutions that create checks and balances and through their autonomy they can control those they are meant to be controlling."

Salas also worries about what that will do to the United States' credibility.

"One has to lead by example. If you look in the recent past, many of the big scandals at the global level — for example FIFA, or last year there was also a scandal in the United Nations and more recently with Odebrecht, the huge Brazilian construction company linked to the Petrobras scandal — the US has been prosecuting, chasing and has been putting a stop even to these global corruption problems. So we have to be very careful that the US doesn't start sending the wrong messages."

Transparency International has programs all over the Americas, including in Argentina, Bolivia, Colombia, Honduras, Peru and the Dominican Republic. Within the region, only Canada is seen as "cleaner" than the United States when it comes to official corruption, according to the group's data.

But is that about to change?

"I'm worried ... with many of the things President-elect Trump is doing like saying 'Well no problem for me with the conflict of interest,' or appointing people that are likely to have conflicts of interest. And they are not disclosing their whole tax history," Salas says.

"I'm not accusing anyone because maybe it's too early to say, but the fact that these things are called into question and are constantly in the news is a yellow light that at least we need to pay attention to closely."