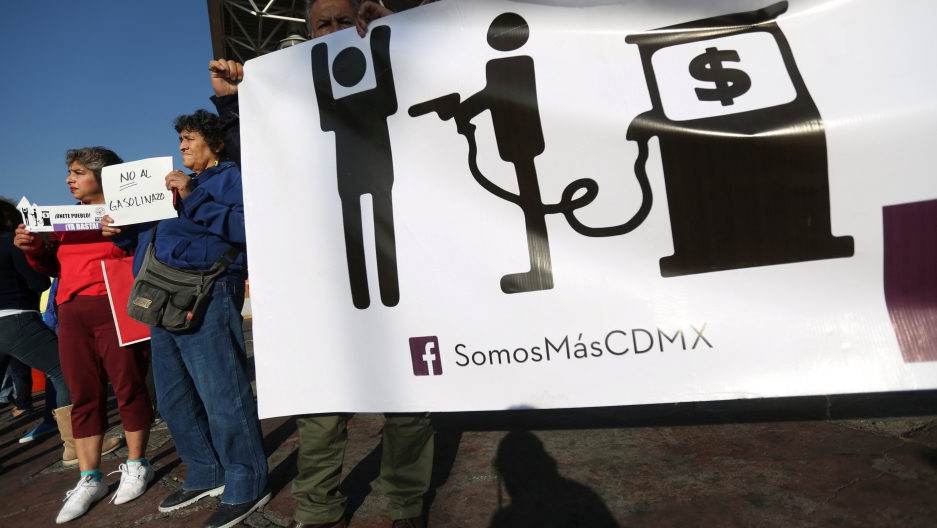 Protesters block the entrance to a gas station during a demonstration against rising gas prices at Tlalpan avenue in Mexico City, this week.

Since Donald Trump's election, Mexico's economy has been reeling.

The latest blow is a hike in the price of gasoline.

From her base in Mexico City, reporter Karla Zabludovsky has been writing about it for BuzzFeed News.

She told us the streets there erupted in protests this week in response to spiking gas prices.

And she filed this report on the latest for BuzzFeed:

If Mexico ended 2016 concerned about the consequences of US President-elect Donald Trump's protectionist economic policies, it has grown outright fearful in 2017.

Still reeling from a sharp increase in gas prices on Jan. 1 and frustrated by the currency's ongoing fall — the peso lost about 20 percent against the dollar last year — Mexicans were confronted Tuesday with Ford's announcement that it had scrapped plans to build a $1.6 billion plant in Mexico. Earlier that day, Trump threatened General Motors with a "big border tax" for building one of its compact car models south of the border.

"This catches us at a moment of enormous complexity," said Armando Rios Piter, a senator from the opposition Democratic Revolutionary Party. "This bloodbath could continue in a massive way for the next few months."

The peso was the second-worst performing major currency in the world last year, behind the post-Brexit UK pound. Its deep tumble is widely attributed to a number of factors: a fall in oil prices, the resignation of the president of the Mexican central bank last month — and Trump's victory. ...

Read the rest of the story here.