Lobzang Jivaka (fourth from left) at Rizong Monastery in Ladakh, northern India, with some of his fellow monks, in 1960.

At the age of 28, Dillon registered under the name of Lawrence Michael, becoming legally male. Over several years in the 1940s, he also underwent a groundbreaking physical transition from female to male through a series of surgical operations.

But all of that was just part of this Englishman’s remarkable story of personal transformation.

Dillon tells the story in a memoir called, “Out of the Ordinary: A Life of Gender and Spiritual Transitions.” The book was published in November, more than a half-century after Dillon’s unexpected death in 1962.

As a child, Laura always liked boy stuff, like a military coat with anchor buttons. But when Laura got a little older, people said it was high time to give up the tomboy thing and start acting like a young lady.

Dillon wrote about one incident that happened during the year before starting college. On a seaside walk, a boy opened up a gate and stepped aside to let Dillon walk through first. And Dillon felt crushed.

“He thinks I’m a woman,” he wrote much later in life.

A lot of trans people experience moments like these, says Jacob Lau, a postdoctoral fellow at the University of California, Irvine.

“The world acknowledges you as a kind of gendered being that you aren’t,” Lau says, "[And] sees you in ways that you don’t see yourself.”

Lau calls it “a moment of misrecognition.”

“That moment at the gate is one of the most striking moments in the book to me,” says Cameron Partridge, an Episcopal priest and former lecturer at Harvard Divinity School.

Related: These photos show the courage and tragedy of LGBTQ life in Peru

Partridge and Lau helped get “Out of the Ordinary” published and they wrote an introduction for the book.

During the 1940s, medical transition was almost unheard of, which made Dillon sort of a human guinea pig, says Lau.

“Testosterone … had just been synthesized, back in the 30s, and at that point, testosterone was given in oral tablets or pills, which is discounted because it destroys your liver,” Lau says.

A therapist who said he could help Dillon gave him the pills as sort of an afterthought.

But the hormones were a great help, Dillon wrote. They gradually helped him look more like a man, for example, by making it possible to grow a beard.

Dillon also met sympathetic professionals, including physicians, who helped him legally change his name. That was in 1943, and Partridge says this was a turning point in Dillon’s life.

“It’s huge. And he wasn’t the only one who did it,” Partridge says. “He references when he went to re-register, whoever was behind the desk — and it makes me think about these little moments where we interact with the person behind the desk, how significant that can be — and he says, ‘Oh, we’ve had a few of these.’”

It’s hard to say how many people in the United Kingdom legally re-registered to change their names from one gender to another around that time. But Dillon was definitely a pioneer.

He found a plastic surgeon to perform a double mastectomy. And in 1945, Dillon became the first person born female to undergo phalloplasty surgery. He went through a series of 13 operations over several years to construct male genitalia. 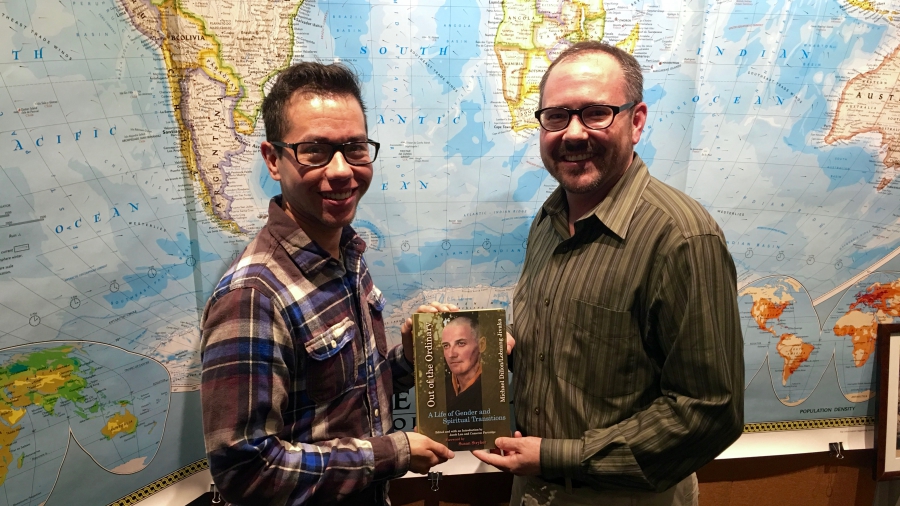 Jacob Lau (left) and Cameron Partridge worked together to finally get the memoir of Michael Dillon/Lobzang Jivaka published. The book came out in November 2015.

But these details of Dillon’s physical transition are not the primary focus of his memoir. Partridge, who is also also a trans man, says this is one thing that fascinated him about Dillon’s book.

“Oftentimes, memoirs by trans folks are expected to kind of be framed by … transition,” Partridge says.

“That’s not the fulcrum of this book at all. It’s a journey and it’s a search after truth. And it has lots of different peregrinations. And it is saturated with [Dillon’s] spiritual quest.”

Dillon grew up in the Church of England and he credited men of the clergy with getting him to think seriously about the purpose of life.

That question propelled Dillon through different phases of his own life, as a student at Oxford, as a surgeon with the British Merchant Navy, and in the last phase of his life, as a novice Buddhist monk in India.

For Lau, who was going through transition himself when he started working on this book project, Dillon’s story helped him get through some difficult times.

“I was going through divinity school,” Lau says. “And I had a lot of personal resonances with a lot of his questions about transitioning.”

“Working on the project helped me get through a lot of … not great periods of my life as well.”

For Dillon, his lowest point came in 1958, when he was outed by the press. He was working as a physician on a French ship ironically named the Liberté. And suddenly, after 15 years, his secret was out.

Reporters showed up on the ship and wanted to take Dillon’s picture. He let them, and he answered their questions. Then, he made up his mind to flee to India.

At first, Dillon simply wanted to escape public scrutiny. But he soon found a new life path in Asia. He got serious about Buddhism and decided to become a monk. Partridge says this part of Dillon’s story resonated with him, as someone who also went through an ordination process as a trans man.

“I really connected with the memoir in a personal way,” Partridge says. “I knew some of the sense of uncertainty and fear of being someone who was openly trans in an ordination process and not really knowing how it was going to work.”

At one point in India, Dillon was outed by one of his own Buddhist teachers. Then came stories in the Indian press accusing him of being a British spy. But he wanted to stay in India to continue his spiritual quest for truth. And eventually, he was ordained in the Tibetan Buddhist tradition.

Dillon took on the name of Lobzang Jivaka — taken from the Buddha’s own personal physician. That was the name he typed, along with his Christian name, Michael Dillon, on the title page of his memoir, in May of 1962.

Two weeks later, Dillon collapsed on a hike and then died in a local hospital at the age of 47.

Later, Dillon’s literary agent in London received the manuscript in the mail. The agent was quoted in a British newspaper saying that, “Dr. Dillon felt there was no reason why, finally, his story could not be told.”