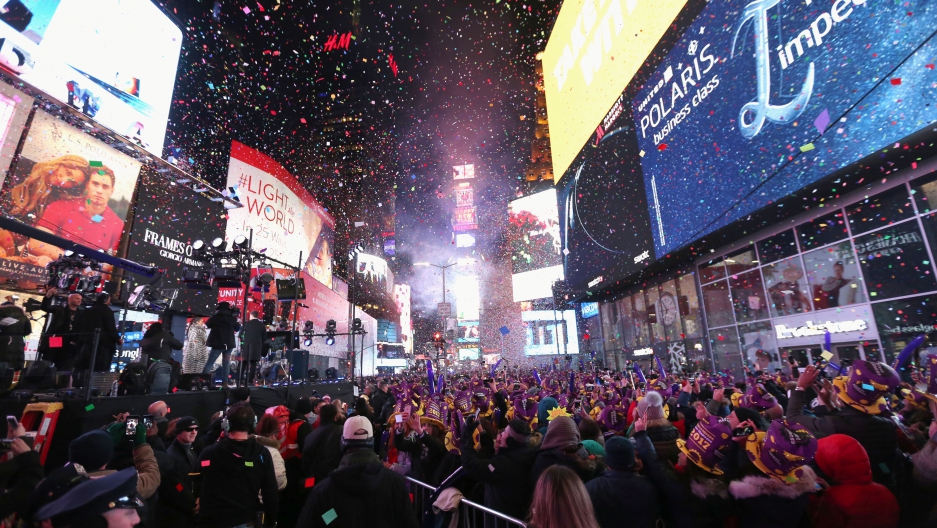 Revelers at the start of 2017 are pictured here at the New Year's celebration in Times Square in Manhattan, New York City, on Jan. 1, 2017.

Perhaps you had today off and could spend another day thinking about the 363 days ahead. Or you, like us, have rolled up your sleeves already. We seem to come upon this new page of the calendar with anxiety and girded for battle. The contests we have lost or the contests we have won. They urge us variously onward to make good on once outlandish-seeming promises or to hold back and defend, to hold in place an America we were once certain was on a far different course than we see today.

Whatever battle we see before us, let's remember that our nation, for all of its flaws, is dedicated to the idea that we can be renewed. That 2017 can become, in an instant, the year zero. We can become someone else, we can choose a different path, we can begin a grand project unconcerned that we might have begun too late, or without the proper training, missing some supposedly crucial paperwork. Or just turn a corner. Simple as that — we begin again.

This is well beyond the impulse for the familiar New Year’s resolution.

If you are on one of these personal quests, I'm with you all the way. But I want to propose something bigger. I want to reach out to the entire community of curious, interested people and renew the idea of public radio, public media. Let 2017 be the year we make something more public, more new, less categorizable, more young, more of everyone in this country. Ralph Waldo Emerson — that very strange New Englander of the century before last — had this to say about the American idea of renewal:

“There are no fixtures in nature. The universe is fluid and volatile. Permanence is but a word of degrees. Our globe seen by God is a transparent law, not a mass of facts. The law dissolves the fact and holds it fluid. Our culture is the predominance of an idea which draws after it this train of cities and institutions. Let us rise into another idea. They will disappear.

“The Greek sculpture is all melted away as if it had been statues of ice; here and there a solitary figure or fragment remaining as we see flecks and scraps of snow left in cold dells and mountain clefts in June and July. For the genius that created it, creates now, somewhat else."

Emerson continues:  "The new continents are built out of the ruins of an old planet; the new races fed out of the decomposition of the foregoing. New arts destroy the old. See the investment of capital in aqueducts made useless by hydraulics; fortifications, by gunpowder; roads and canals, by railways; sails, by steam; steam, by electricity."

We could, of course, add to that list. By silicon, by the computer, by global network communications. This is a curiously American trait. A strength and a flaw, this renewal. A flaw when we gloss over history and reconciliation that needs to happen. But it is still happening.

America's race relations, for instance, are being stirred by events. America's rigid self-images are being re-examined by whoever is in the oval office. This renewal is a strength when we see that our nation need not be imprisoned by inflexible myths and traditions. They are all in play. We don’t have to be the greatest country in the world, because we can all reinvent ourselves, renew ourselves. Let's do it. Let's take action. Let's make public media even more public, make it a powerful voice of all of America and hear that full-throated voice in these conversations on this program and every other.

One more thing. So much has been made of that absurd and menacing sounding border wall that was a promise during the campaign. Ralph Waldo Emerson seems to even have something to say to that:

“You admire this tower of granite, weathering the hurts of so many ages. Yet a little waving hand built this huge wall, and that which builds is better than that which is built. The hand which built can topple it down much faster. Better than the hand, and nimbler, was the invisible thought which wrought through it, and thus ever behind the coarse effect is a fine cause which, being narrowly seen, is itself the effect of a finer cause. Everything looks permanent until its secret is known.”

So let’s choose a cause. And we know a lot more as 2017 begins. Let’s use that knowledge, put aside fear and begin. Begin again.

This commentary was first broadcast on PRI's The Takeaway, a public radio program that invites you to be part of the American conversation.