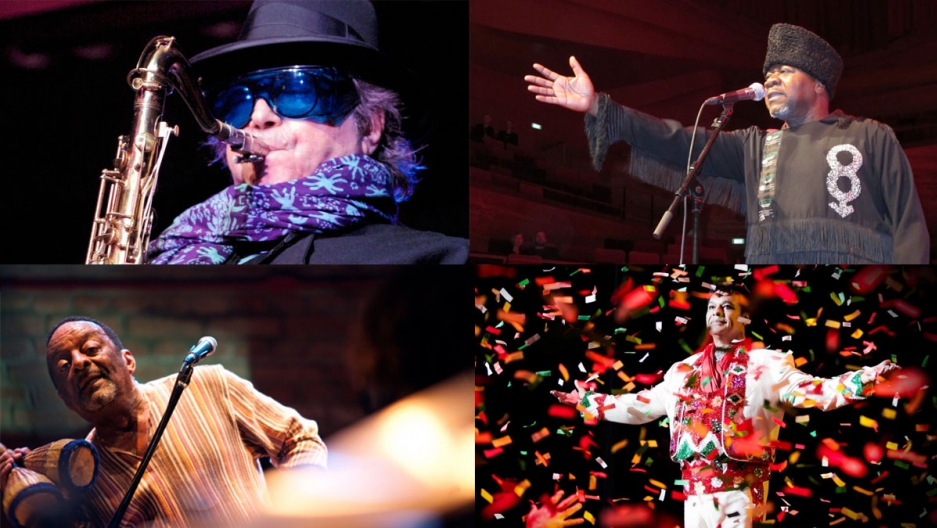 Here are some of the musicians we lost in 2016: Gato Barbieri (top left, clockwise), Papa Wemba, Juan Gabriel and Nana Vasconcelos.

We lost a lot of musicians this year. And many of them much too soon. American soul singer Sharon Jones was 60 when she died, and Prince was only 57. Many of us were unware that yet another icon, David Bowie, had cancer until his death was announced on Jan. 10. He had just turned 69. And just this week, we lost English pop singer George Michael at the age of 53.

Thankfully, we'll always remember these supreme talents through the music they left behind. Here's a collection of some of the finest tunes from artists who passed away in 2016. Check it out in two ways: You can listen to this playlist to see if you can recognize the artists on your own — let us know what you hear in the Soundcloud comments.

Or, walk through some of the music with us below.

In addition to the big-name performers, throughout the year we often noted musicians we lost who were less well-known to American audiences, but whose careers made big impacts elsewhere in the world. We also unearthed global influences in some American artists' songs — for instance, how ancient Egypt made an impact on Maurice White of Earth, Wind & Fire, or how rapper Phife Dawg tapped into his Caribbean roots.

Gato Barbieri was one cool cat, and not just because of his trademark fedora. He earned his nickname (meaning "cat" in Spanish) while sneaking in and out of nightclubs around Buenos Aires when he was a kid. He went on to be regarded as a master saxophonist and bandleader.

Papa Wemba died while performing in Ivory Coast. His singers had been dancing a routine over a guitar solo that appeared to have concluded. And it looked like everyone in the band was waiting for lead singer Papa Wemba to come back with another verse. But he had collapsed in front of the drummer, who was lost in the music. The dancers rushed over to him. And then the music stopped.

Mexican crooner Juan Gabriel died from a heart attack at the age of 66. He was the king of Latin pop music. As reporter Betto Arcos told us, "He wrote simple, yet poetic and powerful songs, and his large repertoire — more than 1,500 songs — was covered by all the major pop singers of the Spanish-speaking world."

Leonard Cohen had one of the most evocative voices ever. And it's his distinctive sound and style as a musician that we'll remember most. We recalled how Cohen, a Canadian, won many hearts in Israel when he performed in the country during the 1973 Arab-Israeli war.

May their music live on, always.