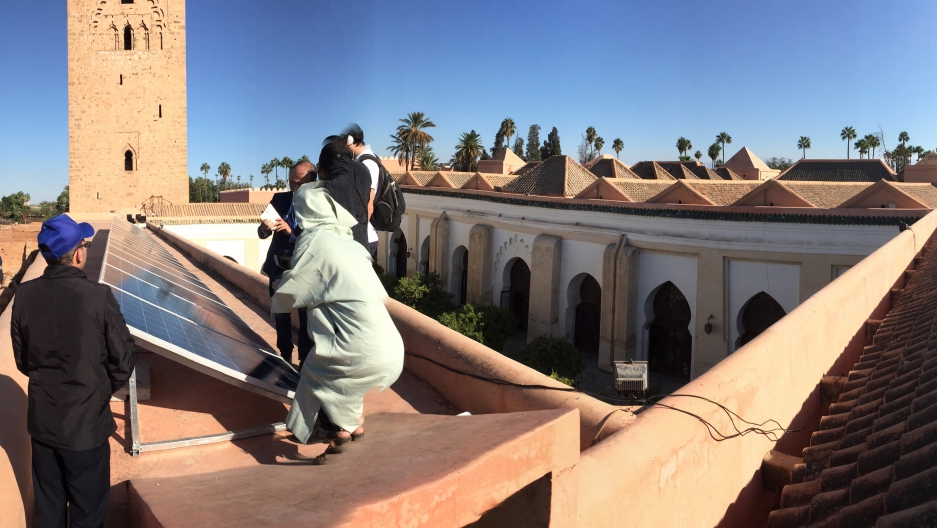 Marrakech’s Koutoubia mosque has soaked up the Moroccan sun for nearly 900 years. Now it also puts those rays to work generating clean electricity.

The Koutoubia Mosque is one of the iconic landmarks of Marrakech’s old city. Its first stone was laid in 1150, and almost 900 years later, renovations continue.

The latest can be found up a flight of stairs off the sahn, or courtyard, where the mosque's visitors wash their feet before they pray. On top of the north riwaq, or arcade, a sleek array of solar panels stretches along the roof to the base of the mosque's 253-foot, red stone minaret.

“This is enough for 100 percent of the consumption of the mosque, including also for the house of the imam," says Ahmed Bouzid, head of energy efficiency for SIE, Morocco’s national energy investment company. “So this mosque is 100 percent powered by solar energy.” 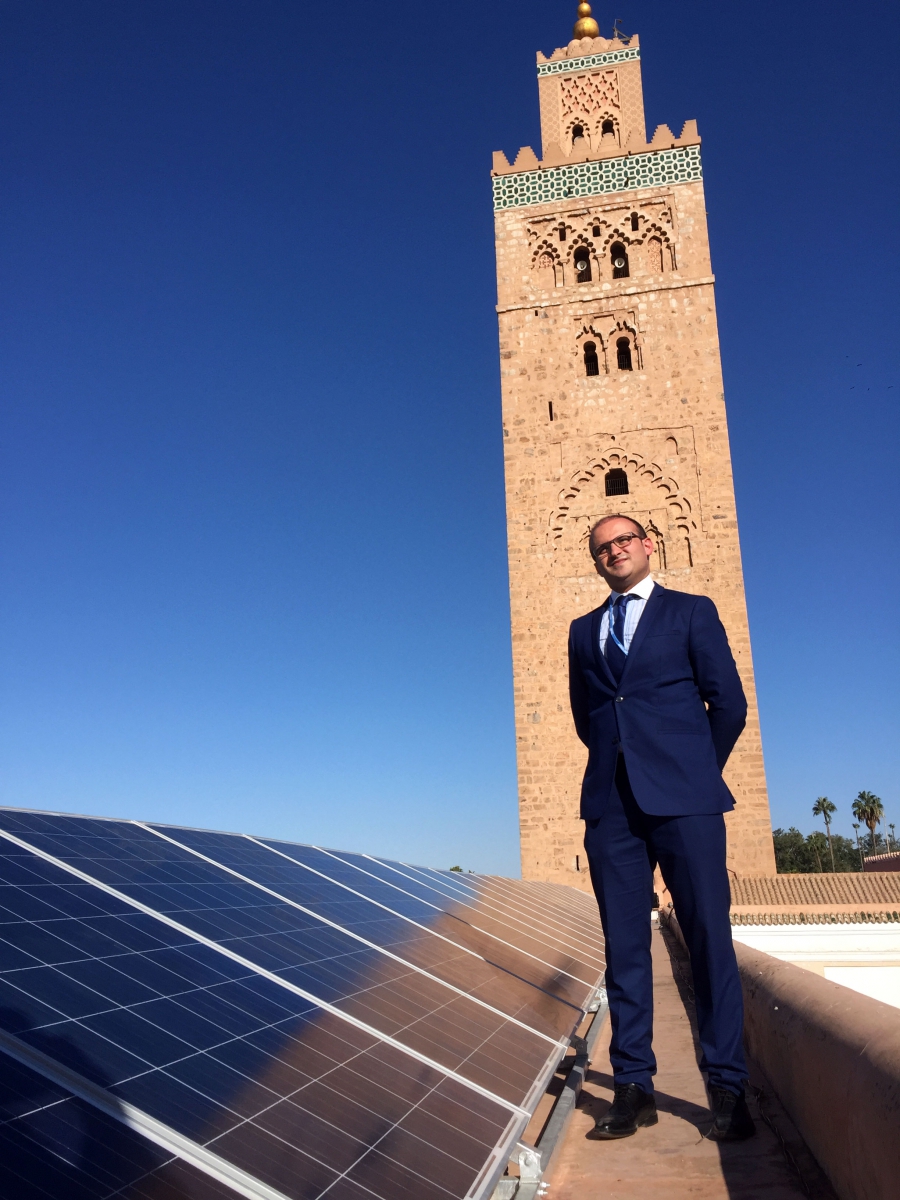 Ahmed Bouzid, head of energy efficiency for Morocco’s national energy investment company SIE, stands beside new photovoltaic panels recently installed on the roof of Marrakech's ancient Koutoubia mosque. It's one of 600 Moroccan mosques slated for similar solar installations over the next three years.

The 8-kilowatt panels were installed just before Marrakech played host to the latest United Nations climate summit in November, and Koutoubia is just one of 600 Moroccan mosques slated for similar solar installations over the next three years. Morocco’s government owns 15,000 mosques, and eventually it wants to retrofit all of them with solar panels and energy efficient technology.

Bouzid says investments in solar power are an easy call here in Morocco. The payback period is typically less than five years. After that, the energy is essentially free.

But he says it’s not just about saving the mosques money.

Morocco is almost completely dependent on imported fossil fuels, but it has a lot of wind and sun. It’s also already being hit by the effects of climate change, through droughts, floods and sea-level rise.

Overall, Morocco has pledged to get more than half of its electricity from renewable sources by 2030, and to cultivate more awareness about energy and climate change in general.

That's why the solar panels on Koutoubia's roof are about more than just cutting the state-funded mosque's energy bills. In this almost entirely Muslim country, the government believes that Islam could be a powerful vehicle for its environmental message.

You can see the effort at work in other ways here as well, like in a classroom on the outskirts of Marrakech where 27 imams and mourchidates, female Muslim clerics, are huddled in small groups, poring over copies of the Quran.

That’s hardly unusual in Morocco, but the subject of their study is. They’re scouring the text for passages about environmental stewardship.

About 300 Muslim leaders from around Morocco have signed up in the last year for the government’s “green mosques” program.

After this study group breaks up, a few imams take turns practicing khutbahs, or sermons, about environmentalism that they’ll deliver to their congregations across the country during Friday prayers, stressing verses from the Quran and other Muslim holy texts.

Often-invoked passages include “corruption has appeared on the land and in the sea because of what the hands of humans have wrought,” and “the servants of [Allah], the Most Gracious, are only those who walk upon the Earth softly.”

Morocco's state-sponsored program to preach environmental stewardship through Islam may be unique, but Muslims in many countries are starting to connect their faith with climate change.

Nana Firman is from Indonesia, the world’s biggest Muslim country, and is a co-founder of the Global Muslim Climate Network. Firman came to Marrakech for the UN climate summit, and she believes that connecting Islam and environmental consciousness isn’t a stretch.

“Over 700 verses in the Quran talk about nature and environment,” Firman says. “For example there’s a verse that says ‘the human is the khalifa upon this earth. The word khalifa means guardian, so you’re the maintainer, the protector, the one who takes care of the Earth.”

Firman and her organization are trying to do globally what the Moroccan government is trying to do locally — encourage Muslims to take steps to reduce their own carbon footprints. But she also has a bigger goal. She wants Muslims to lead the global transition away from fossil fuels.

Making that happen won't be easy, of course. Like a lot of devout Christians, many Muslims don’t believe that climate change is even happening, that humans could be responsible, or that their holy texts preach environmentalism.

“There’s some deniers,” Firman says, but hundreds of millions of Muslims also live in places that are already feeling the effects of climate change. And she says that’s where her message is catching on.

In her native Indonesia, Firman worked on recovery efforts after the 2004 tsunami in the religiously conservative region of Aceh. She says it was hard to convince local people of the benefits of planting mangroves to reduce the impact of storm surges, until she remembered a verse in the Quran about planting trees. Firman says that's when she first realized Islam could help her increase environmental awareness in Indonesia.

Since then she's taken that message worldwide. Last year Firman helped draft the Islamic Declaration on Global Climate Change. It calls on Muslims everywhere to take action, from conserving water during the cleaning rituals of wudu to reducing plastic waste during the annual Hajj pilgrimage to Mecca. 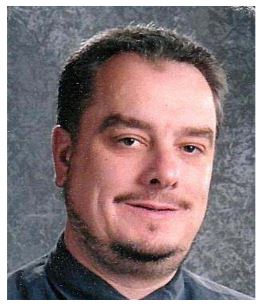 The Islamic Declaration on Global Climate Change came out not long after Pope Francis’ climate encyclical, which said that Catholics have a “duty to protect the Earth … for coming generations.”

Saffet Catovic, an imam and teacher of religious studies from New Jersey, says the efforts among Muslims globally are part of a broad religious awakening on the climate crisis.

“Faith plays an important role not just for Muslim communities but for other communities, as well,” Catovic says. His Noor Ul-Iman school and mosque in Central New Jersey are part of the Islamic Society of North America, which recently announced it would divest from fossil fuels and is pushing other Muslim organizations to do the same.

Catovic also helped write the Islamic declaration on climate change. Since then, he says he’s heard from priests, rabbis and all kinds of religious leaders.

“With this climate change issue, especially these last two years, religious leaders around the world are not praying against each other,” says Catovic, “they’re praying with one another for a common cause. Because the realization has set in that we’re gonna have nothing left.”

So far most of the steps are small, like Morocco's green sermons and solar-powered mosques.

But together they could be a recipe for how religious leaders might help tackle climate change: through a mixture of political will, private investment, and a little faith.

NOTE: Because of a producer's error, the audio version of this story contains an incorrect pronunciation of Saffet Catovic's name. It should be pronounced "Catovik."