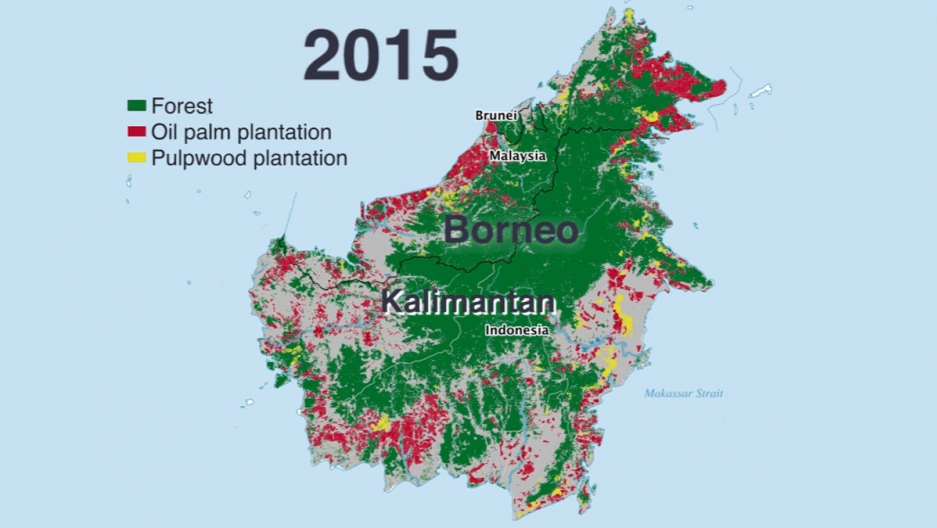 Forests on the island of Borneo are rapidly being converted to industrial plantations for palm oil and paper pulp.

Indonesia has lost almost a quarter of its forest area in the past 25 years.

That’s significantly more than has been lost in the other countries with the most forest area. Russia, the United States, China and the European Union have in fact all added forest cover in the past 25 years.

Deforestation in Indonesia has been driven largely by the conversion of forests to industrial plantations producing oil palms and paper pulp.

Here’s a look at how the island of Borneo has transformed since 1973:

When forests are logged or burned, the carbon stored in the trees is released into the atmosphere and eventually contributes to global warming. As a result, Indonesia was the sixth-largest greenhouse-gas-emitting country in the world as of 2012, the most recent year for which full data is available.

Unlike China, the United States, and other nations ahead of it on the list of top emitters, most of Indonesia’s pollution comes not from transportation or industrial sources, but from deforestation and land-use changes.

Both the government of Indonesia and the private sector are working to reduce deforestation in the sprawling island nation.

Starting in 2020, developed countries will be able to help finance forest preservation in developing countries through a framework agreed upon at the 2015 UN Paris climate summit.

Private businesses are gearing up to capitalize on that funding.

But conservation is happening in other ways too: For example, by a doctor incentivizing conservation with discounted healthcare, and a nonprofit helping villages protect their communities from erosion.