Audric de Campeau pours a glass of mead in the Paris catacombs with his dog, Filou.

Deep below Paris is a web of crypts and tunnels, former quarries that were excavated to build some of Paris’s most famous buildings hundreds of years ago. They’re collectively known as the catacombs.

And somewhere in that network — the exact location will remain a secret — is where Audric de Campeau’s mead is aging.

“We are 20 meters under Paris,” says de Campeau, below the metro, “and absolutely nothing comes to trouble us and my barrels. So it's the perfect place to grow mead.”

Mead, sometimes known as honey wine, is a mix of water and honey that, like wine, must be fermented in a cool, quiet place that is humid and perfectly still. Down in the catacombs, the humidity hovers around 90 percent and the walls and ceiling are damp to the touch.

Mead is the perfect combination of de Campeau’s two passions: Beekeeping and winemaking — which he began experimenting with as a teenager.

“My parents had a house in Champagne,” he explains. “They're not winemakers, but it was a dream as I was thinking, maybe, if I do one or two bottles would be fun.”

His tiny vineyard grew over the years. De Campeau went on to study philosophy at the Sorbonne in Paris but returned to Champagne every weekend to tend his vines and growing garden.

“Then, naturally, I thought about bees. So I asked my parents [for permission] to install my first bee hive,” he says, which posed a problem, “because my father was absolutely allergic to bee venom.” 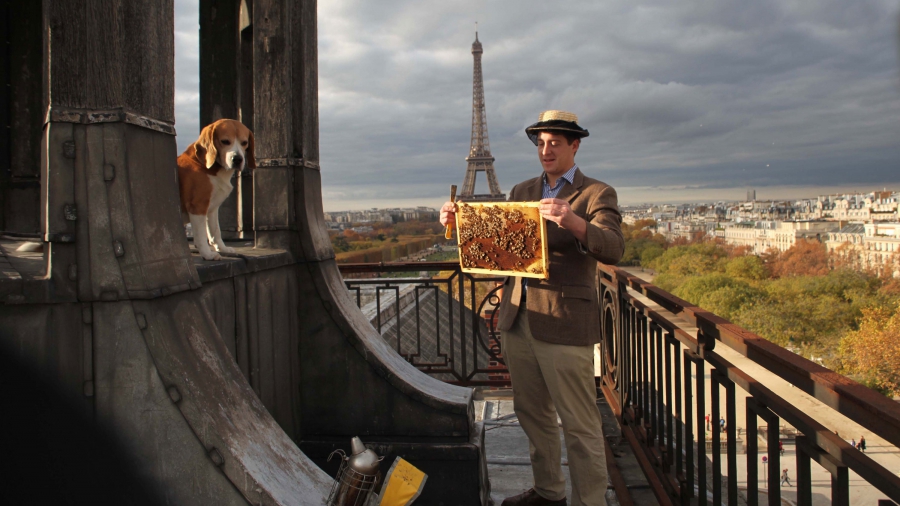 Audric de Campeau and his beagle Filou on the roof of the Ecole Militaire in Paris.

While this might have given others pause, de Campeau persisted, installing his first hive in the woods far from the house. They multiplied while de Campeau, still living in Paris, began dreaming about raising bees in the city.

Beekeeping has something of a tradition in Paris. A beekeeping school has operated in the Luxembourg Gardens for more than 100 years.

But de Campeau, who you can probably tell by now has a bit of a taste for the dramatic, set his sights on a building in his neighborhood, Les Invalides, the site of Napoleon’s tomb. Today, he has hives on many of the best-known monuments in Paris, including the Musee D’Orsay and the Paris mint.

The bees hibernate this time of year. If you disturb the hives, the cold could kill them. But de Campeau shared a video from the roof of a massive 18th century building, the military college.

The honey, which he sells, has become his regular day-job. He’s also experimenting with making honey-based candies and nougat, another sweet French specialty.

“I have other ideas,” de Campeau adds, unsurprisingly. While his next batch of mead slowly ages below the ground, he should have no trouble keeping busy.

Audric de Campeau with his hives on the roof of the Musee d'Orsay, a museum in a converted train station in Paris.