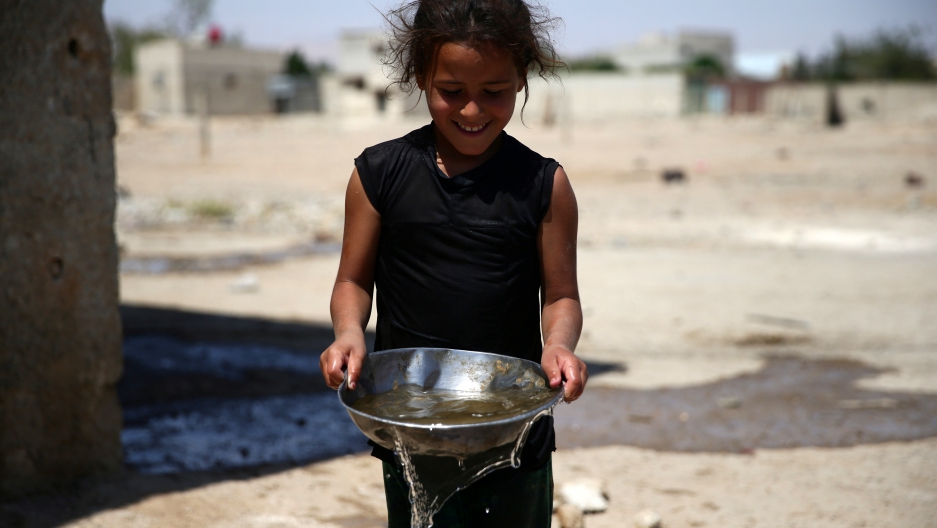 A girl carries a bowl filled with water in the rebel-held besieged town of Douma in eastern Damascus.

In much of Damascus, the water taps are running dry these days.

Water is being rationed throughout Syria's capital city, and it's unclear who is to blame. Despite a proposed ceasefire, the Syrian army escalated its bombing runs in a rebel-held area Thursday, which includes the spring that provides water to much of the capital.

Still, some Damascus residents blame the lack of water on the rebels.

"We woke up in the morning. My mom was trying to make coffee, and she was telling me, 'The water smells funny,'" says a Damascus resident who asked not to use her name. "Then we read the news, and the Syrian authorities issued a statement. We even received some kind of warning from the UN Department for Safety and Security indicating that yes, the water was poisoned using the diesel and other toxic liquid."

The rebels have denied poisoning the water at the city's main source in Wadi Barada. Some local residents there told Reuters that government bombs knocked out the main Ein al Fija water pumping station that helps provide water to much of Damascus.

"On Facebook, rebels are shown booby-trapping the water tunnels, saying that these water tunnels are going to Damascus, we are going to blow them up if they insist to evacuate [rebels] from these villages, or if [government authorities] insist on a reconciliation agreement," says the Damascus resident who asked not to be identified. The rebels "even used a lot of bad words to describe the people of Damascus, saying, 'They were infidels, they deserve to be killed. We have already polluted the water, we are booby-trapping the tunnels, and we are going to blow them up no matter what.'"

The Damascus resident, who is an employee of an international nongovernmental organization, says she supports the Bashar al-Assad government.

"What other option do I have? At least the Syrian army and the Syrian government, they are having a head, they are having institutions," she says. "I am supporting definitely the Syrian army in the fight against terrorism. [They are] bringing back safety and security. There are so many Muslim fundamentalists, Islamic fundamentalists, they don't believe in diversity, they don't believe in hearing other opinions. If you don't agree with them, they will kill you."

Other Syrians challenge that perspective.

Abdul Kafi Alhamdo is an English teacher who was evacuated from Aleppo to the western countryside in mid-December. He has lived in the rebel-held territory for years. He blames Syria's government for destroying his neighborhood and endangering civilians with aerial bombardments. Still, he holds out some small hope for the recently proposed ceasefire.

In the meantime, Alhamdo says his former neighborhood in Aleppo is being systematically looted under the watchful eye of Syrian government soldiers.

"It's like a market. The Assad soldiers and officers, they go to a building, and they sell it as a whole," he says. "By the way, some people went and see their house being stolen, and the soldiers said literally that, 'We freed this neighborhood so everything, every piece [of furniture] in this neighborhood is ours.'"

The latest ceasefire is set to start at midnight Thursday, Dec. 29. Here, read about who it will and won't cover, and why Syria is still far from peace.