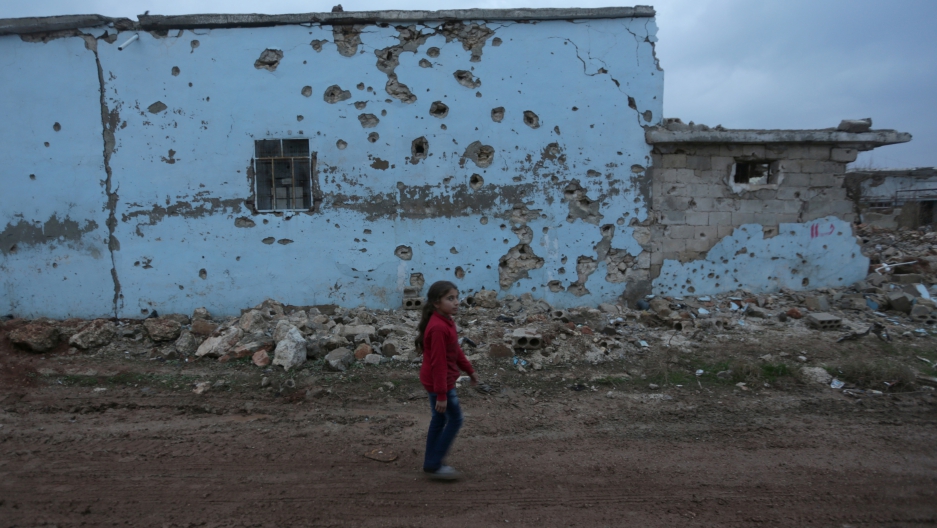 A girl walks near a damaged house in northern Syria, Tuesday. The civil war in Syria is almost six years old.

A ceasefire has been agreed in Syria. But peace is a long way off. Here’s a quick analysis:

A ceasefire is set to come into effect at midnight on Thursday, Dec. 29, between important rebel groups, the government of Bashar al-Assad and his allies, Russia and Iran. The deal was presented by Russia and Turkey, both of which are to “guarantee” the deal, although it’s not clear what that means. Moscow has said three documents have been signed:

These documents have not been made public, but portions have been leaked.

Why has this ceasefire been agreed now, at this point in time?

Everyone is sick and tired of the nearly 6-year-old war. Even the Russians and Iranians are tired of the expense. Russian President Vladimir Putin has already announced a partial drawdown of his forces in Syria.

But the immediate cause of the ceasefire is the crushing military defeat of the rebels in Aleppo. They know they can't come back from this, militarily, and the signals from US President-elect Donald Trump are that he's likely to cut aid, not increase it.

Even more significantly, Turkey appears poised to switch sides: It used to be the main backer of the anti-Assad rebel coalition, and now it seems to have put the rebels on notice that it'll be ending support. So the impulse among the rebels is to get the best deal they can now, as their position can only get worse.

So does this mean "peace in our time"?

No. Syria is far too fractured and there are far too many players to start talking about peace.

There are perhaps 1,000 rebel groups in Syria. Most of these are tiny, independent village militias. It's reported that eight or 13 larger groups have signed on to this ceasefire deal.

Why is there confusion over who’s covered by this ceasefire?

The al-Qaeda offshoot is one wild card. It’s known as the Nusra Front, although technically it was rebranded as Jabhat Fateh al-Sham, after its nominal break with al-Qaeda. Nusra wants to be included in this ceasefire, but the regime says Nusra is definitely excluded.

However, the truce is supposed to cover all districts where the moderate rebels are located, which technically could include most of what I call “Nusra-land.” So one of the key questions here is whether the regime will respect that part of the deal.

The other wild card is whether the "good" rebels will try to cut a deal with the regime on their own, leaving their more radical allies to fend for themselves.

Then, if Nusra is entirely excluded, one can easily imagine a scenario where they turn on the “good” rebels, and demand allegiance or else. This is the Russian dream, a classic case of divide and rule.

Where's the US in all this?

The US has been totally and deliberately excluded. Barack Obama's administration has always refused to put real teeth into its Syria policy, after seeing the US get its fingers burned during the occupation of Iraq.

Still, up till now, the Russians have at least tried to appear to keep the US engaged. But with Trump coming in and signaling that Russia could get a free hand, there seems no need to even bother with a façade of US engagement.

So will the ceasefire hold?

Most analysts agree that the odds are stacked against it. This deal is being presented and "guaranteed" by Russia and Turkey — and not Iran. That does not bode well. Even the Syrian government’s involvement seems to be qualified.

Then, the moderate rebels may decide they can't throw Nusra under the bus, despite government pressure to do so.

On the other side, the regime appears bent on eliminating the last rebel pockets around the capital, Damascus. The city is in the midst of an acute water shortage, so the regime could use the cover of a “humanitarian” operation to obtain the water supplies in those rebel neighborhoods. They're already accusing "terrorists" of poisoning water.

If the ceasefire does hold, what happens next?

The plan is to have peace talks in Astana, the capital of Kazakhstan. Shifting the process to Astana is symbolic, representing a repudiation of the previous US and UN-led efforts in Geneva, Switzerland.

There is no clear political deal on the table, but one possibility being discussed is for each side to be frozen in place, administering their own enclaves, in a loose confederation, somewhat like the Dayton Peace Accord that ended the war in Bosnia-Herzegovina in 1995. Other analysts say the rebels will be lucky to simply get an amnesty. Some rebels have said they're hopeful Assad will be required to leave office, but this seems unlikely given the current balance of power.

One key question is who will represent the rebels. It seems the rebellion’s military men are seeking a powerful voice at the table, since their lives are on the line. That means the civilians who led the Geneva effort could well be marginalized. This would also please the Iranians, who see the rebel "Higher Negotiating Committee," as it's called, as stooges of their regional rival, Saudi Arabia.

There is also talk of Iran, Russia and Turkey creating “spheres of influence” in Syria. It’s not clear what that means or where it could lead, but such divisions rarely end well.

For now, Russia gets to keep its important air and naval bases on Syria, giving Moscow much greater ability to project power in the Mediterranean and beyond. It also would leave Iran and its proxies with a strong presence next to Israel.