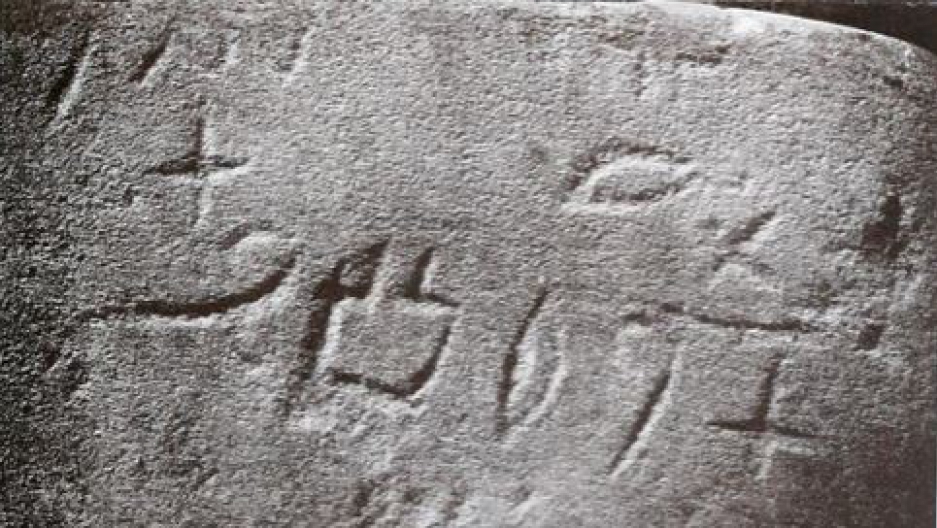 This is a specimen of a deciphered word in the Proto-Sinaitic script, b'lt.

Who invented the alphabet, and why?

First, the hard facts: The earliest evidence of what’s thought to be the world’s first alphabet is a group of 3,500-year-old inscriptions found in Egypt’s Sinai desert — a simplified form of ancient Egyptian hieroglyphics.

Scholars call the alphabet Proto-Sinaitic. The people who invented it, they believe, were educated scribes who knew hieroglyphics and simplified the complicated writing system into a couple dozen letters.

Orly Goldwasser, an Egyptologist at the Hebrew University in Jerusalem, also knows how to read hieroglyphics. And she has a completely different theory.

“It’s only a theory, but no one was able to come up with a better theory,” Goldwasser said, sitting at the kitchen table of her downtown Tel Aviv apartment. 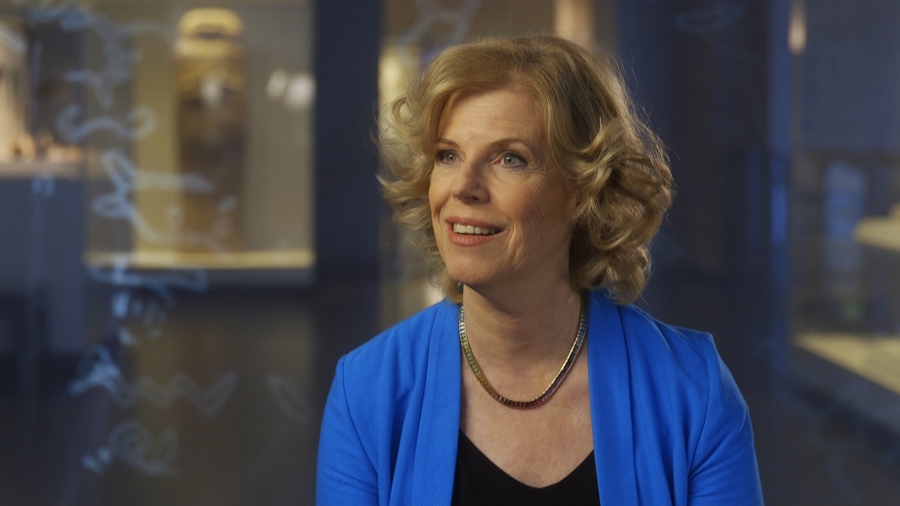 Courtesy of Orly Goldwasser and the Israel Museum

About 30 years ago, when Goldwasser was a young Israeli archaeology student, she went to the Sinai desert to study at Serabit el-Khadem, the site where inscriptions of the first alphabet were discovered in 1905.

She became fascinated. But the more she studied the alphabet over the years, the more she doubted the prevailing theory that elite scribes had invented it.

For one thing, the writing was a mess. The letters were written backward and forward “in complete disorder, in different sizes — in a way that is forbidden to write in Egypt,” Goldwasser said. “In Egypt you have to write all signs going a single direction.”

She took note of some other clues: The inscriptions were found near the site of ancient turquoise mines and an ancient temple covered in hieroglyphics, and they were inscriptions of people’s names and the name of a Canaanite goddess.

Goldwasser’s theory is that illiterate Canaanite miners working in the turquoise mines were the ones who invented the first alphabet, so they could inscribe their names as a dedication to the goddess.

“The mines were dark and very narrow. It’s an unpleasant situation. You have to pray a lot to get out in good shape from this situation. You’re isolated. You are in a place with thousands of beautiful hieroglyphs. And you want so much to write your gods’ [names] and write your name,” she said.

Goldwasser believes these miners looked at the hieroglyphic symbols carved onto the walls of the temple close to the mines and adapted them for their alphabet.

“You can see also how they invented everything. They looked at something and said, ‘Oh my God, what is it? This looks like a house. OK. "House" in Canaanite is bayit. So we take it and this will be beh — the equivalent of the letter B.'"

Goldwasser’s theory got its first museum endorsement this year in an exhibit at the Israel Museum in Jerusalem.

However, she still hasn’t convinced most scholars that the inventors of the alphabet were illiterate.

“I think that’s a contradiction in terms,” said Aaron Demsky, a scholar who studies the spread of literacy in the ancient world and who participated in a recent conference on the origins of the alphabet at the Polis Institute in Jerusalem.

Demsky subscribes to the scholarly consensus that the alphabet’s inventors were likely “a coterie of scribes who could make the intellectual leap of discovering one of the greatest discoveries in history, of creating a writing system simplified into 27 to 30 signs. This is a great invention. This cannot be attributed to illiterate miners, under no circumstances.”

He believes the Proto-Sinaitic inscriptions found near the ancient mines were left not by the inventors of the alphabet, but by Canaanite turquoise traders who already knew the alphabet from elsewhere; they came to the mines, got their turquoise, wrote dedications to their goddess, and left.

“They were traders. They had an elementary knowledge of the alphabet. True,” Demsky said. “But they didn’t invent the alphabet.”

Goldwasser has some counterarguments to that: She believes there are features of the Proto-Sinaitic alphabet that suggest the alphabet was invented in the place the inscriptions were found, and that the inventors couldn’t have known the meaning of the hieroglyphics they were adapting.

But it’s just a theory, she acknowledges.

“If someone comes and says, ‘Orly, it’s incorrect, they were real scribes,’ I will accept it, but I will be sad,” Goldwasser said. “I like so much my miners, and the idea that they were not an elite society, they were not the privileged one of their times, and still they were able to emerge from all that with a fantastic innovation that changed the world until today.”

No matter who invented the first alphabet, scholars do agree that all of the world’s alphabets today stem from it.

The capital letter A is an ox head turned upside down, resting on his horns, Goldwasser said. That "ox," or aluf in Canaanite, became the Greek letter Alpha, and the Latin letter A.

In other words, English speakers are still writing a permutation of ancient Egyptian hieroglyphics — which all scholars can agree is mind-blowingly cool.