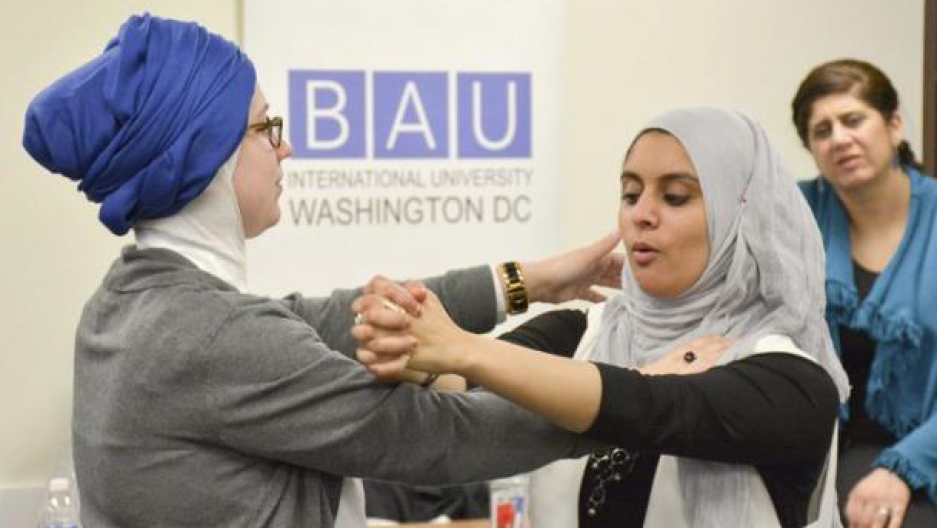 Rana Abdelhamid (C) demonstrates a move to a student during a self-defense workshop designed for Muslim women in Washington, DC, in March.

Rana Abdelhamid was just 15, walking to a volunteer job in Queens, New York, when a man came up behind her and tried to yank off her headscarf, or hijab.

“I just remember he was taller than me because I remember him hovering over me,” she says, “and he was wearing almost like a bomber jacket.”

What he couldn’t have known was that his 5-foot-1 target was a black belt in Shotokan karate. Abdelhamid pivoted to face her attacker, deflected his grab, and was able to escape unharmed — physically at least.

“The look he had in his eyes and the hate he was carrying towards me was something that followed me around for a long time,” she says.

But the incident also gave her an idea. She began knocking on the doors of mosques, offering self-defense classes for Muslim women. Eventually she founded the Women’s Initiative for Self-Empowerment, WISE, which has offered classes in seven cities. More than 1,000 women have signed up.

Today, demand for the classes is surging. Anti-Muslim hate crimes in the United States posted a 67 percent increase in 2015, according to the FBI. And experts and advocates say divisive rhetoric during the presidential campaign added fuel.

In the days following the election, a man reportedly threatened to cut the throat of an off-duty police officer in New York who was wearing a hijab. In California, a college student said she struggled to breathe when an attacker grabbed her hijab from behind.

“I remember the day after [the election], I didn’t feel comfortable taking public transportation, to be honest. I would take a lot of Ubers,” Abdelhamid says. “And then when I was in New York I would wear my hijab differently so it looks more fashion-y, less Muslim.”

Concern that an attacker might target Muslim women for wearing a hijab is one of the reasons women come to this self-defense class. Abdelhamid’s team at WISE has devised three techniques for deflecting a “hijab grab,” depending on whether an attacker approaches from behind, the side, or the front.

Abdelhamid tells women to tuck their chin if they’re attacked, to avoid the scarf tightening around their neck, choking them.

Women are often pressured to be soft-spoken, says Pallavi Mittal, an instructor at a recent self-defense class for Muslim women in Washington, DC. When they need to draw attention to themselves, sometimes their voices fail them.

“Even when our instincts are telling us that it’s not a safe environment, or there’s something like the heebie-jeebies. We often still are in that socially conditioned mode,” Mittal says. “It’s really important to use your voice and be heard ... to shout, and say clearly, ‘No.'”

In a chilly church basement under fluorescent lights, Mittal coaches a dozen students on kicks, elbow jabs and strikes. She volunteers her time, and the class is free.

Some students wear street clothes, some sweats, and some hijabs.

“I’m not fearful for myself. I am for my children,” says Mirriam Shah, who brought her two daughters, 4 and 12, to the class. “I want them to experience the America that I love.”

Shah says she’d like to help her daughters face the world head-on. And she says her faith offers a few role models.

“Hadija, Zaineb, Fatima,” she says, listing several. “Look up those women. They are fierce, they are strong. They were not in the shadows. They did not take a step back. They were diplomats. They were revolutionaries.”

Instructional self-defense videos are also cropping up online. One of them, featuring a Chicago-based Muslim woman, Zaineb Abdulla, has had more than 3.7 million views.

“Besides these techniques, I think the most important thing these women should be able to take away from these classes is just their own power,” Abdelhamid says. “Both their agency over their voice, [and] their body.”

This story was produced in collaboration with Interfaith Voices.