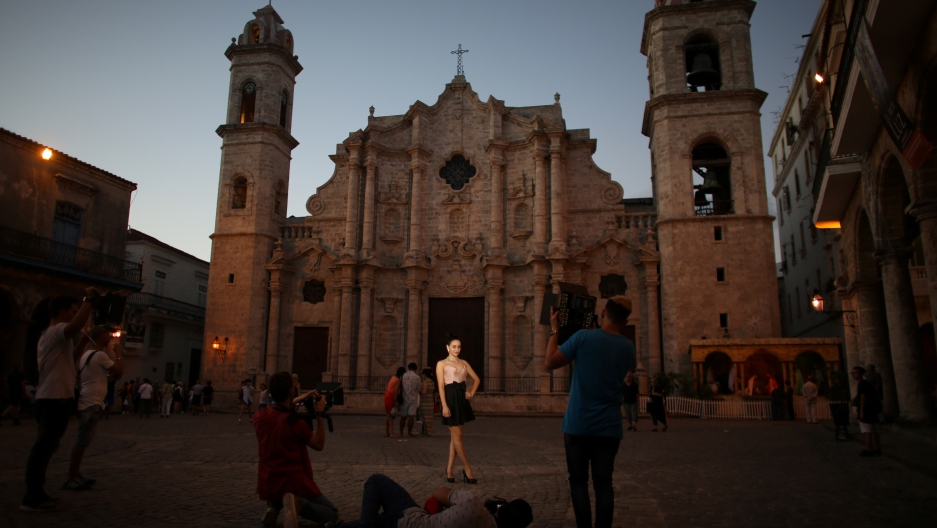 Yazuli Lloret, 15, poses for a photographer at the Cathedral Square in Havana, Cuba, December 27, 2016.

Cuba. The four-letter word carries a lot of meaning here in the United States: Communism. Exile. Cigars. Rum. For the Kennedy administration, it probably just meant ... a four-letter word.

But for many others countries, Cuba means something different. To understand it, all you have to do is change the lens through which you view the country.

Remove the US and a whole different island appears.

That’s what Joshua Jelly-Schapiro does with Cuba and other Caribbean nations in his new book, “Island People: The Caribbean and the World."

The book offers a different picture of the region than US history commonly presents. Just take the Cuban revolution: Other countries in the Caribbean view it with longing.

“You know, it’s an incredibly alluring story,” says Jelly-Schapiro. “This idea that in Latin America this revolution could happen and people could say, you know, ‘We are going to decide on this island what we want to do here. And the empires are not going to [do] so.’”

Throughout the book, the author continues to reorient perceptions of the island. He reminds the reader that other Caribbean nations view Cuba with respect. “In the 1960s and '70s, Cuba was sending doctors and was helping build schools,” he says. “Cuba was looked at, sort of, if not a role model, then certainly as a place [that] exemplified ways of not following the sort of dictates of the Empire, which is to say, the United States. So there are ways in which Cuba is admired in the region that we do not hear about in the news in this country.”

Jelly-Schapiro says it’s important to know a country like Cuba as something more than a place apart.

“The thing about Cuba and Cuban culture is that it is actually at the heart of American culture. I mean, we think about rock and roll (“Louie, Louie!”), bits of this music really came from Cuba,” he says. “Cuba has been feeding America and American culture for a very long time. And we’ve been deeply connected to Havana. So it’s my hope that we acknowledge those cultural links and that legacy of friendship.”