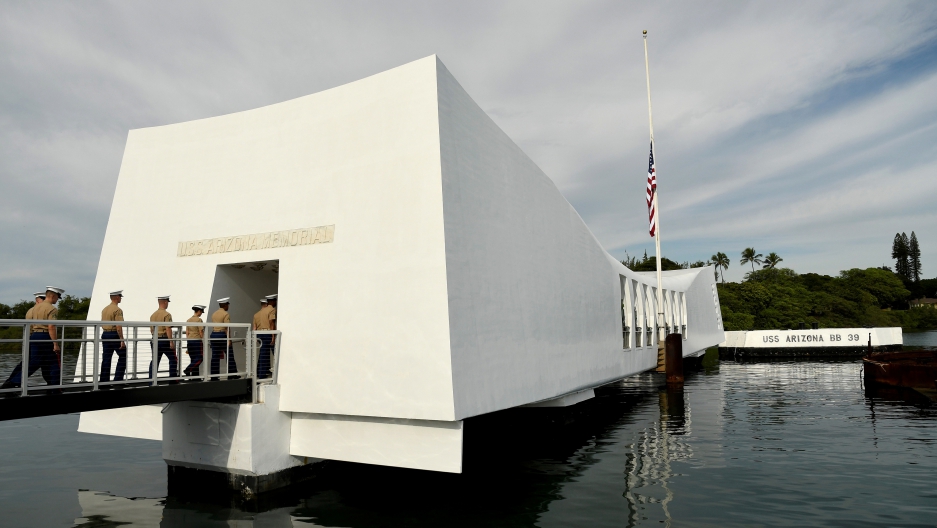 US Marines walk onto the USS Arizona memorial during the 75th anniversary of the attack on Pearl Harbor in Honolulu, Hawaii, December 7, 2016.

Japanese Prime Minister Shinzo Abe and US President Barack Obama made a joint pilgrimage to the site of the Pearl Harbor attack on Tuesday to celebrate "the power of reconciliation."

The Japanese attack on an unsuspecting US fleet moored at Pearl Harbor turned the Pacific into a cauldron of conflict — more than 2,400 were killed at Pearl Harbor, drawing a reluctant America was drawn into World War II.

Abe is not the first Japanese leader to visit Hawaii since the war to pay homage, but he has invested poignant symbolism in choosing to see the wreck of the USS Arizona, which lost 1,177 crew members.

The meeting between the two leaders comes as Obama prepares to leave office and with Abe leading Japan into uncharted waters, after remarks by incoming US president Donald Trump clouded US-Japanese relations.

The US president-elect has declared his opposition to the Trans-Pacific Partnership, effectively killing a major trade deal that Obama championed and that Abe put at the heart of his economic strategy.

And, at least on the campaign trail, Trump has also called into question the US security guarantees that shielded Japan through the Cold War and later through the rise of an increasingly confident China.

The two leaders were to hold their last bilateral meeting in the morning before heading by boat to the white-walled memorial positioned over the sunken Arizona, still lying in the clear blue waters of the harbor.

But he and Abe have chosen a telling spot to celebrate US-Japanese partnership, 75 years after the notorious "day of infamy," December 7, 1941.

In 1956, then prime minister Ichiro Hatoyama visited the headquarters of the United States Pacific Command in Honolulu, which fronts onto Pearl Harbor.

And Abe's grandfather, Prime Minister Nobusuke Kishi, also did so in 1957.

But Japan's government says Abe's visit is the first by a sitting prime minister to the Arizona Memorial to console the spirits of the dead.

It is also the first time that a sitting Japanese prime minister has been joined at the memorial by a US president.

A reluctant America was drawn into the war already raging in Europe and its colonies, a war that ended after US atom bombs razed the Japanese cities of Hiroshima and Nagasaki.

Post-war cooperation, however, has healed many wounds.

Only five of the Arizona's crewmen are still alive and, while the memorial remains a tourist draw, in Hawaii the divisions of war have given way to a shared present.

"I don't think there is any feeling of antipathy towards the Japanese, 75 years after the attack."

Today, Obama's home state has a reputation as one of the most multi-ethnic and multi-cultural in the country.

December is peak tourist season in balmy Hawaii, and the US First Family is halfway through its annual Christmas break on the islands.

But the scene was grim in 1941 when Admiral Isoroku Yamamoto maneuvered six aircraft carriers to within 240 miles of Oahu and unleashed two waves of dive bombers.

The US Pacific fleet, formerly Japan's main rival in the region, lost 21 warships and 328 planes.

Hundreds of sailors drowned when the USS Oklahoma, still lashed to the quay, pitched onto its side and trapped them.

Before the attack, the US isolationist campaign's cry of "America first!" — now revived as Trump's slogan — found a ready ear among voters wary of embroilment in Europe.

The "America first!" slogan was quickly replaced on posters, in political speeches and in song by recruiters' refrain: "Remember Pearl Harbor."

Three-quarters of a century later, Abe wants to imbue the wartime rallying cry with a new resonance.

"The peoples of Japan and the United States were put in position to hate each other," he said.

"I hope the image of President Obama and I together visiting Pearl Harbor will serve to make the term 'Remember Pearl Harbor' symbolize the power of reconciliation."

The same force of reconciliation was on show in May, when Obama surveyed ruins in Hiroshima and revived his Nobel Peace Prize-winning call for a world without nuclear weapons.

Trump, who takes office on January 20, was forced to backtrack during his campaign after he appeared to suggest Japan break a taboo and develop its own nuclear weapons.