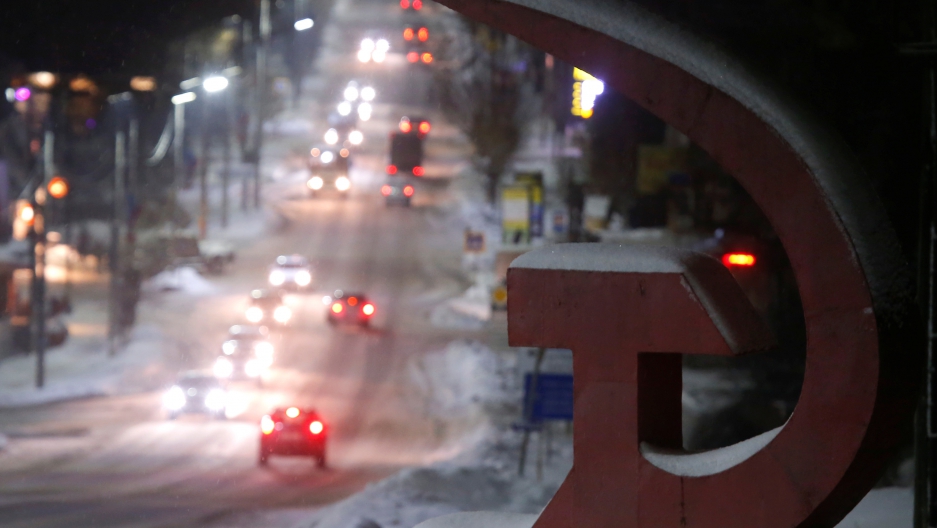 Vehicles drive past a monument covered with snow and forming a sickle and a hammer, which were displayed on the coat of arms of the Soviet Union, in the town of Pereslavl-Zalessky, Russia, November 14, 2016.

For all the Western media's attention on the 25th anniversary of the end of the Soviet Union, most Russians met the occasion with a collective shrug.

Because while few would deny the symbolic significance of the Soviet hammer and sickle flag for the final time, the moment felt more whimper than bang.

"Frankly speaking, I have no memory of that day," says Max Krivosheyev, a friend of mine who was a 17-year-old university student in Moscow at the time. "I didn't feel like something out of the ordinary was happening ... because the Soviet Union was already gone."

What Krovsheyev does remember is the ensuing post-Soviet ride under Russia's first president, Boris Yeltsin.

Economic reforms known as "shock therapy," exhilarating revelations about Soviet repressions and Stalinist crimes, and change. All around him.

There were new books and newspapers; new political parties and civil society groups, and there were the "New Russians" — a class of businesspeople with endeavors big and small. Opportunity everywhere, for those who could ride the wave.

"Those who understood what was going on, truly what was going on ... for them, it was the best time," says Krivosheyev. "Because you had nothing and all [of a] sudden the whole world was right in front of you. Like with a snap of somebody's fingers. It was unbelievable."

But the gains of the Yeltsin 1990s also brought decay. There were multiple bank defaults, millions in average Russians' savings lost, a gangster-style business culture, and the vaunted Red Army reduced to a punchline.

Overwhelmed with the scope of the changes underway, Yeltsin told Russia's regions to "take as much freedom as you need." Soon, wars for independence in Chechnya would test the sustainability of the new Russian Federation itself.

Was it a time of great democratic freedom? A time of gangster capitalism? A period of national decline? In reality, it was all of the above and then some. Personal experience dictated attitudes. In the post-Soviet space, there was no one singular story.

But certainly it was a time for personal reinvention. Talk to anyone from that period, and they will regale you with stories of shifting professions, multiple political dalliances, fortunes won and, more often, lost.

Indeed, it could seem as though the norms of daily life were suddenly rendered meaningless.

Teenagers could suddenly earn more — much, much more — than the parents who raised them. Friends who grew up in those years recall the exhilaration — and shame — at bringing home paychecks far beyond their parents' wildest dreams.

Should people selling T-shirts on the street really earn more than doctors? Teachers? Scientists ? Career military officers? The fact is they did. In the new Russia, adaptability reigned.

Take Russian President Vladimir Putin. A career KGB agent in the Soviet period, Putin emerged in the 1990s as a trusted aide to St. Petersburg mayor Anatoly Sobchak, among the leading liberal democratic voices of his time. The position would help land him a job with the Kremlin, and — seemingly out of nowhere — propel him to Yeltsin's choice for prime minister and chosen successor.

Putin's rise remains but one example of the strange miracles post-Soviet society could muster.

The dark side of progress

But the new Russia could take away more easily it gave — a lesson learned by many.

Reared by years of economic and political turmoil, Russians I know tend to live for the moment, spend money they have — rather save for a rainy day. Too many had learned that currencies collapse; that banks can shutter in a day with personal savings swallowed whole.

It helps explain Russians' relative ambivalence to Western sanctions over Russia's annexation of Crimea. No one enjoys seeing their currency — and paychecks — shrink by half. Who would? But Russians have seen worse, far worse, in recent history. Memories of the deprivation of the early Yeltsin years runs deep in the collective memory.

Indeed, harnessing Russian feelings of humiliation from that period has been one of the driving forces of the Putin years, says Maria Lipman, a Moscow-based journalist and editor of Counterpoint Journal.

"I think this is one of the secrets of [Putin's] popularity: It was his personal humiliation as well as the humiliation of his countrymen," she says. "So he knows how to play on these sentiments."

It's often mentioned Putin has called the collapse of the Soviet Union "the greatest geopolitical catastrophe" of the 20th century. But that’s only half the story. Putin’s mission is now to restore Russian prestige — what foreign policy analyst Vladimir Frolov calls “making Russians feel good about themselves again.”

It's clear that Putin sees foreign adventures as providing the roadmap.

Russia, through its intervention in the Syrian conflict, has re-established itself as a player in the Middle East. Through its annexation of Crimea, the Kremlin has re-established its zone of influence over neighboring post-Soviet states. Increasingly, Putin's authoritarian-tinged from of conservatism is challenging Western liberal democracies in Europe.

Finally, there is Donald Trump. Whatever happens to US-Russian relations going forward, the Kremlin sees Trump as giving Russia the respect it feels it deserves.

For a new generation of Russians, there comes with it a sense of Russia's rising influence.

"I think somehow we're getting to a better position in the world. It gives me the feeling that if they're still feeling our power," says Anna Pogreevenkova, a schoolteacher in Moscow. "And I'm happy that we have a strong president."

Whetter you share her enthusiasm, it's clear that Pogreevenkova and other Russians see their post-Cold War story as too quickly written. The entire Putin phenomenon, a demand for revision.