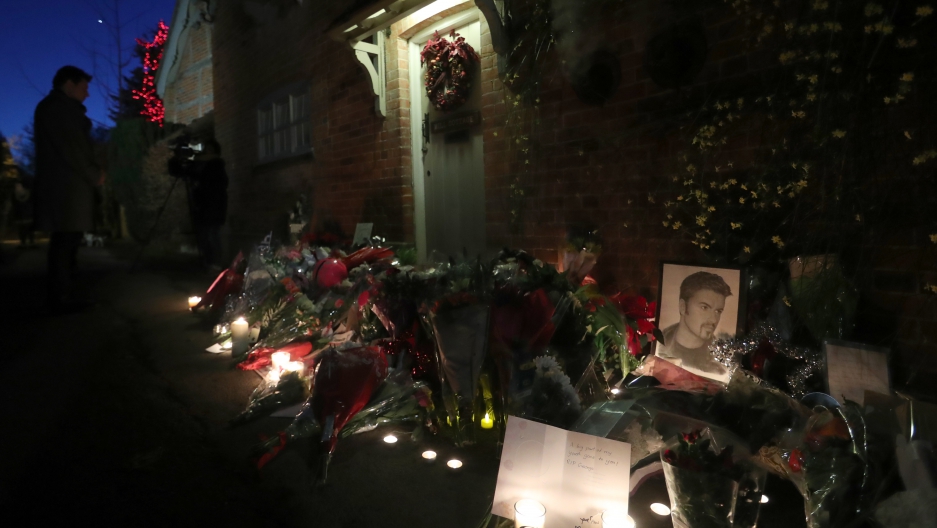 Candlelit tributes are seen outside the house of singer George Michael, where he died on Christmas Day, in Goring, southern England on December 26, 2016.

Tributes came from around the music world and tearful fans on Monday after British pop superstar George Michael, who rose to fame with a string of smash hits including "Last Christmas," died aged 53.

Michael died of apparent heart failure on Christmas Day at his home in Goring, a village on the River Thames in Oxfordshire, west of London, after an award-winning career spanning more than three decades.

Fans placed bouquets of flowers, single roses and emotional messages outside the house, as well as on the pavement in front of his luxurious London home.

"He died so young!" said Karen Walkden, 52, who brought a message to the large red-brick mansion in Highgate in north London.

"It was my generation, it's absolutely shocking," said Walkden, who came from nearby Finchley to the posh neighborhood adjoining Hampstead Heath.

"Everybody who's been important to me has been ripped away this year — David Bowie, Victoria Wood," Walkden added, referring to the late rock legend and a much-loved British comedian who both died in 2016.

Also: Prince and David Bowie helped me find my place in America

"You have been loved, you were loved, you will be loved. We grew up with you and you spoke for us," read one note outside the Highgate house.

"Shocked and sad... He was a great talent, person and community member," read another note stuck to a yellow bucket containing a plant of small pink roses.

Mags Sorrell, 60, said she had seen Michael in concert around a dozen times.

"On the stage, he looked at his happiest," she said. 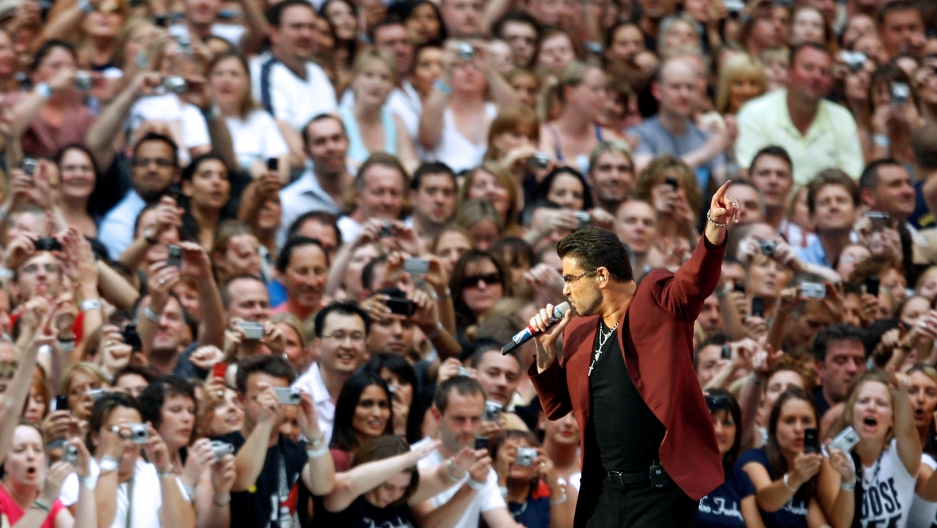 Leandros Kalisperas, 39, who said that he like Michael was of a Greek Cypriot background from north London, brought flowers, a candle and a note.

"He shaped my life," he said, wiping away a tear. "For me there was no one else that can take us to that high, joyous place."

Big names in entertainment like Elton John and Madonna hailed Michael's talent and human qualities, while former Wham! bandmate Andrew Ridgeley said he was "heartbroken at the loss of my beloved friend."

He won a string of awards including two Grammys and three Brits, but run-ins with the law over drugs and a series of bizarre incidents and health scares in his final years often overshadowed his music.

Police said they would be conducting a post-mortem examination and were treating the death as "unexplained but not suspicious."

His manager Michael Lippman told Billboard magazine that the cause of the star's death was heart failure.

Lippman said he was told that Michael was found "in bed, lying peacefully."

Michael was due to release a documentary about his life and a new album in 2017. His last album "Symphonica" (2014) rose to number one in the charts.

Michael was born Georgios Kyriacos Panayiotou to a Greek Cypriot father and English mother in north London in 1963.

He met Ridgeley at high school and the pair went on to form Wham! in 1981.

With their good looks, perma-tans, highlighted hair and hedonistic image, the duo captured the go-getting spirit of the age and fast became one of Britain's biggest pop acts.

In 1985, Wham! became the first Western pop band to perform in China as the country was slowly beginning to open up to the outside world.

Peter Tatchell is a British human rights campaigner who has fought for LGBT rights. He met the singer in about 1980 when Michael was a teenager. "It was a chance meeting in a small, gay disco in the suburbs of north London," he said. Then, Michael was already a great dancer and singer.

Following years of speculation over his sexuality, Michael came out as gay in his mid-30s, in 1998, after being arrested for committing a lewd act in the public toilet of a Los Angeles park.

At the time, he told CNN, "I spent the first half of my career being accused of being gay... so I spent my years growing up being told what my sexuality was, really. Then by the time I kind of worked out what it was, and I stopped having relationships with women, I was just so indignant at the way I had been treated until then."

He came out as gay for the first time on that program. We were in the midst of the AIDS crisis and stigma was high for gay people. That was also year the American sitcom Will & Grace went on the air, which featured a gay lead character. When Michael came out, it was still rare though for celebrities to be open about their sexuality.

"He turned his arrest into something positive. He used it as a peg to come out and do so in a very defiant way," said Tatchell. "But of course, many of us wish that he had come out way back in the 1980s when it was really needed... though I understand entirely the reasons why he didn't."

Tatchell said that Michael was very active in helping with AIDS organizations later in his life.

"He was a star with a social conscience," he says.

With additional reporting by Nina Porzucki.