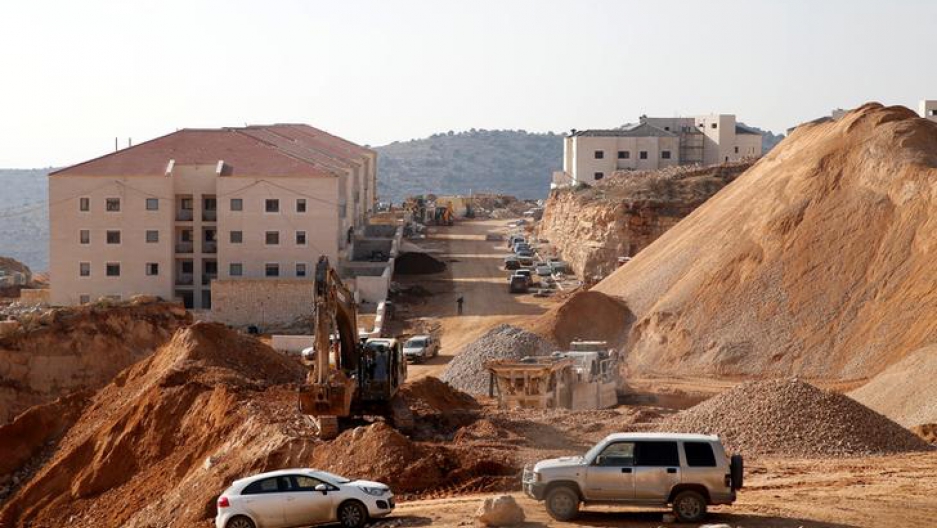 A construction site is seen in the Israeli settlement of Beitar Ilit, in the West Bank, December 22, 2016.

Israel's settlements in territory that would eventually make up an independent Palestinian state have long been controversial — and its policy was formally criticized at the UN just last week.

The US abstained from the vote but refused to veto the measure as the US delegation had done many times before.

Israeli Prime Minister Benjamin Netanyahu's response? He called the UN vote a "shameful ambush" by the Obama administration, and he said he is looking forward to working with his "friend," President-elect Donald Trump. Trump was also critical of the UN vote. He wrote on Twitter that it "will make it much harder to negotiate peace," adding, "we will get it done anyway."

Back in Israel, Netanyahu reportedly summoned the ambassadors of the countries currently on the UN Security Council to denounce them for supporting the resolution.

“I think he was very clear that he was very angry about this,” says Nahal Toosi, a foreign affairs correspondent at POLITICO. “[Netanyahu is] looking at ways to punish some of the countries, perhaps by cutting off trade or other types of relations. It's hard to say how far this will go or how long it will last, but this is a very, very sensitive issue. It's about one of the most sensitive issues in the Israeli-Palestinian conflict, this issue of settlements. So this is something that he is not going to let go of for quite a while."

The construction of settlements has been up dramatically since 2011, the last time the US vetoed a resolution on Israeli expansion at the UN Security Council. That trend, says Toosi, may have pushed Washington to take a stand.

“The fact that there has been so much more settlement actually in the West Bank and in east Jerusalem, which is disputed territory under international law, is one of the reasons the US said that they decided to abstain on this vote. They felt like, if they were to veto it, that the settlement activity would keep going on, and it would really put the whole idea of a two-state solution at risk.”

The US move can be viewed in another light as well: It reflects the poor state of relations between Netanyahu and President Barack Obama.

“Perhaps this was just the situation where Obama thought, ‘You know what, sometimes you have to tell your friends what they're doing is not good for them’ — and that's his point of view — and so he decided this time let's just abstain and let this resolution go through," Toosi says. "That will send a signal that we are serious about a two-state solution, since we don't know if Netanyahu really is.”

Many Middle East observers believe, in the long term, there has to be a Palestinian state — they can’t live under occupation forever. And that's been US policy as well. But Trump has chosen David Friedman, a man who is on record saying he doesn't want to recognize the rights of Palestinians, as his next ambassador to Israel.

Friedman is an orthodox Jewish attorney who has a long history of supporting settlements and other policies that many on the Jewish left would disagree with, says Toosi.

For instance, Friedman has said he wants to move the Embassy of the United States from Tel Aviv to Jerusalem — which Trump has also said he wants to do. “That would infuriate a lot of people, especially in the Arab world, because they view Jerusalem as a contested city,” Toosi says.

In recent years, a number of Middle East issues, including the Iran nuclear deal and the war in Syria, have pushed the quest for an Israeli-Palestinian peace deal to the back burner.

“Perhaps this is going to make things harder, true, but it actually brings attention back to the Isreali-Palestinian issue," Toosi says. "Whether there's going to be a solution, I don't know about that. But it does actually remind people that, hey, this crisis is still out there."