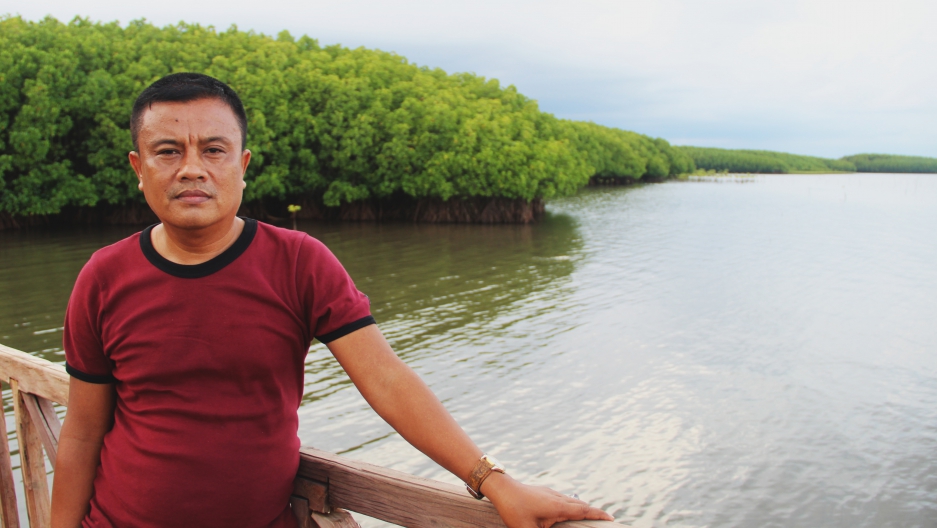 Hidayat Palaloi, founder of the Indonesian Self Growth Foundation, has been helping communities replant mangroves in the Indonesian province of South Sulawesi for more than two decades.

There’s a spot in the Indonesian seaside village of Tongke-Tongke where people like to hang out at sunset.

It’s a boardwalk winding through a dense forest of mangroves along the coast. The tangled root systems of the trees poke out of the water, like tent poles holding up the tree trunks.

Teenagers in this town of roughly 3,000 people take selfies with the dense leafy canopy as a backdrop, while families stroll along the boardwalk.

None of this may have been here if it weren’t for Hidayat Palaloi.

“Before, this area was not like this, it was just empty land, coastline and a beach,” says Palaloi, the head of a mid-sized conservation nonprofit based in Makassar, Indonesia, called the Indonesian Self Growth Foundation. 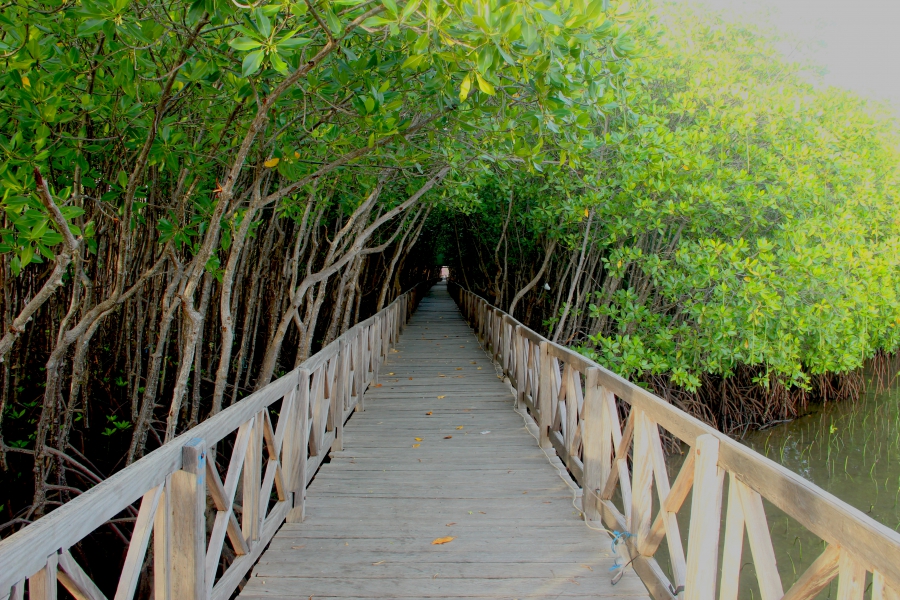 A boardwalk cuts through a mangrove forest in the village of Tongke-Tongke, in South Sulawesi, Indonesia.

Without the natural wave protection offered by the mangroves, the coastline in Tongke-Tongke was being eroded.

“The erosion was constant,” Palaloi says. “People say some houses on the coastline disappeared and people had to move inland.”

Now, there are miles of mangroves that protect the village here. That’s partly thanks to Palaloi, who’s been helping towns like Tongke-Tongke plant mangroves on the island of Sulawesi for more than two decades.

The somewhat stern 51-year-old’s motivation comes from a childhood tinged with tragedy.

Palaloi grew up about 150 miles up the coast from Tongke-Tongke, in another coastal village in the province of South Sulawesi.

Palaloi’s family raised fish in ponds. But eventually, because mangrove forests had been torn down to make way for aquaculture in the village, erosion ate away at the coast until the ponds were enveloped by the sea.

“For my family, these fish ponds were the main income, and when they failed, our income was gone,” Palaloi says. “My family tried to get other work, but it wasn’t enough.”

A long history of mangrove removal

In the 1980s and '90s, the Indonesian government backed the large-scale conversion of mangroves into ponds for raising fish and shrimp in what was called the “blue revolution.”

This aquaculture strategy is part of the reason why the country has lost 40 percent of its mangroves in the past three decades. The sprawling island nation of Indonesia still has about a quarter of the world's mangrove forests, but they’re disappearing faster there than anywhere else. 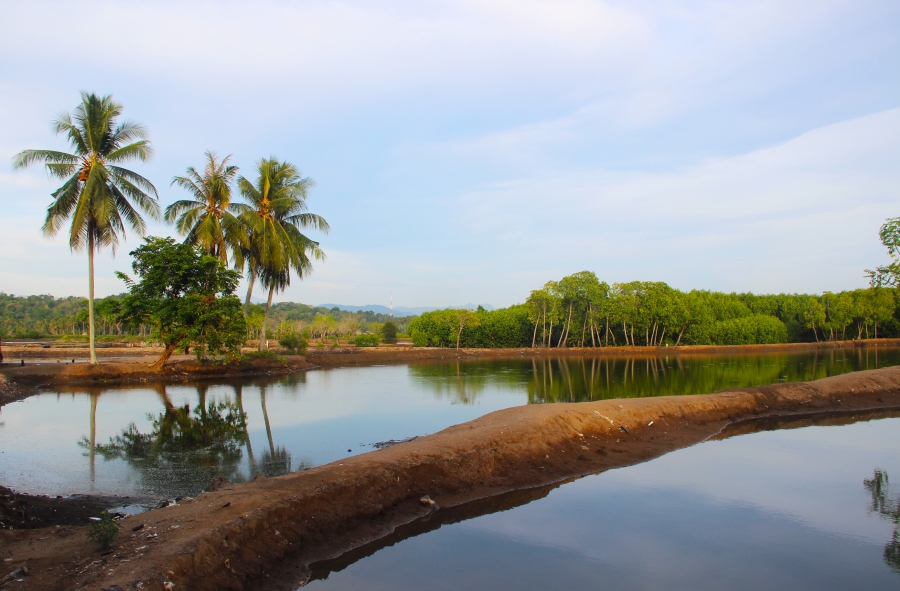 The conversion of mangrove forests to aquaculture ponds like this one in Tongke-Tongke has accelerated erosion on the Indonesian coastline.

After many of Indonesia’s mangroves were stripped away, erosion hit coastal communities hard.

“I saw for myself how erosion hurts people, and I knew I didn’t want to see another community experience what mine did,” Palaloi says. “So that’s why I started doing this [conservation] work.”

In the 1980s, Tongke-Tongke was starting to look a lot like Palaloi’s hometown.

"The floods happened from January until April,” says Tongke-Tongke resident Saenuden, who lived not far from the coast in the 1980s.

“Every day, the water came into the house almost two feet above the floor,” Saenuden says. “It was uncomfortable, to say the least.”

Saenuden and other villagers started planting mangrove seedlings in tidal zones, but there was infighting among the different conservation groups and fishermen, and people threatened to chop the trees down for firewood.

Palaloi stepped in to mediate in the late '90s. He and two of his staffers lived in Tongke-Tongke for years, staying with local residents on a rotational basis to build alliances with residents all over town.

Palaloi successfully politicked enough to get community members working together, helping them to create a master plan for their village and expand their mangrove planting efforts.

“I think if he didn’t help us to resolve the conflict, I’m not sure that this mangrove forest would be here now,” Saenuden says.

Palaloi’s method is to tap local leaders like Saenuden to plant mangroves and then monitor the health of the trees. He sees his role as enabling community members to envision and complete their own projects, rather than dictating what communities should do.

He’s spread the gospel of mangroves to roughly 20 different communities around South Sulawesi. 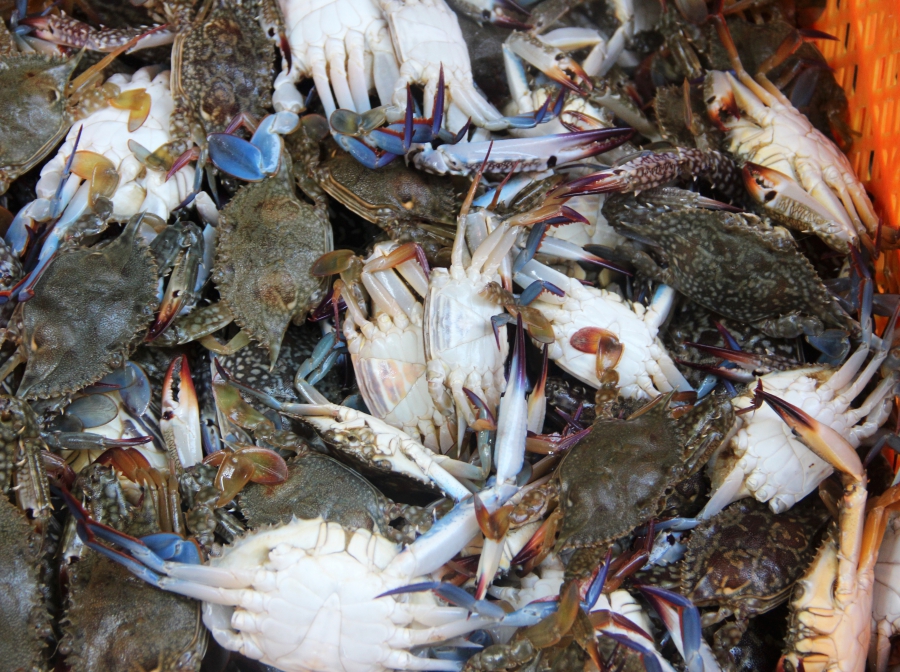 In the communities where he works, Palaloi stresses the economic advantages of mangrove restoration projects, including higher crab and fish yields.

Selling the economic advantages of mangroves

Palaloi recruited a crab fisherman named Bachtiar to lead mangrove planting in an industrial area on the outskirts of the city of Makassar about eight years ago.

The protected waters around mangrove roots serve as excellent nurseries for one type of crab harvested in the region.

“After we planted all the mangroves, our business started to grow,” Bachtiar says. “One person can catch about 10 kilograms per day. Before, you could just catch one or two kilograms.”

Bachtiar has opened a crab processing facility since the mangrove project launched. The day I visited he was buying crabs from local fishermen, and about a dozen women were picking the meat out of the shells of cooked crabs to pack them for freezing and shipment.

Bachtiar says telling his neighbors that mangroves are good for business was key in getting them to help plant and maintain the coastal trees.

“Almost all of the people around here are crab farmers,” Bachtiar says. “So there are economic and also conservation motivations to continue this project.” 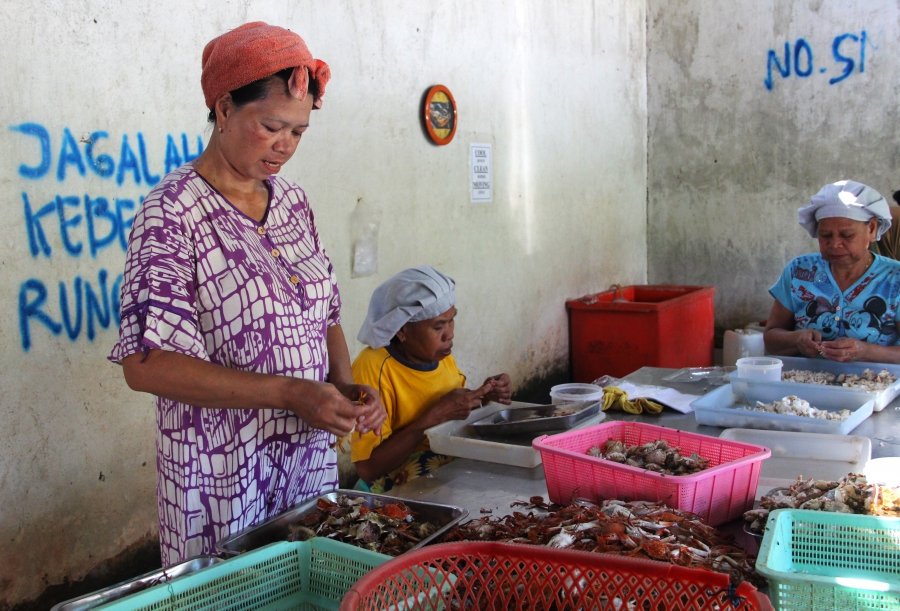 Crab pickers at a processing facility on the outskirts of Makassar, South Sulawesi, Indonesia.

Palaloi pitches mangrove projects based on their economic benefits in most of the villages where he works, just like he did outside of Makassar. In Tongke-Tongke, villagers have a co-op to grow and sell mangrove seedlings to other villages looking to emulate their success.

“Otherwise they wouldn’t put in the work to maintain the mangroves.”

Many planting efforts marred by failure and wasted resources

After the Indonesian government supported the destruction of mangrove forests during the “blue revolution,” it has since reversed its course and now spends millions of dollars a year trying to replant them.

“The Ministry of Forestry spends around $13 million a year planting mangroves in every coastal district in Indonesia,” says Ben Brown, Indonesian mangrove expert and co-founder of Blue Forests, a nonprofit that focuses on building resilience in coastal areas. 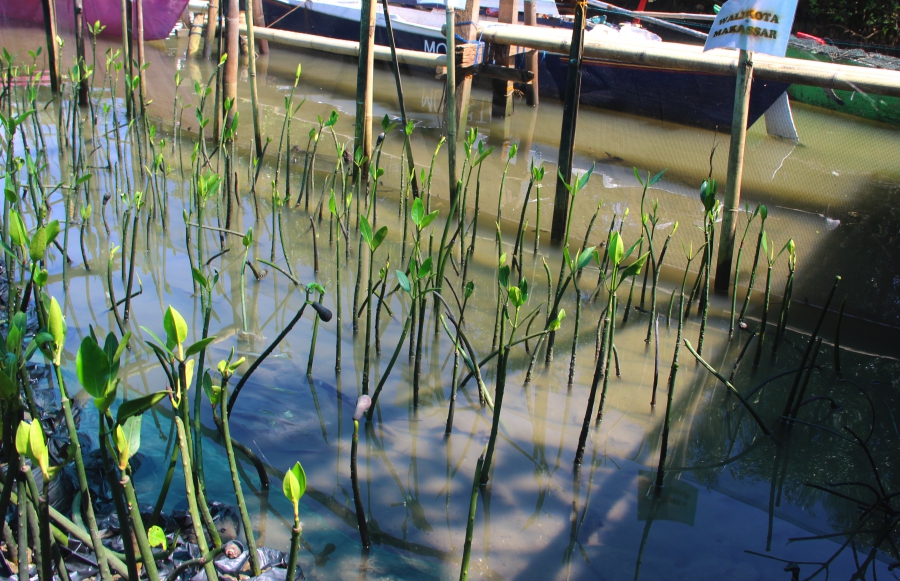 Mangrove seedlings grow in a nursery outside of Makassar, Indonesia.

Brown says most of that money is going to waste. His data suggest the vast majority of the mangroves planted by the ministry die. And they’re not the only ones. Mangrove restoration projects led by other government agencies, countless conservation groups and corporate social responsibility programs are often largely unsuccessful as well.

The mangroves are often planted in places where they can’t survive, or they’re not maintained, Brown says.

Meanwhile, the mangroves in Tongke-Tongke are thriving. They’re sprawling and sturdy.

But Brown says they still might not fare well in the future. Tongke-Tongke was largely planted with one type of mangrove species, rather than the dozens of different species that records show are native to the east and west coasts of South Sulawesi.

And that’s a problem, because each type of mangrove survives only in a very specific depth of water.

“When undertaking this successful restoration, they failed to restore the original biodiversity,” Brown says. “And so the whole coastal area, and that whole restoration — if sea level continues to rise — is at risk of drowning.”

The residents of Tongke-Tongke don’t seem to be worried about the more distant threat of sea level rise now that waves are no longer washing into their living rooms.

Palaloi says he’s glad the mangroves he’s planted since the early '90s are trapping carbon and serving as some tiny buffer against global warming and future sea level rise.

But his main priority is hyper-local — helping coastal communities protect themselves and make a better living.

He wishes he could have done that for his own family, before their business got swept into the sea.

This story is part of a series on social entrepreneurs working to limit or reverse deforestation in Indonesia. Find more stories here.